On 22 March 2022, the Government of Bangladesh deposited with the International Labour Office the instrument of ratification of the Minimum Age Convention, 1973 (No. 138), becoming the 174th ILO Member State to ratify this Convention. Convention No. 138 is a fundamental Convention which requires States party to take measures to ensure the progressive elimination of child labour and set a minimum age under which no one shall be admitted to employment or work in any occupation, except for light work and artistic performances.

In so doing, Bangladesh reaffirms its commitment towards the fight against the scourge of child labour and to protecting children from work for which they are too young and from work that jeopardizes their health, morals or psychological wellbeing as well as their access to education. Moreover, by ratifying the Convention, Bangladesh is moving ahead towards the achievement of decent work and delivering at country-level the 2030 UN Sustainable Development Goals, in particular SDG target 8.7, which aims at the complete eradication of child labour by 2025 and calls for immediate action to prohibit and eliminate its worst forms.

Bangladesh’s ratification of Convention No. 138 comes at a critical time. Despite the widespread ratifications of Convention No. 138 and the universal ratification of the Worst Forms of Child Labour Convention, 1999 (No. 182) - which Bangladesh ratified in 2001 - the 2020 Child Labour Global Estimates show that there are still 160 million children in child labour, and that the COVID-19 pandemic has had a devastating impact that threatens to reverse years of progress. Alarmingly, child labour rose among young children aged 5 to 11 - there were 16.8 million more children aged 5 to 11 in child labour in 2020 than in 2016 - reaffirming the necessity of effectively implementing the ILO’s child labour Conventions.

Upon depositing the instrument of ratification, Her Excellency, the Honourable Monnujan Sufian, Minister of Labour and Employment of Bangladesh, declared: “In 1972, Bangladesh ratified 29 ILO Conventions, including five fundamental Conventions, in a single day. Today, with the ratification of the Minimum Age Convention, Bangladesh completes its ratification of all fundamental Conventions and relevant Protocols. This is a clear demonstration of our sincere commitment to international labour standards, including those on the elimination of child labour. In this regard, our Government also recently revised the hazardous work list to increase the number of types of dangerous work prohibited to children from 38 to 43, thus providing children with a wider protection against child labour and its worst forms. Indeed, the Government of Bangladesh made a strong pledge to eliminate child labour in all its forms. In pursuit of this goal, we seek the continued support of the ILO.”

In receiving the instrument of ratification of Convention No. 138 by Bangladesh, ILO Director-General Mr. Guy Ryder, stated, “I am particularly pleased to welcome Bangladesh among the States party to Convention No. 138, which sets a minimum age for admission to work or employment. This represents another positive development in the country’s continued efforts towards the full respect of fundamental rights at work. The ratification of Convention No. 138 by Bangladesh could not be more timely. As the latest estimates have shown us, child labour remains an issue of utmost concern globally. Our response must be swift and effective. This is a time for renewed commitment and energy, to turn the corner and break the cycle of poverty and child labour. Today, with the ratification of ILO Convention No. 138, Bangladesh reaffirms its strong commitment to eradicating child labour in the country, and yet again demonstrates that it is steadfast in its efforts aimed at achieving this goal.”

At the national level, the implementation of Convention No. 138 will be supported by the significant measures taken by the Government to combat child labour in the country. In particular, the National Plan of Action on Child Labour aims to eliminate all forms of child labour by 2025, through various objectives, including increased capacity to protect children at the workplace and partnership and multi-sectoral engagement. The Government is also continuing its efforts to ensure inclusive and equitable quality education for all by 2030, through various projects reaching out to thousands of children to provide them with access to vocational training and education.

More information on Convention No. 138 and ILO’s work to combat child labour may be found at /global/topics/child-labour/lang--en/index.htm. 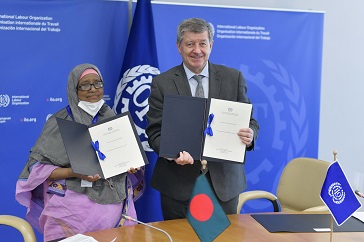