From 4 to 6 February 2015, the ILO Governing Body has convened an international tripartite meeting of maritime and technical experts on border control to advise on the national implementation of the Seafarers’ Identity Documents Convention (Revised), 2003 (No. 185).

Seafarers’ Identity Documents or “SIDs” have been accepted for decades and reflect the historical recognition of the international nature of the shipping industry. Seafarers drawn from all parts of the world often need to transit countries to join or leave ships and while on a voyage may need to come ashore to use seafarers’ welfare facilities and medical facilities or contact their families. These concerns are also reflected in an important convention adopted by the International Maritime Organization (IMO). Most maritime nations have recognized the need of the industry to have seafarers move expeditiously across borders as an essential aspect of the operation of international shipping. However security concerns emerging in 2000 changed the situation. Convention No 185 was adopted by Governments and Shipowners‘ and Seafarers’ representatives at the ILO in 2003 to reflect border security concerns after the events of 2001. Importantly the identity document issued under Convention No. 185 includes biometric information and reflects the concern for other enhanced security protection requirements including an innovative approach to ensuring rapid communication between countries to verify identity documents.

Highlighting the importance of the forthcoming meeting, the Director of the ILO’s International Labour Standards Department, Cleopatra Doumbia-Henry, said “We are now at a critical moment in the implementation of Convention No. 185. It has long been recognized that seafarers need special attention with respect to admission to foreign countries: they work far longer hours than other workers and have to live in their place of work (the ship) on voyages that can last several months. As soon as their ship reaches any port, the first thing they need to do is to go ashore, to telephone their families and to go out and enjoy, for the brief period of the ship remaining in port, the same kind of life and social contact that land-based workers can have every day. It has also long been known that the world economy depends upon maritime shipping, whose efficacy depends upon seafarers being given rapid admission to foreign territories to join or change ship and similar purposes.

“But how can the border authorities of a country be sure that the person requesting admission really is a seafarer? Convention No. 185 provides an effective answer not just through the seafarers’ identity document with biometric and other security features but also with several other components which ensure that the identity document is securely issued, which facilitate authentication of the identity documents issued and which protect the rights of seafarers. But the answer provided by the Convention is not easy to apply in practice and can be expensive for countries with limited resources. In addition, the number of countries that have so far ratified the Convention (29) is insufficient to allow the whole system of secure seafarer identification to properly function.

“We need to see how, especially through international cooperation, the system of seafarer identification under the Convention can be made simpler and less expensive, or at least how the investment involved can be equitably shared. We need to develop a system for the identification of seafarers, with Convention No. 185 at its centre, in which all countries with maritime interests can participate, including countries that have not yet ratified the Convention. Also there have been interesting technological developments in biometrics since the Convention was adopted in 2003. These are the kind of technical, administrative and political questions which will be discussed at the forthcoming expert meeting.”

The ILO International Tripartite Meeting of Experts is expected to consider the cost and benefits of various solutions to concerns and make recommendations for improved acceptance and implementation of SIDs issued in accordance with Convention No. 185. It will also facilitate the exchange of experiences, cooperation and networking among international and national experts. 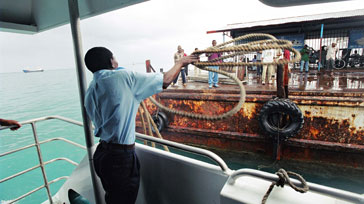