On 8 July 2021, the Government of Norway deposited the instrument of ratification of the Domestic Work Convention, 2011 (No. 189), becoming the 33rd ILO member State to ratify this ground-breaking Convention, and the 10th country in the European region to ratify.

The Convention calls on all countries to extend rights and protections to domestic workers and make domestic work, decent work.

Our latest report shows there's much still to be done https://t.co/rFU4R1MqMA pic.twitter.com/DB9VV3I2tC


Norway has been an ILO member State since 28 June 1919. It has ratified 110 Conventions and 3 Protocols, 73 of which are still in force, including all eight of the fundamental ILO Conventions as well as all four of the priority governance Conventions.

The adoption of Convention No. 189 ten years ago marked an important step toward the realization of decent work for domestic workers, who are often not considered to be workers and are excluded from protections afforded under national labour legislation. The Convention therefore provides for the recognition of domestic work as “work” and the improvement of living and working conditions for the more than 75 million domestic workers throughout the world, who are among the most vulnerable and poorly remunerated workers. According to the 2021 ILO Report on Making Decent Work a Reality for Domestic Workers, over 80 % of domestic workers---twice as many as other workers-- are in informal employment.

As a result, many are deprived of basic labour rights, such as limits on the length of their workday, the right to rest periods and a weekly period of uninterrupted rest, safe and healthy working conditions, a minimum wage that enables them to meet their basic needs, and access to social protection, including sick leave and maternity protection. Moreover, many domestic workers—80 per cent of whom are women—are particularly vulnerable to exploitation, harassment and abuse, due to the particular nature of domestic work in private households. The Convention pays special attention to the issue of violence and harassment at work, as well as to the particular vulnerabilities of migrant domestic workers

In ratifying Convention No. 189, Norway reaffirms its commitment to the fundamental ILO principles of decent work for both women and men. This ratification also supports measures already taken by Norway at the national level to safeguard the rights of domestic workers.

On depositing the instrument of ratification, Ambassador Tine Mørch Smith, Permanent Representative of Norway to the United Nations and other International Organisations in Geneva, stated:

“I am very pleased to deposit the instrument of ratification of the Domestic Work Convention, 2011 (No. 189), which establishes international standards in order to safeguard basic employee rights in the employment relationship of domestic workers. This is of high importance, as domestic workers are not always recognised as employees, which in turn can make them vulnerable tor exploitation and abuse.

“In Norway, the ratification of the Convention required only minor changes in the regulation of domestic workers, as this group already has been recognised as employees. The ratification of ILO Conventions carries great weight and significantly contributes to securing workers' rights at the international level.” 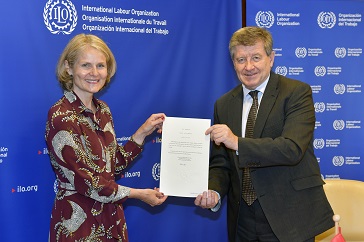