On 13 June 2017, Jamaica deposited with the Director General of the ILO the instruments of ratification of the Maritime Labour Convention, 2006, as amended (MLC, 2006) as well as of the Protocol of 2014 to the Forced Labour Convention, 1930.

Jamaica is the 84th Member State of the ILO that ratifies the land-mark Maritime Labour Convention, 2006, as amended (MLC, 2006). Jamaica has a strategically important position within the global liner shipping network and is considered to be a hub in the global network in view of the high level of connectivity it offers despite a relative low level of trade.

Through the ratification of the Protocol, Jamaica follows in the footsteps of 13 other countries spread out all over the world. It takes the lead in the Caribbean region in the fight against forced labour. A total of 21 million people are victims of forced labour around the world and the ILO estimates that this exploitation generates some US$150 billion a year in illicit profits. The Forced Labour Protocol requires governments to adopt new measures designed to prevent all forms of forced labour, including trafficking in persons, to protect victims and guarantee them access to justice and compensation.

On depositing these two instruments of ratification, Ms Shahine Robinson, Minister of Labour and Social Security, stated that “in ratifying the Maritime Labour Convention, as amended, 2006, Jamaica is demonstrating its commitment to ensure decent working conditions for seafarers through the application of international standards while facilitating global commerce. Jamaica boasts the premier maritime training institute within the English-speaking Caribbean and is also one of the major logistics hubs in this region. Given this background, Jamaica sees the ratification of this Instrument as a natural and key step in securing the rights of seafarers within our jurisdiction in keeping with the highest global standards”.

The Minister of Labour and Social Security also declared that “the ratification of the Protocol to the Forced Labour Convention reflects Jamaica’s commitment to combat trafficking in persons and reject forced labour in all its forms. Jamaica has a strong legal framework and a national taskforce that works to combat trafficking in persons. We will do our part in the renewed global effort to eradicate all forms of forced labour.”

On receiving these instruments of ratification, the Director-General of the ILO, Mr Guy Ryder, stated: “I am very pleased to count Jamaica among the States parties to these two Instruments dealing with particularly important subjects: maritime labour and forced labour. These ratifications are a further testimony to Jamaica’s ongoing commitment to promote and implement decent work and fundamental rights at work. The ratification of the Protocol demonstrates its involvement in efforts to eradicate forced labour in the sub-region and brings us one step closer towards reaching the target of the 50forfreedom campaign – 50 ratifications by the end of 2018. In addition, through the ratification of the Maritime Labour Convention, as amended, 2006, Jamaica is also joining the global effort to promote decent living and working conditions for seafarers while ensuring a level playing field in the maritime industry.” 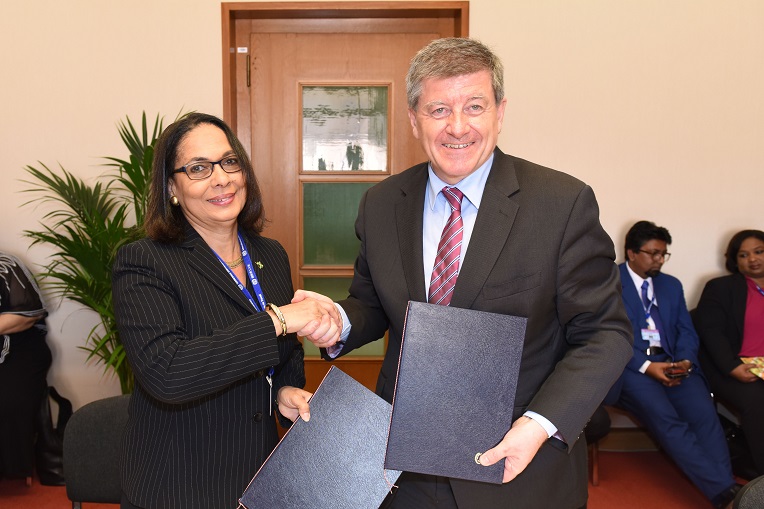