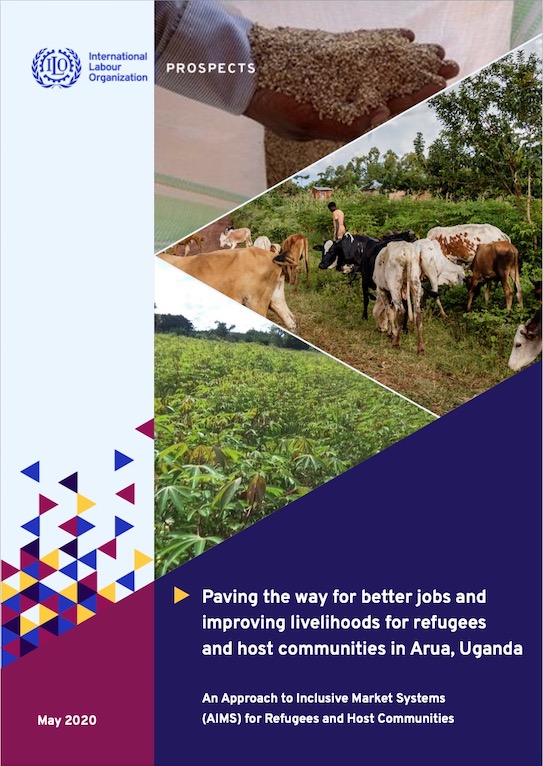 Download:
Uganda has long been known for its progressive policies towards refugees, who are guaranteed fundamental rights including the right to work and establish business, access to education, freedom of movement and access to documentation for identification. Furthermore, refugees are allocated land for shelter and agricultural use. However, a worsening domestic security situation in the Democratic Republic of the Congo (DRC), coupled with conflicts sparking in South Sudan, caused Uganda’s refugee population to nearly triple since July 2016. Uganda is currently hosting more than 1.3 million refugees, making it the third-largest hosting country for refugees worldwide.

In this context, between July and October 2019, the ILO conducted an integrated enterprise and market systems assessment in Uganda in Arua District, in the context of the “Partnership for improving Prospects for host communities and forcibly displaced persons” (PROSPECTS). The purpose of the assessment was to identify local sectors and value chains with potential for growth, profitability and employment for refugee and host communities. The analysis then determined how the identified value chains could be developed to include both refugees and host communities in the labour market, and how to enhance the overall functioning of the value chain to create more and better jobs. The study also elucidated skills and capacities of the target group, as well as barriers that prevent them from accessing employment and economic opportunities in local value chains.

The assessment provides the knowledge base from which targeted interventions to promote economic opportunities for refugee and host communities in Arua will be developed in the context of PROSPECTS. Subsequently, the selected value chains and the recommendations do not constitute an exhaustive list of ILO intervention areas but are rather to be seen as an evidence-based contribution to the ILO’s intervention plan.