5 December 2013
"Today, a country, a continent and the entire world are united in grief as we mourn the passing of Nelson Mandela, a truly exceptional human being. Personally, and on behalf of the International LabourOrganization, I extend my heartfelt condolences to his family and my deepest sympathies to the people and the Government of South Africa.

We have lost a champion of freedom, of tolerance and of dialogue. With grace, humility and dignity he towered above us all in his pursuit of peace and social justice. The world has been enriched by his passion, his commitment, his perseverance, his integrity and, above all, his humanity."
Read the full statement by ILO Director-General, Guy Ryder

Jailed for 27 years, Nelson Mandela, leader of the movement to end South African apartheid, is released on February 11, 1990. On 8 June 1990, in one of his first visits to an international organization following his release from prison, he paid tribute to the ILO for its struggle against apartheid. 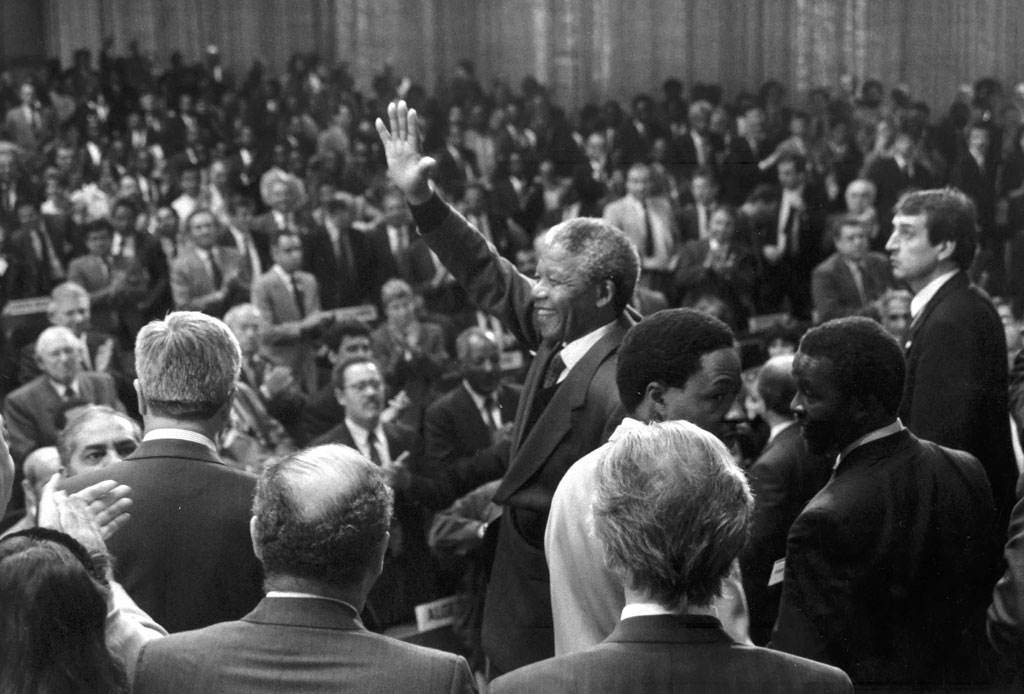 Jailed for 27 years, Nelson Mandela, leader of the movement to end South African apartheid, is released on February 11, 1990. In June 1990, the 77th Session of the International Labour Conference played host to Nelson Mandela, at the time Deputy President of the African National Congress (ANC). 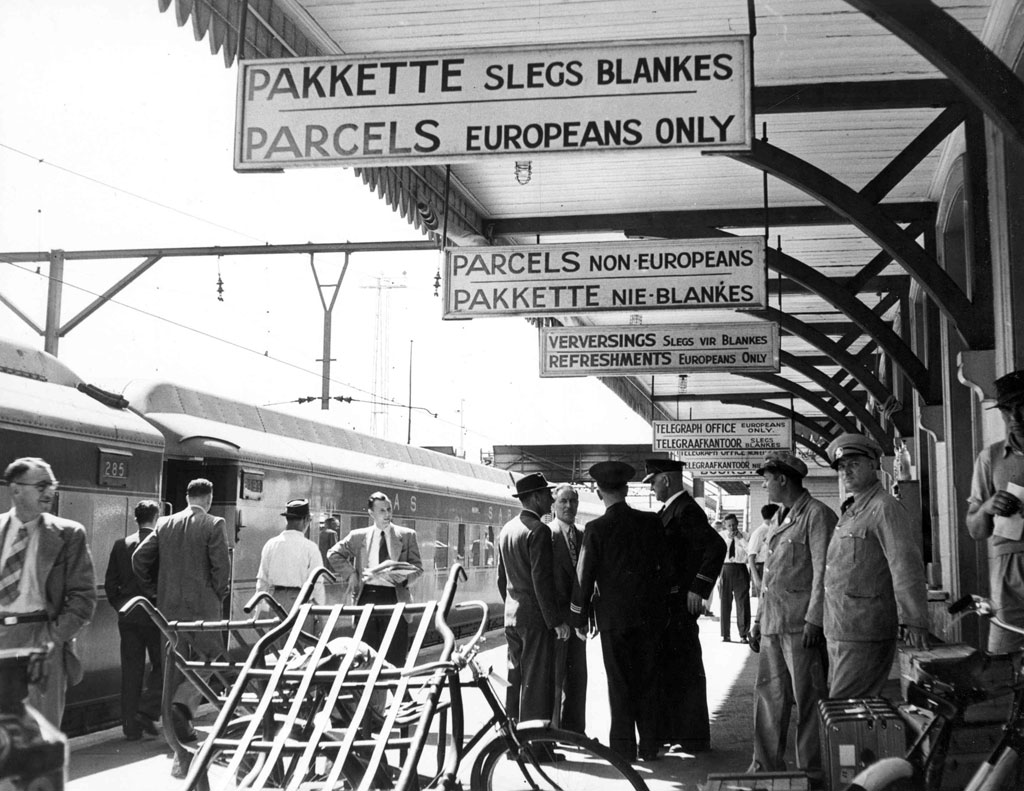 In 1948, South Africa decided to set a policy of “separate development” of the population according to their race. In a few years several laws were passed to ensure the separation. Marriages of mixed races were prohibited, racial groups were assigned different areas of settlement and different amenities; Communism was declared illegal, and political parties the South African Government chose to label as “Communist” were forbidden. In 1956, a law on work and mines formalised racial discrimination in employment. Progressively the opposition to that policy grew in South Africa, in Africa, and all around the world. In 1960, the Sharpeville Massacre alerted the world to the seriousness of the situation. 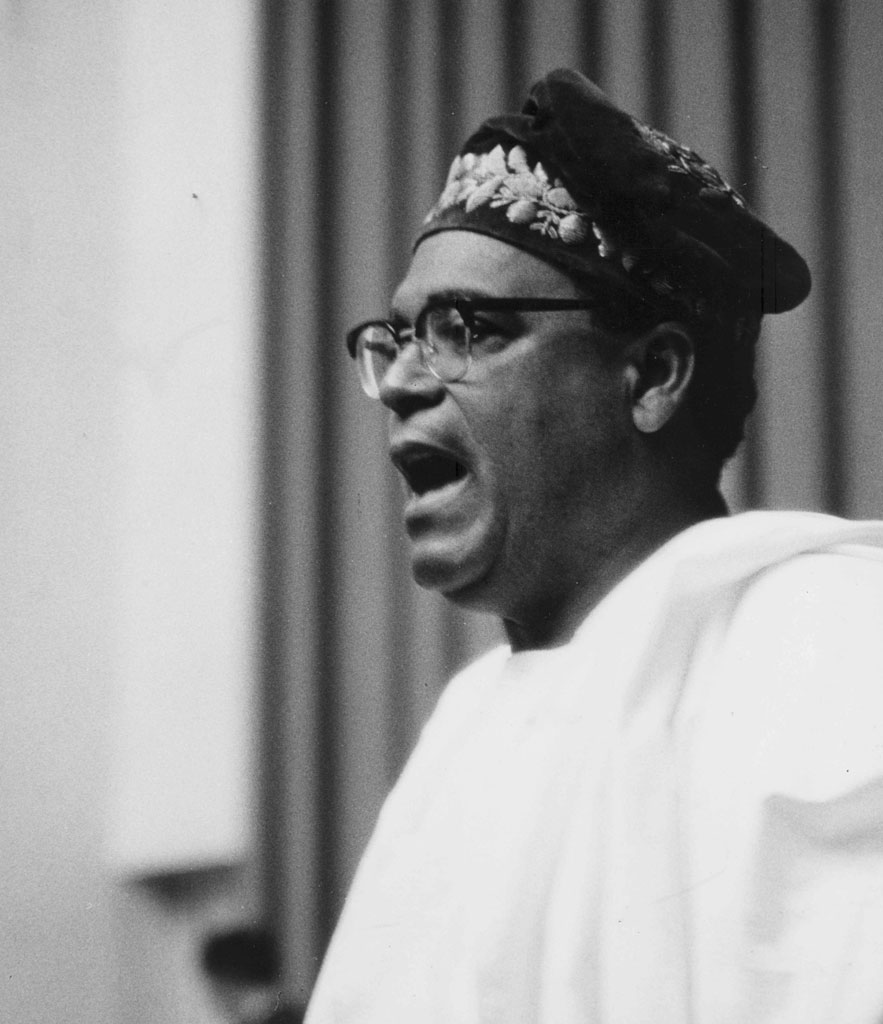 With the Sharpeville Massacre, Apartheid took a prominent spot in the discussions of the ILO. The situation became tense in 1961 with the 45th Session of the International Labour Conference: Nigerian Government delegate Joseph Modupe Johnson presented a resolution condemning Apartheid and requesting the Governing Body to advise the Republic of South Africa to withdraw from the ILO. 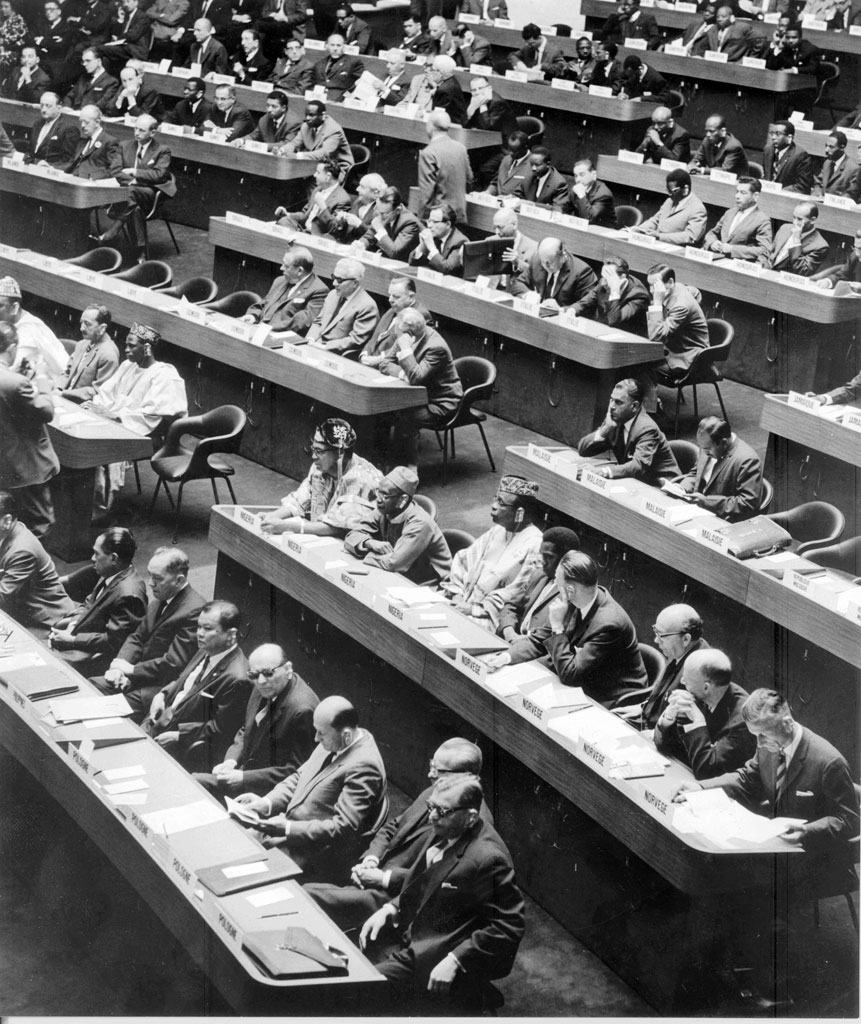 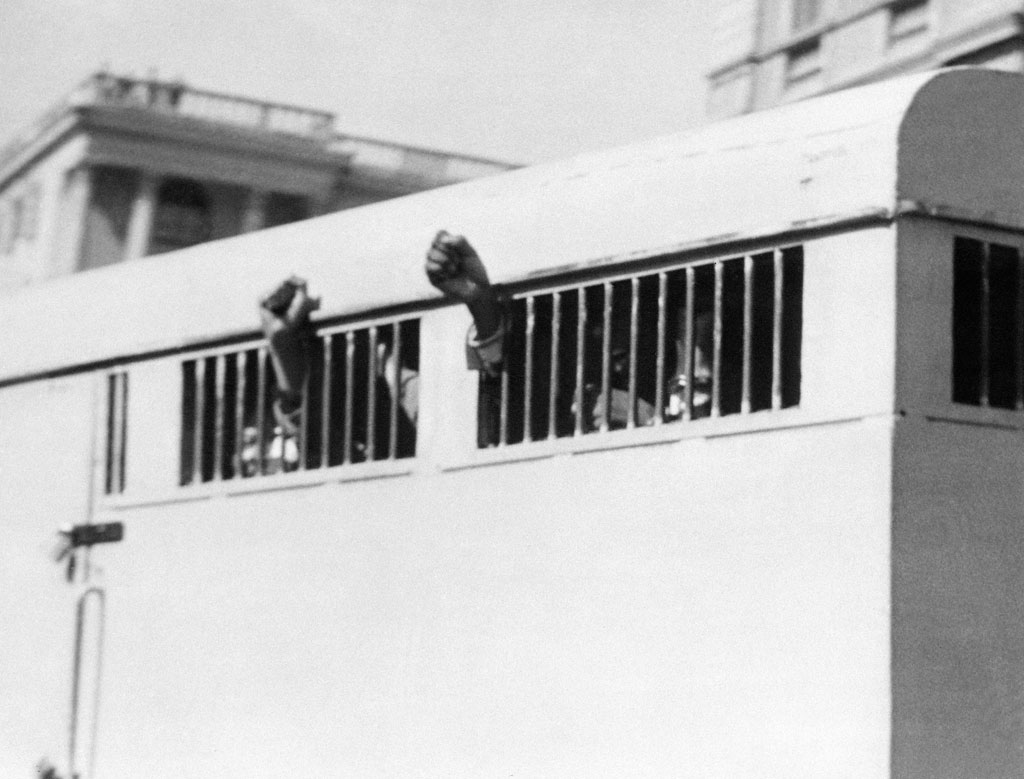 In Pretoria 16 June 1964, eight men, among them anti-apartheid leader and African National Congress (ANC) member Nelson Mandela, sentenced to life imprisonment in the Rivonia trial leave the Palace of Justice with their fists raised in defiance through the barred windows of the prison car. The eight men were accused of conspiracy, sabotage and treason.
© AFP 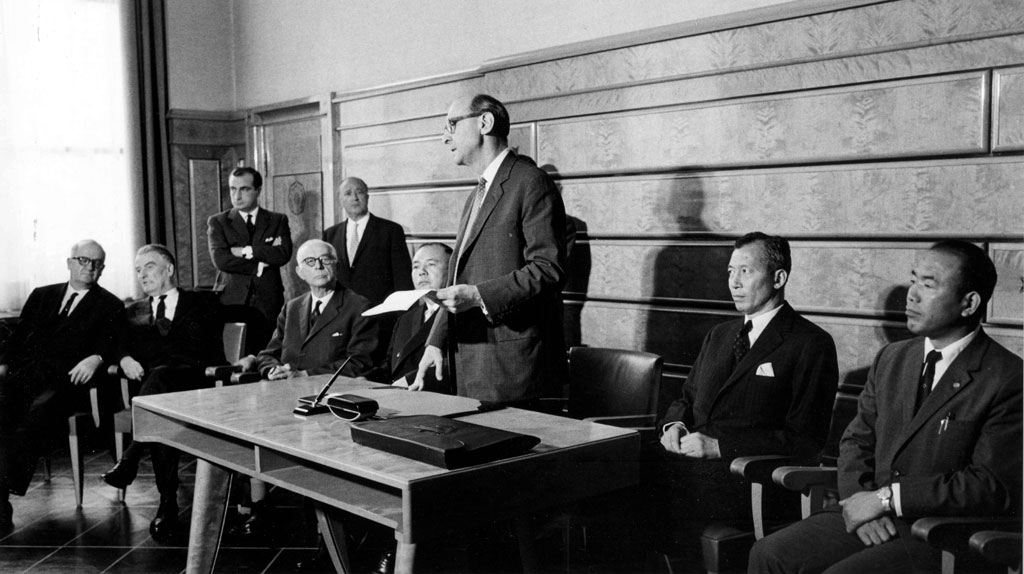 In a letter of 11 March 1964, the government of South Africa informed the ILO's Director-General David Morse that as the South African worker delegate’s credentials had been revoked at the 1963 International Labour Conference, as South Africa was to be excluded from the Governing Body of the ILO and as South Africa encountered much opposition in the ILO, it had decided to withdraw from the Organization. 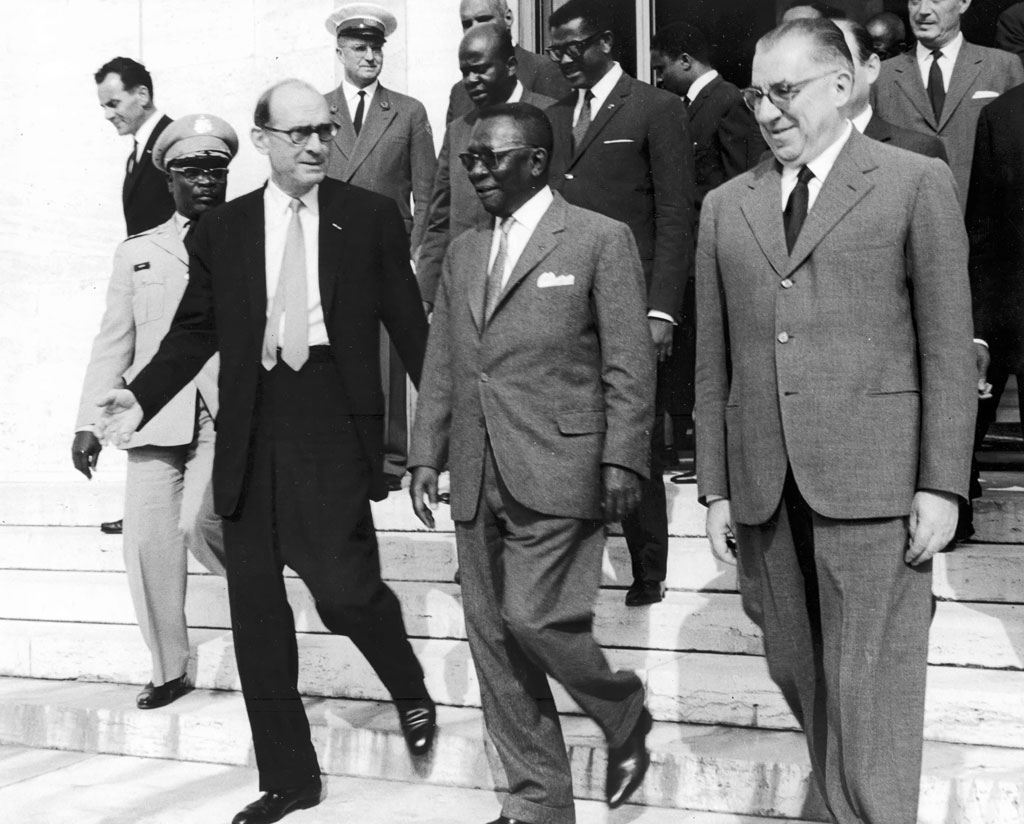 The 48th Session of the International Labour Conference took note of the withdrawal of South Africa and voted an amendment which would empower the Conference to suspend from participation in the International Labour Conference any Member which had been found by the United Nations to be flagrantly and persistently pursuing by its legislation a declared policy of racial discrimination such as apartheid. (ILO Director-General David Morse with the President of the Republic of Liberia, Mr. William V.S. Tubman)

Jailed for 27 years, Nelson Mandela, leader of the movement to end South African apartheid, is released on February 11, 1990.
Four months later, then Deputy President of the African National Congress (ANC), he addressed the 77th Session of  ILO's International Labour Conference, and paid tribute to the ILO for its struggle against apartheid. 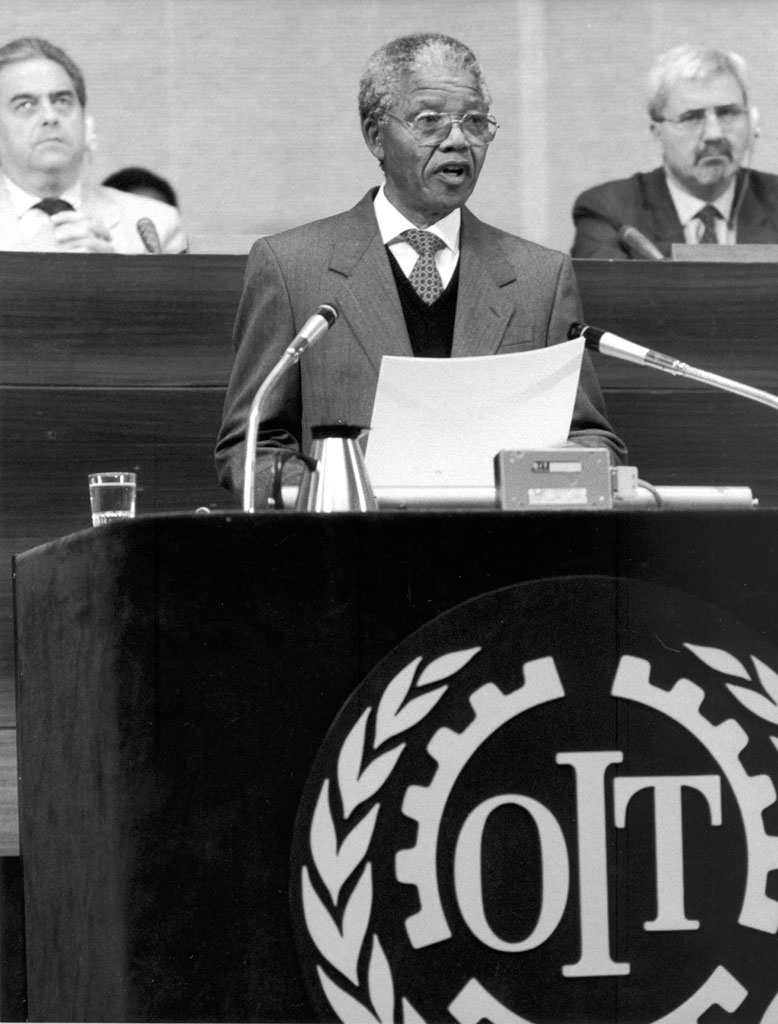 "Despite the thickness of the prison walls, all of us in Robben Island and other jails could hear your voices demanding our release very clearly. We drew inspiration from this. I knew from the very first day of our incarceration that in the end it would prove impossible for the apartheid system to keep us in its dungeons. We thank you that you refused to forget us. We thank you that you did not tire in your struggle. We thank you for your sense of humanity and your commitment to justice which drove you to reject the very idea that we should be imprisoned and that our people should be in bondage." 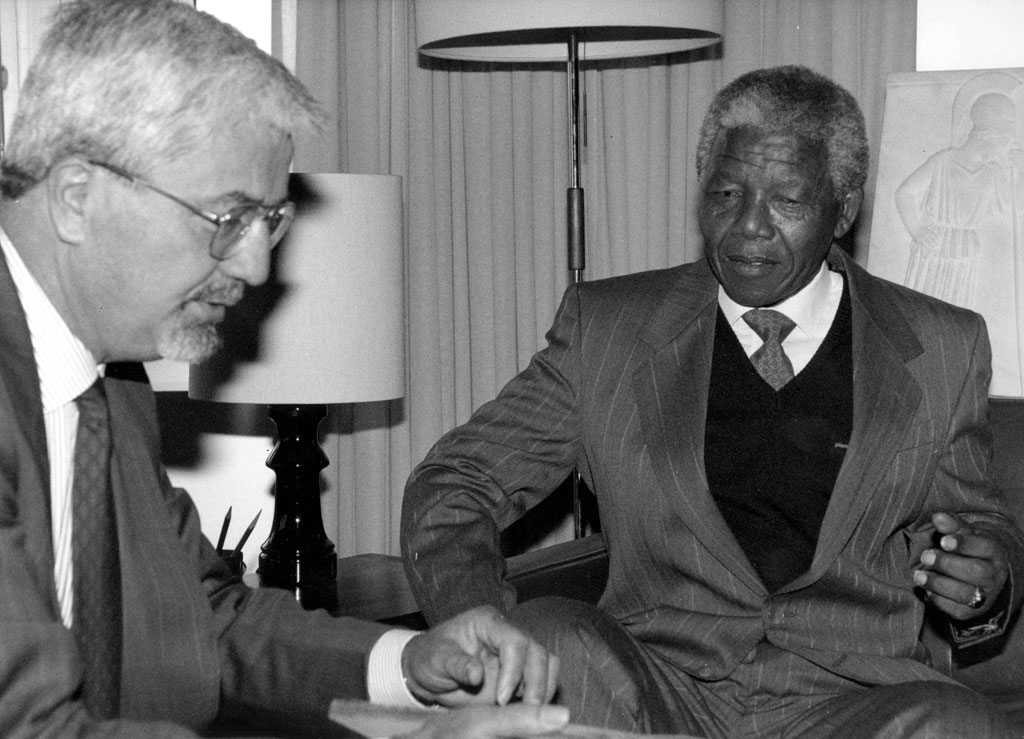 Director-General of the ILO Michel Hansenne and Nelson Mandela, in discussion during the 77th Session of the International Labour Conference, Geneva, June 1990. M. Mandela had closed his speech at the ILO with these words:
"Let us walk the last mile together. Let us together turn into reality the glorious vision of a South Africa free of racism. Free of racial antagonisms among our people. No longer a threat to peace. No longer the skunk of the world. Our common victory is certain." 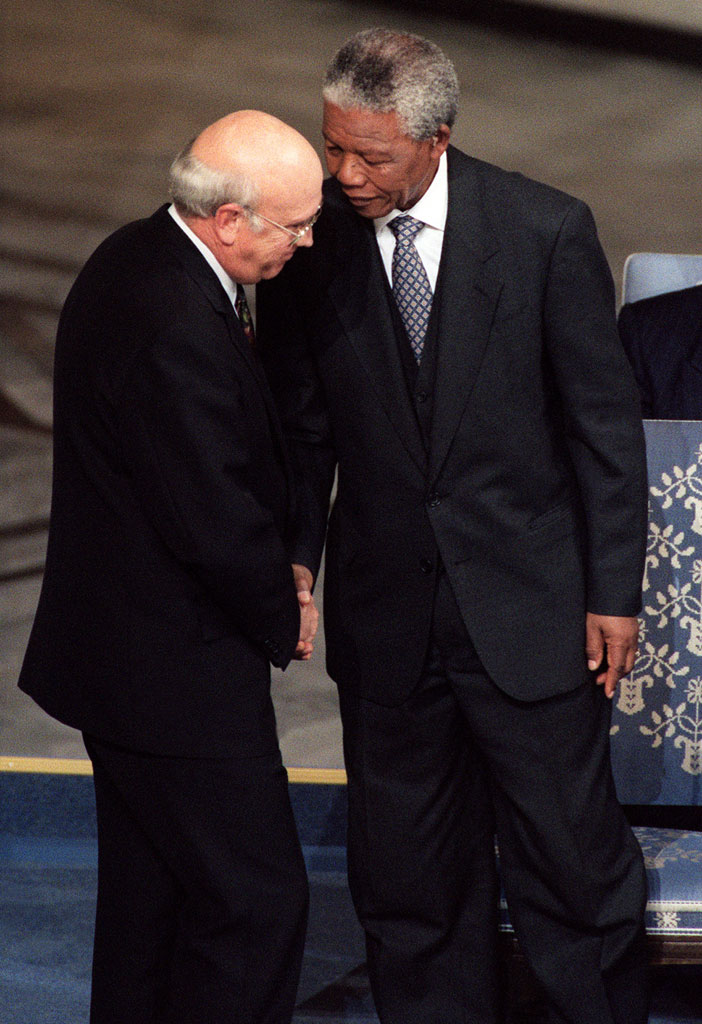 In 1993, Nelson Mandela and South African President Frederik W. de Klerk were jointly awarded the Nobel Peace Prize "for their work for the peaceful termination of the apartheid regime, and for laying the foundations for a new democratic South Africa".
© Gerad Julien /AFP 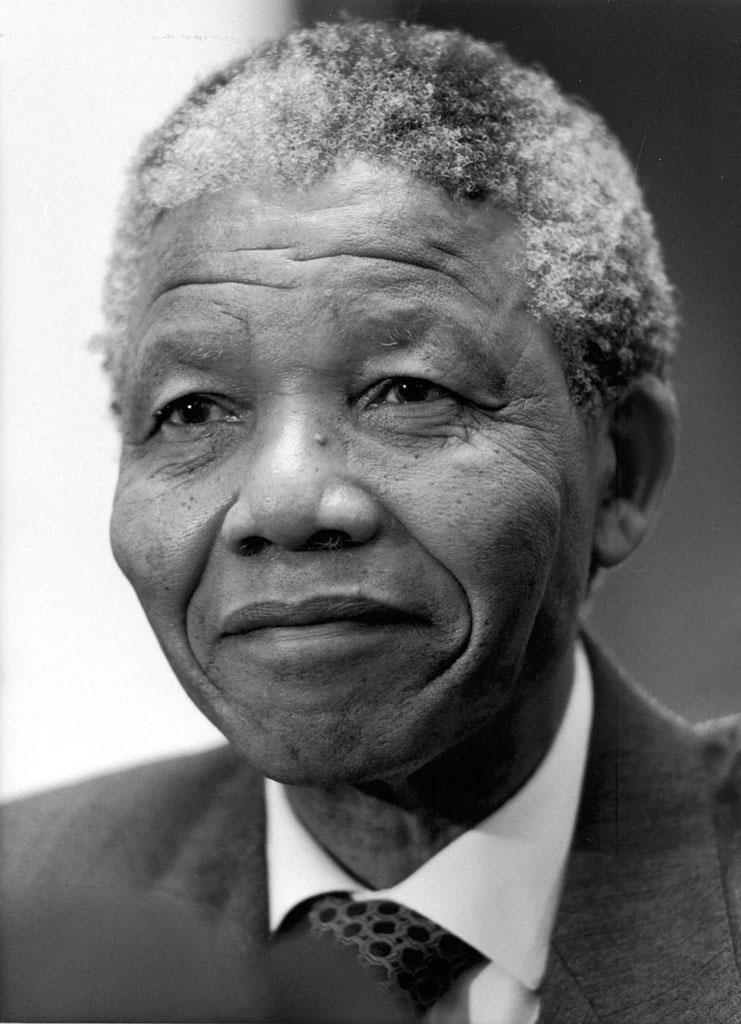 South Africa rejoined the Organization on 26 May 1994, three years after the official abrogation of the apartheid laws and ten days after the election of Nelson Mandela as President of the Republic. 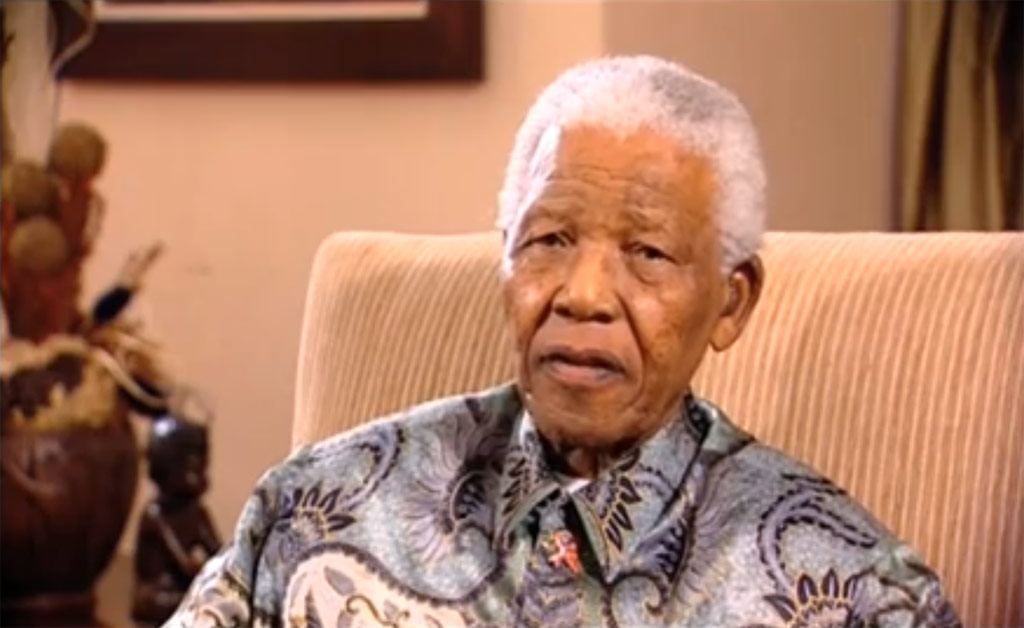 In June 2007, ILO awarded its first annual Decent Work Research Prize jointly to Nelson Mandela and Professor Carmelo Mesa-Lago, in recognition of their unique personal contribution to improving the lives of people around the world. Nelson Mandela thanked the ILO in a video message in which he called on the ILO to "continue its struggle to make decent work a global reality”.
© ILO

Watch Mandela's addresses at the ILO