This story was written by the ILO Newsroom For official ILO statements and speeches, please visit our “Statements and Speeches” section.
GENEVA (ILO News) – International Labour Organization Deputy Director-General Gilbert Houngbo, on behalf of co-vice chair of the commission and Director-General of the ILO Guy Ryder, has emphasised that realizing the goal of ensuring healthy lives for all by 2030 will require a major increase in the global health sector workforce especially in low and lower middle income countries.

Speaking at the inaugural meeting of the newly-created UN High-Level Commission on Health Employment and Economic Growth in Lyon (France), Houngbo warned: “The need for health professionals in low and middle income countries is far outstripping the numbers of medically trained workers entering the profession; by 2030 the gap could be 18 million.”

Houngbo added that health workforce shortages could easily double when also considering the number of jobs that are needed to provide essential support to the health sector.

The ILO also pointed out that the international migration of health workers was increasingly becoming what Mr Houngbo called “a mechanism for brain drain” from developing countries which already lack skilled workers.

“Our challenge is to help countries develop policies that enable at least part of that huge number of job seekers to find decent and productive employment in improving health care,” he said.

Stressing that two thirds of workers employed in the sector are women, Houngbo also insisted on the importance of respecting health workers’ rights such as gender equality, freedom of association and social dialogue to establish resilient health sectors capable of retaining committed and well-trained staff.

The new Commission appointed by the UN Secretary-General is co-chaired by François Hollande, President of France, and Jacob Zuma, President of South Africa with the heads of ILO, WHO and OECD acting as co-vice chairs.

It is expected to deliver recommendations to the UN Secretary-General in September 2016. 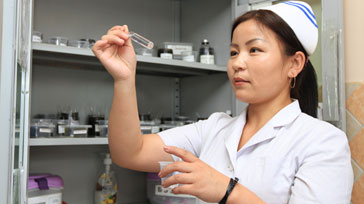