This story was written by the ILO Newsroom For official ILO statements and speeches, please visit our “Statements and Speeches” section.
ATHENS (ILO news) – The Director-General of the International Labour Organization (ILO), Guy Ryder, has reaffirmed the commitment of the ILO to support Greece in reviving its economy and fighting unemployment.

Ryder was in Greece today following an invitation by the Greek Minister of Labour, Social Insurance and Social Solidarity, George Katrougalos. He met several government representatives, including Vice-President Ioannis Dragasakis, to discuss the economic and social situation of the country in the context of the fifth consecutive year of fiscal consolidation and structural adjustment.

Referring to the Government’s 2016 budget proposal, which foresees additional economic and social reforms, Ryder said: “It is the ILO’s intention to assist the Greek Government in addressing the social and labour impacts of the current economic situation and to promote collective bargaining and social dialogue, in full respect of the International Labour Conventions ratified by Greece.”

The ILO and the Greek government also agreed on further ILO technical assistance.

“We agreed on the further provision of ILO technical assistance in the context of important MoU -related reforms under consideration, mainly in the areas of labour law and industrial relations. ILO technical assistance will aim at curbing unemployment through the strengthening of active labour market policies and the social economy in Greece. The ILO will also enhance the efforts of the Greek government to fight undeclared work and informal economy,” said Ryder.

The ILO Director-General participated in a Tripartite Round Table Discussion on Strengthening Social Dialogue, organized by the Greek social partners as signatories of the National General Collective Agreement. Employers’ and workers’ representatives introduced a “Joint Plan of Action” aimed at identifying ways of improving social dialogue mechanism in the country.

Ryder invited the Government and the social partners to urgently explore consensus-driven solutions to address the problems resulting from unemployment, underemployment and informal jobs.

At the end of the meeting the social partners agreed to work together to undertake an impact assessment of certain provisions of the MoU.

The official visit of the ILO Director-General came at a time of important reforms in the country, including in the area of labour law, pensions and the broader industrial relations framework. Since 2010, Greece has been implementing a fiscal consolidation and economic reform program in exchange for a multi-billion euro bailout package.

Greece expects its economy to contract by a further 0.7 per cent in 2016 as the result of measures designed to curb budget expenditures and increase revenue. These measures aim to achieve a primary budget surplus (before interest payments) of 0.53 per cent of the country’s GDP in 2016, up from a primary deficit of 0.20 percent this year.

Roughly one in every 4 workers in Greece is unemployed, with youth disproportionately affected. It is estimated that three-quarters of the unemployed have been without work for more than a year. 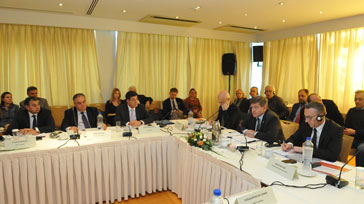