GENEVA (ILO news) – Leaders from Arab countries met at the International Labour Organization's Governing Body here today in a session dedicated to discussing ways to ensure a more equitable future in the Arab world, with the respect of fundamental rights at work, employment and social protection as a basis for sustainable growth.

The discussion was introduced by Dr. Ahmed El-Borai, Minister of Manpower and Migration of Egypt; Mr. Habib Yousfi, President of the General Confederation of Algerian Enterprises (CGEA); and Mr. Abdessalem Jerad, General Secretary of the Tunisian General Labour Union (UGTT).

At the beginning of the session, ILO Director-General Juan Somavia referred to “a time when all actors of society are called upon to exercise their responsibilities so that they will be on the right side of the history being made in front of your eyes by the peaceful popular expression of the people’s will”, adding that “we at the ILO must be ready to assist them”.

The Director-General particularly insisted on the value of social dialogue: “The recent turn of events is extremely worrying…if people are shot and killed, dialogue is rejected. No short or medium term economic or social benefits can come out of such confrontation”. 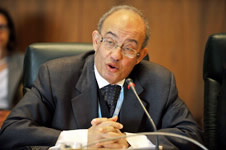 Dr. Ahmed El-Borai, Minister of Manpower and Migration of Egypt

Dr. Ahmed El-Borai qualified the Egyptian revolution as a model for “peaceful and rational changes in the region and the whole world”. He identified it as the inception of a “new development process” leading to “a better future based on freedom, dignity and social justice”.

He asked the ILO’s worldwide constituency to listen to the ILO and "reinforce its role in order to launch a genuine development process, a development-led globalization which serves the real economy, including the most needy in society”. He said that his government is determined “to continue along the path of democracy and human rights”, including the establishment of independent trade unions, with full respect to freedom of association. 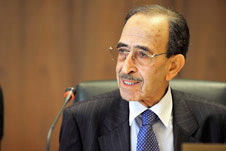 He welcomed the ILO Director-General’s strategic initiatives in several countries in the region, insisting on values and rights, as “an example of political courage: You were at the right place at the right time, encouraging young people to seek a greater degree of freedom.” 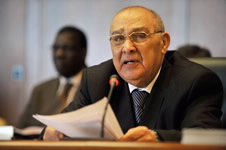 Mr. Jerad asked the ILO “to be at the forefront of support for his country…we all are one family that can work in peace and democracy – the success of Tunisia and Egypt can serve on a much greater scale.”

The panel presentations before the Working Party on the Social Dimension of Globalization of the ILO Governing Body were followed by a lively discussion on the various policies, strategies and measures to ensure a more sustainable social and economic development in the region.

“The ILO needs to work jointly with the International Monetary Fund (IMF), the social partners and key experts in the countries concerned to develop a social and economic roadmap”, said Michael Sommer, chairperson of the German Trade Union Confederation (DGB).

Daniel Funes de Rioja, Vice-President of the International Organisation of Employers (IOE), reminded the audience that “a critical foundation for meeting the challenge will be harnessing the power of policy dialogue and harnessing the expert input and ideas provided for good policy making. Dialogue with the business community will be vital. The private sector has an essential role to play, not only with respect to job generation but also in the future economic progress of states throughout the Arab world”.

One aim of the high-level discussion on “Challenges and Change in the Arab World” was to highlight the role of the ILO in this process of renewal so that the changes being forged meet with the fundamental concerns of governments, employers and workers and the whole society in the region for achieving decent work.

In this context, the ILO Director-General called for strategies to reduce youth unemployment, to reinforce democratic governance and social change, including freedom of association and collective bargaining, to enhance social justice, a fair sharing of wealth, the establishment of a universal social protection floor, and the empowerment of trade unions and civil society actors. The overall aim is to promote employment and rights through robust social dialogue structures and institutions.

During an official visit to Egypt on 12 - 13 March, Director-General Somavia expressed strong ILO support for the establishment of freedom of association and other labour market and economic reforms in Egypt and the Arab world.

Interview with Habib Yousfi, President of the General Confederation of Algerian Enterprises (CGEA)

"Challenges and Change in the Arab World": Director-General’s Introductory Remarks to the Working Party on the Social Dimension of Globalization