Your Excellency Dr Pagwesese David Parirenyatwa, Minister of Health and Child Care, Chair of the PCB,
Michel Sidibé, Executive Director of UNAIDS,
Ministers,
Members of the PCB,
Ladies and Gentlemen,

I am really very pleased to be with you today and for the chance to speak on behalf of the Cosponsors.

First of all, let me thank Michel for his unwavering leadership of the global HIV response. Under that leadership, the coordinated efforts of the UNAIDS family have contributed to transforming the AIDS response and turning the tide of the epidemic. The results of these efforts are visible, considerable and well reflected in the Report of the Executive Director.

I would also like to congratulate Zimbabwe for its role as Chair of the PCB. We are sure that under your leadership, the 36th PCB will be guided to a successful conclusion.

Cosponsors are strongly committed to this Joint Programme. Our joint working relationship has ensured that the HIV response has been tackled through a multi-sectoral approach which has enabled us to simultaneously address the short term prevention and treatment goals, as well as the longer term structural drivers of the epidemic. The complementarity of these different perspectives of our individual and joint work was clearly evident during the PCB field visit to Zimbabwe.

We should not forget that there were moments when we feared that the AIDS epidemic would defeat us. But the strong commitment of governments, donors and the scientific community, as well as the dedicated engagement of stakeholders from all walks of life, including the private sector, employers’ organizations, trade unions and others, did not let this happen.

Today, the end of AIDS as a public health threat in 2030 is within reach and we are privileged to be able to contribute to that goal.

I would particularly like to acknowledge the pivotal role played by people living with HIV and members of vulnerable and marginalized populations who came forward, dared to face stigma and discrimination and demanded to be heard. They are our true heroes of this success story.

So let me just mention a few of the facts behind that success:

New HIV infections and AIDS-related deaths continue to fall. Access to life saving antiretroviral therapy has increased so much that we expect to achieve and surpass the 2015 target of putting 15 million people on treatment. There has been a significant reduction in new infections among children. Domestic financing is increasing in many low and middle income countries.

Optimism must however, be tempered with a note of caution because that success is important. Progress must not make us complacent. There are still challenges to be addressed.

The success of HIV prevention efforts is not uniform. AIDS still remains the leading cause of death among adolescents in Africa and the second leading cause of deaths worldwide. Availability and access to male and female condoms remains a challenge and even though significant progress has been made in scaling up good-quality, age-appropriate comprehensive sexuality education further advocacy is needed to address persistent misconceptions. Less than 40% of people living with HIV are receiving antiretroviral therapy. Three out of four children with HIV do not have access to treatment. And only one in ten people living with HIV and injecting drugs is receiving treatment.

Despite its importance in enhancing adherence and effectiveness, food and nutrition have not been consistently promoted as part of the antiretroviral treatment package. People living with HIV are frequently denied healthcare, employment, education and social protection opportunities. Women continue to face multiple forms of discrimination and exclusion and some populations have been left behind in our response.

The expanding scale and magnitude of humanitarian emergencies in the world today is also increasing the vulnerability of persons affected by emergencies to HIV. The prisoner population, though very vulnerable, is often forgotten. Since most prisoners will return to the community, we will fail to halt the spread of HIV in communities if we fail in prisons. Finally, international donor funding appears to be static or declining at a time when we need to fast track our response. And that is also a source of concern.

What has the CCO done so far?

This year marks a turning point for the global development agenda. This year gives us an opportunity to pause, to reflect and to assess our work to date, while charting a new way to fast track the response and end AIDS by 2030. Michel has spoken about the “fragile window of opportunity” of the coming years and the price of failure as well as of the new Strategy and Unified Budget Results and Accountability Framework (UBRAF). Allow me to speak briefly about the CCO’s contribution to these efforts.

The CCO recommended to the Executive Director, the development of a 6-year UNAIDS Strategy which was endorsed by the PCB. The fast-track approach is a timely and critical step towards ending AIDS by 2030.

As with the SDGs, delivering on the ambitious goals of the new UNAIDS Strategy will require a strong focus on the means of implementation. In this context, the CCO tasked the UNAIDS family to explore ways in which the Joint Programme could be fit for purpose in the post 2015 era, and recommendations have been made in three key areas: delivering results; doing more with the resources available; and strengthening accountability.

Based on a request from Michel, Heads of Agencies have also made direct inputs into the new Strategy.

With regards to the new UBRAF, we expect to better demonstrate the added value of the Joint Programme and how we can work differently to achieve the goals of the new Strategy. Our allocative and implementation efficiencies have to be improved. The days of doing everything everywhere will be followed by the days of doing the most important things in fewer places so as to maximize impact.

How will the ILO contribute to the UNAIDS vision?

Over the next five years, the ILO will focus its resources on four key areas.

First, global unemployment -already dramatically high- will continue to increase over the next 5 years with young people being disproportionately affected. Almost 74 million young people were looking for work in 2014 and youth unemployment today is practically three times that of adults. This disproportionately high level of youth unemployment increases vulnerability and high risk behaviours, which in turn has a direct consequence on HIV incidence. Our focus would be to ensure that HIV initiatives are well embedded within on-going youth employment and income generation programmes.

Fourth, 19 million people are unaware of their HIV status. Achieving the 90-90-90 treatment targets is dependent upon scaling up HIV testing. The workplace offers a unique opportunity to reach vulnerable young people and adults, with HIV testing services. This is the reason why Michel and I launched the VCT@WORK Initiative in June 2013. It is gaining significant momentum in many high impact countries and the valuable lessons learned will inform our work beyond 2015.

The post-2015 development agenda provides a framework for progress on several fronts. Draft SDG 3 includes a target to end the AIDS epidemic by 2030, and several other draft SDGs address the structural drivers of HIV, including gender inequality, poverty, human rights violations, violence, employment, education and many more. And the draft SDGs on health issues provide tremendous opportunities to address the socio-economic determinants of HIV and health.

As we frame the new UBRAF, we have to ensure that it responds to the identified gaps in our response – these gaps include data, evidence, populations, gender, HIV testing, treatment and locations, to name just a few.

We need to be innovative in identifying diversified sources of funding. In the past, AIDS resources supported other MDGs. Now, we must explore how resources from other SDGs can contribute to the AIDS response.

We must invest more strategically in partnerships with the private sector. Mobilizing the private sector and leveraging its comparative advantage, would contribute significantly to achieving the fast track targets. We live in an era of technology-driven transformation that is also redefining healthcare and development delivery. The HIV response can and must benefit from that.

We have a strong joint programme inspired by a dynamic Secretariat. We are now supported by a strong ECOSOC Resolution. We will soon have a new Strategy and UBRAF. Next year we look forward to a UN General Assembly meeting on AIDS and a Special Session of the UN General Assembly on the World Drug problem. All of which mean that we are well positioned to fast track our work.

In a race, how we run the last mile determines whether we win or lose. We need to run fast; we need to run together, we need to do it more smartly with no one lagging behind and leaving no one behind. 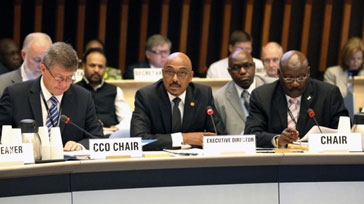