The global tide against forced labour is rising and we have seen significant progress in ending this scourge. But the job isn’t done yet, because modern slavery still is, unfortunately, big business and millions are suffering.

The ILO estimates that forced labour generates illicit profits of US$ 150 billion every year. About two thirds of those profits are made from exploitation – mainly of women and children – in the sex and entertainment industry.

But slavery also brings profits to unscrupulous employers in agriculture, construction, manufacturing, mining, domestic work and other sectors which harbour the majority of those subjected to forced labour.

And it knows no geographical boundaries, touching lives in the North and South alike.

Headway has been made in the form of stronger laws and policies. Workers have joined forces and organized themselves in sectors where forced labour persists. Companies have taken action to eliminate forced labour from their supply chains. And there is a growing movement of citizens who call for an end to the suppression of and discrimination against their fellow-citizens.

Since the ILO called for a Global Alliance against Forced Labour in 2005, the worldwide movement against this inhuman practice has grown day by day. Leaders from governments, business, trade unions, the arts and the media have stood up and taken action.

But we need to do more.

We need to tackle the socio-economic root causes of modern slavery, such as traditional land tenancy systems, as well as unregulated labour sourcing and recruitment practices. We need to improve the lack of access to education and skills for people who live in poverty and suffer discrimination. We must fight the oppression of workers who seek to join trade unions. And we must ensure stronger law enforcement to stop human trafficking once and for all.

In June 2014, representatives of governments, workers and employers from the tripartite ILO’s 185 member States overwhelmingly supported the adoption of new legally binding standards against forced labour. The Protocol of 2014 to the Forced Labour Convention, 1930 (No. 29) and its supplementary Recommendation No 203 proclaim new obligations and provide guidance to secure the effective eradication of forced labour, trafficking and slavery-like practices.

We call on governments to ratify the new Protocol rapidly and to step up action at home and abroad.

We call on workers’ and employers’ organizations – actors in the real economy – to strengthen their action against forced labour.

And we call on all who are striving for this goal to support the ILO’s Global Alliance against Forced Labour.

Looking ahead, let us also ensure that the post-2015 Sustainable Development Goals include strong commitments to eradicate all forms of slavery and forced labour of adults and children.

Today, as we focus on eradicating contemporary forms of slavery, we reaffirm our commitment to end these practices in word and deed once and for all. We owe this to future generations and, most urgently, to the millions of women, men and children who are denied the right to live and ultimately work in freedom, dignity and equality.

Let us all join forces to end slavery in the 21st century. 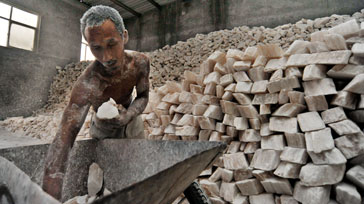