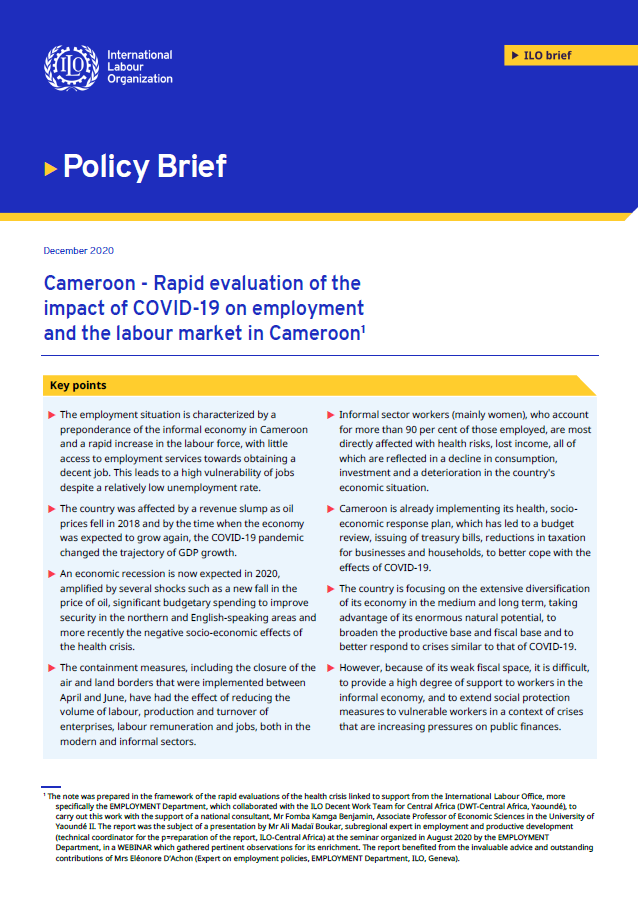 Download:
The employment situation in Cameroon can be characterized by the large size of its informal economy, as well as a rapid increase in the labour force. This has led to high vulnerability of jobs, despite low unemployment rates. Prior to the onset of the pandemic, the country, an oil exporter, was somewhat affected by the sharp decline in oil prices in 2018, and the COVID-19 crisis has changed the expected recovery from that downturn into an unexpected contraction. The employment impact of the crisis has been mostly via containment measures and trade, having an incidence on the volume of labour, production and turnover of enterprises, labour remuneration and jobs, both in the modern and informal sectors, and less via community spreading. Informal workers (which are 90% of all employed), and mostly women, are most likely to be affected by the health risk, income losses. Also, there will be second round effects as income falls, which is expected to lead to a decline in consumption and investment.

Cameroon is already implementing its health and socio-economic response plan, which has led to a budget review, issuing of treasury bills, reductions in taxation for businesses and households, to better cope with the effects of COVID-19. Additionally, the country is focusing on the extensive diversification of its economy over the medium and long term. However, because of its weak fiscal space, it is difficult, to provide a high degree of support to workers in the informal economy, and to extend social protection measures to vulnerable workers.