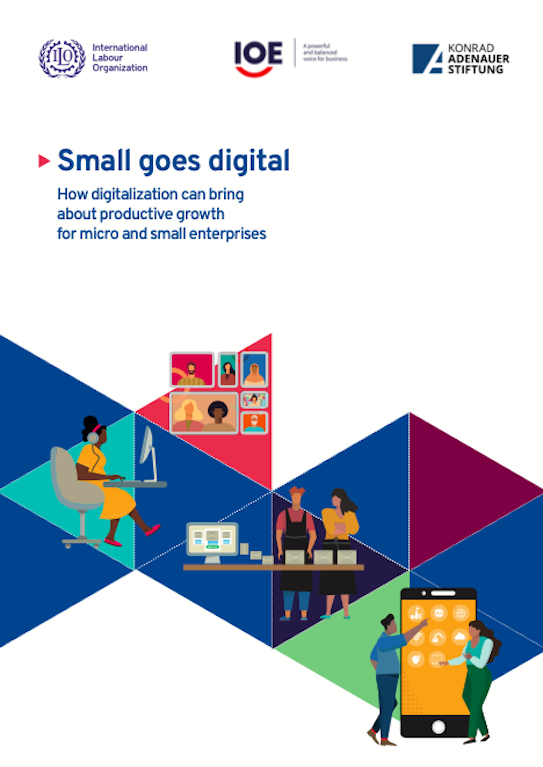 Download:
Over the past decades, the dissemination of technology and digital infrastructures has opened up new and seemingly unparalleled opportunities for sustained growth and innovation. Markets have become more interconnected, digital products and services have mushroomed around the world, and digital innovations have helped to improve productivity and competitiveness.

However, a significant yet often overlooked segment of the global economy has remained largely excluded from the benefits of the “digital revolution”: micro and small enterprises (MSEs) tend to be under-digitalized and may therefore struggle to exploit fully the opportunities afforded by digitalization. This is an especially alarming problem given that MSEs play a critical role in economies and societies as creators of jobs and as drivers of growth and poverty alleviation.

It is important to create an environment in which MSEs are enabled to harness digitalization for productivity growth and for the creation of more and better jobs. This report takes into account the diversity of MSMEs, and paints a nuanced picture of the barriers as well as the opportunities involved in the digitalization of MSEs and its contribution to productivity growth and job creation.

This report and its policy recommendations should be regarded as a call to action in its own right. The COVID-19 crisis has put tremendous strain on MSEs and slowed down progress towards the Sustainable Development Goals. Competitive MSEs that provide decent work can be engines of recovery and prosperity for the societies in which they are based. Supporting MSEs in the use of digitalization to improve their resilience and competitiveness is paramount to achieving this.