LIMA, Peru – The COVID-19 crisis highlighted the shortcomings of social protection systems in Latin America and the Caribbean, and placed the challenge of improving their coverage, adequacy, and sustainability on the regional agenda to help mitigate increases in poverty and inequalities as well as to face new emergencies in the future.

"The effects of the pandemic were amplified by millions of people without social safety nets and in the face of losses to income and jobs, while health systems were on the verge of collapse," said Vinícius Pinheiro, ILO Director for Latin America and the Caribbean during his presentation of a new study on social protection in the region.

Before the pandemic, only 56 per cent of the region's inhabitants were covered by some form of social protection. Contributory systems, which depend on the contributions of workers and employers, include only 46 per cent of the employed.

"The vast majority of the employed population did not have unemployment insurance or other ways to compensate income, especially those who were in informality," stated Pinheiro. "A lesson of this pandemic is that the lack of social protection makes us more vulnerable."

The ILO technical note "Overview of social protection in Latin America and the Caribbean: Progress and setbacks in the face of the pandemic" reviews the social protection situation in the region and challenges for the future, including the need to be prepared for new crises such as those caused by climate change.

The ILO publication emphasizes the need to move towards "comprehensive protection systems, based on a social protection floor with guarantees for universal access to health and economic safety throughout the lifecycle."

"Social protection is fundamental for social inclusion and cohesion, the reduction of poverty and social inequalities, while facilitating productive transformation and improving productivity," said Pinheiro.

The ILO report highlights that as a result of the COVID-19 crisis, it is estimated that contributory social protection systems registered a 7.9 per cent drop in the number of contributors, which meant a setback of almost a decade.

At the same time, in the last year-and-a-half the health emergency and its consequences placed unprecedented pressure on non-contributory systems which depend on fiscal resources, and which were essential to cushion the impact of the crisis.

As of June 2021, 273 non-contributory measures had been implemented in the region, of which 64 per cent were new programmes and the rest were adaptations of existing programmes.

The report adds that the most common policies were to protect jobs and incomes, food delivery and nutrition care and health-focused policies.

"Spending focused on mitigating the COVID-19 crisis has made it possible to counteract the increase in poverty and extreme poverty, where the countries that allocated the most resources are the ones that have most avoided the increase in poverty," the technical note advises. Particularly households with children and adolescents who depend on the income generated by workers in the informal economy saw their vulnerability and exposure to the risks of child labour increase.

Pinheiro added that in the current context of recovery from an unprecedented crisis, "it is essential to adapt and expand social protection, we have witnessed how social benefits have been the first line of defense for those who lost their income and at the same time constitute an important engine to stimulate economic activity.”

The report notes that there is a correlation between inequality and contributory social security coverage. Only 20 to 40 per cent contribute when they are part of the lowest income quintiles of the population.

Similarly, as economic units grow, the greater the coverage. In companies with 20 or more people, all countries have coverage that exceeds 60 and even 80 per cent. Conversely, most economic units with five or fewer people have a coverage level of less than 20 per cent.

In the case of economic security for older people, it is proposed that this is "a pending challenge", since according to the most recent data 30 per cent of those over 65 years of age in Latin America and the Caribbean do not receive any type of employment income or a pension.

"The pandemic has been difficult for everyone but for the elderly it has been especially difficult, both because of the impact of the contagion, and because of the lack of income, which left them in a particularly vulnerable situation," said Pinheiro.

In the post-pandemic period, the future of social protection faces "a complex combination of challenges," according to the ILO report.

These include the need to move towards social protection floors that guarantee minimum benefits for all people, expand policies for the child population, expand unemployment insurance, offer universal health protection, and at a time of crisis such as the current one "guarantee the sustainability of financing, especially amidst high levels of debt and inflationary processes." Governance is another critical dimension for the future of social protection.

"At the time of publication, the socio-economic recovery remains uncertain and assigning more resources for social protection will remain crucial,” advises the technical note. 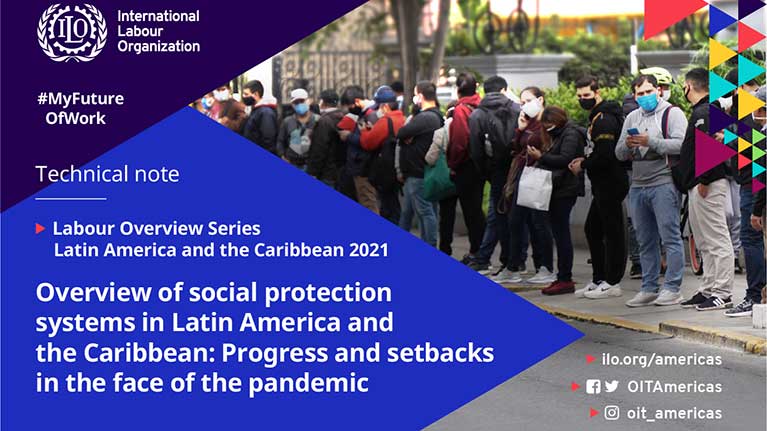 Overview of social protection systems in Latin America and the Caribbean: Progress and setbacks in the face of the pandemic - Technical note [pdf 596KB]
Skip to top