8 September 2021 (Lima, Peru) - The economic recovery in Latin America and the Caribbean is still insufficient to recuperate the jobs lost during the pandemic, and has given rise to a labour market characterized by a high unemployment rate and a strong prevalence of informal occupations, highlighted a new ILO technical note released today.

“Neither the quantity nor the quality of jobs that this region requires to cope with the aftermath of an unprecedented crisis are being created. The labour overview is complex and poses challenges of great magnitude,” announced Vinícius Pinheiro, ILO Director for Latin America and the Caribbean when presenting the publication.

"In 2021, informal jobs are leading the partial recovery of employment," added Pinheiro. "These are jobs that are generally unstable, with low wages, without social protection or rights."

The ILO Director added that, “the close link between labour informality, low income and inequality has become even more evident in this context.”

The technical note “Employment and informality in Latin America and the Caribbean: An insufficient and uneven recovery” reviews the changes detected in labour markets, income and inequality in recent months. It also addresses both the impacts of the crisis and the recovery of jobs as some economic activities have restarted.

About 70 per cent of the jobs generated from mid-2020 to the first quarter of 2021 are occupations in conditions of informality, according to data from a group of Latin American countries, the ILO technical note advises.

"In the first quarter of 2021, around 76 per cent of independent workers, and just over a third of wage earners, were informal," adds the technical note. It also explains, "Although it is premature to state that there is a process of informalization of previously formal employment, taking into account the experience of previous crises, this is a significant latent risk.”

The publication analyzes the dynamics of informality as a result of the pandemic, highlighting an atypical behaviour, since unlike other crises, informal occupations did not increase or offer refuge for those who lost formal jobs.

On the contrary, the measures necessary to face the health crisis had as a correlate a strong impact on the destruction of informal employment and the loss of income among people who worked in these conditions, who found themselves without social protection safety nets, and without the possibility of accessing reduction of hours or teleworking options. In many cases, this even led to a temporary reduction in informality rates in some countries.

With the new scenario of a more intense impact of informal positions, it is possible that in many countries the informality rate is similar, or even higher than that observed before the pandemic, when it affected around 51 per cent of the employed.

Along with informality, the region is experiencing an insufficient recovery of jobs, according to the data in the technical note. Most notably the reduction in employment between the first and second quarters of 2020 at the worst moment of the COVID-19 crisis was just over 43 million jobs.

“The subsequent recovery from that point to the first quarter of 2021 was around 29 million. Therefore, the increase in jobs did not fully compensate for the previous loss,” the publication highlighted. About 30 percent of the jobs lost have yet to be recovered.

This yields for the first quarter of the current year a value of 59 per cent of the economic participation rate and 52.6 per cent of the employment rate – in both cases the lowest in at least a decade – and an 11 per cent unemployment rate, which implies that around 32 million people were actively looking for a job without finding it.

The reduction in the participation rate has been a peculiarity of this crisis, during which millions of people preferred to leave the labour force at the prospect of looking for jobs that were not available. When many of these people return to look for work, added to others who will need income after the crisis, there will be additional pressures both on the unemployment rate and on the levels of informal employment.

The ILO technical note also reveals that women, youth and the lower-skilled have been disproportionately affected by the contraction of employment and incomes, and are more strongly affected by the unequalizing and poverty-increasing impacts of this crisis in the region.

Roxana Maurizio, ILO Labour Economics Specialist and author of the technical note highlighted that, “in the case of women, there was a decline in labour participation after decades during which there had been an increase in their inclusion in the workforce. It has been more than 15 years since there has been such a low rate of economic participation for women."

Faced with a labour outlook characterized by an economic recovery with insufficient improvement in employment, "the region needs to adopt a comprehensive, consensual and far-reaching human-centered policy agenda that underpins the creation of more formal jobs," Maurizio explained.

The measures must go hand in hand with strategies to rebuild the production apparatus, including the creation of new companies and the increase in productivity of those companies that managed to survive the crisis.

The technical note advises that the measures particularly focused on improving job creation seek to prevent the crisis from continuing and leaving long-term social and labour scars.

"The uneven rates of job recovery among different groups of workers and the growing levels of inequality and poverty can not only severely limit economic growth, but can also increase the degree of social unrest in the region," cautioned the publication. 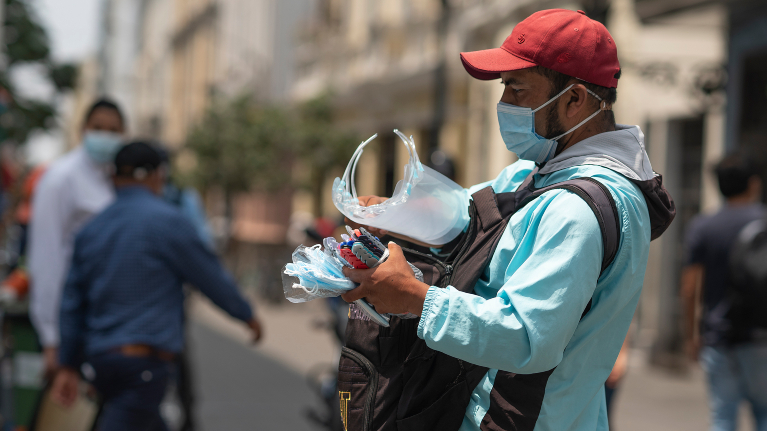 Technical Note - Employment and informality in Latin America and the Caribbean: an insufficient and unequal recovery [pdf 2677KB]

ILO to release new analysis on "Employment and informality in Latin America and the Caribbean: An insufficient and uneven recovery"
Skip to top