On Friday 15 December, Guyana became the first Caribbean country to officially sign on to the second phase of its Decent Work Country Programme (DWCP). The programme, which ran its first phase from 2012 to 2015, is propelled by the joint efforts of the International Labour Organization (ILO) and the Ministry of Social Protection of Guyana.

Delivering the keynote address at the launch, Prime Minister of Guyana, the Honourable Moses Nagamootoo urged those present “to focus on the national agenda, where we want to take our society, how we want to improve the lives of our people and how we can make Guyana a country where there is sustainable livelihood based on the availability of decent work, based on the availability of an environment where working people are considered to be an important part of our social development and not just wage workers”.

Minister within the Ministry of Social Protection, with responsibility for Labour, Honourable Keith Scott noted the 2017- 2021 programme is an updated version of the first Decent Work Country Programme launched in 2012. He explained that the two-year hiatus between the two programmes was as a result of the shortcomings in the initial programme however, he was confident that the new DWCP addresses the flaws of the previous version.  “I must submit that by itself the Programme can achieve nothing but it will require the inputs and willing co-operation of all Stakeholders to make it operational and functional. This programme was crafted in the spirit of tripartism and it will require the same spirit and philosophy to make it work.

Prime Minister Nagamootoo acknowledged the social partners present for their collaborative efforts in tabling the DWCP whose implementation is to be overseen by a tripartite committee led by the Ministry of Social Protection.  He said, “There is much more work to be done in Guyana to improve our job creation, to improve the investment climate, to be able to build perfect partnership.”

ILO Caribbean Director, Claudia Coenjaerts explained the relevance of the DWCP, “Jobs are key to both social and economic prosperity, and not just any jobs but decent jobs. We realize that good jobs which get people out of poverty don't just flow out of an investment or economic diversification strategy.  More than ever, world of work issues permeate every other aspect of policy-making. Ministries of labour have a key role in actively engaging in national planning and bringing in the social partners.”

The DWCP focuses on improving working conditions, nurturing a sustainable environment for enterprises and fostering cooperation among employers, workers and the government. The ILO Director noted that Guyana has already made some progress as illustrated by the World Bank’s ease of doing business ranking which shifted from 137th in 2015 to 126th in 2017. She pointed to Guyana’s national competitiveness strategy which highlights international investment as being critical to the expansion of the economy.

Over the past year the ILO worked closely with the Ministry of Business and CAGI on an in-depth review to determine how to create an enabling business environment which promotes sustainable enterprises. This study titled ‘Enabling Environment for Sustainable Enterprises in Guyana’ was presented at the same event. 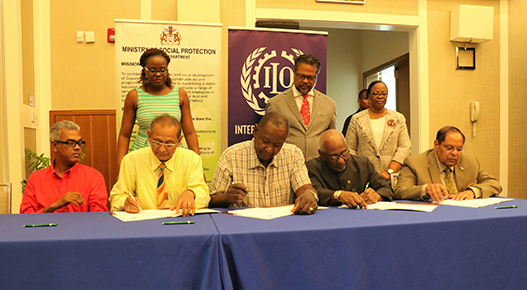