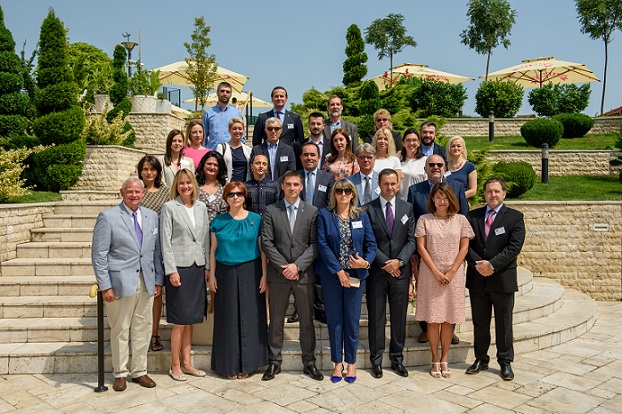 The meeting brought together directors of bodies for peaceful settlement of labour disputes and labour conciliators  from Bosnia and Herzegovina[1], Bulgaria, Montenegro, Romania, Serbia, and the former Yugoslav Republic of Macedonia, with the view of discussing legislative trends, sharing case management experiences and identifying future up-skilling needs. The event was organized by the Employment and Social Affairs Platform (ESAP), a regional ILO project financed by the European Commission in the amount of 3 Mio Euro and jointly implemented by ILO and the Regional Cooperation Council

Realization of collective and individual labour and socio-economic rights in the Western Balkan countries is a pre-condition for continued social consolidation and social convergence on the path to the EU membership. Amicable settlement of labour disputes is an effective extra-judicial means of ensuring the attainment of those rights and inclusive access to justice in a faster and cost-efficient way. ESAP supports the development of mechanisms for alternative settlement of labour disputes so that it becomes a viable option for workers and employers.

The ESAP project facilitates an interactive sharing of experience and good practices through the creation of a sub-regional Network of Agencies for Peaceful Settlement of Labour Disputes in CEE countries and the establishment of a sub-regional case database. An Inter-Agency Memorandum of Cooperation signed in November 2017 formalized the Network, and laid the ground for systematic multilateral cooperation and cross –border transfer of know-how among its members.

Mr. Zoran Djordjevic, Minister of Labour, Employment, Veteran and Social Policy of Serbia stated that the main task of the Agency in Serbia is to provide an efficient, fast and free access to justice through making alternative labour dispute resolution available to workers and employers.

“The Government and the Ministry want to encourage workers to be much more assertive and to openly address problems arising in the workplace with their employers, as well as to raise the awareness and the responsiveness of the employers when it comes to the respect of labour rights” said Minister Djordjevic.

He emphasized the significance of the tripartite social dialogue and added that the Agency has got the leading role in the process of harmonization of industrial relations, as the only national institution specialized in settlement of collective labour disputes.

The meeting covered a variety of topics relevant for the enhancement of amicable settlement of labour disputes in the region, including harmonization of legislation and practice among the Network members and best ways to manage difficult cases. Network members provided updates on new developments in their respective countries with case studies. They found that procedures applied for dismissals of union members/representatives vary between Network member countries.  The Network will work on exploring how to encourage employers and workers to rely more on extra-judicial Alternative Dispute Resolution services, which continues to be a key policy question in the sub-region.  Further improvements to the case database available at esap.online were discussed, including a quality insurance mechanism and a multi-language feature. The database is an important source of information for comparative solutions to common legal challenges in addressing individual labour disputes.

At the meeting, the sub-regional comparative report on individual labour dispute resolution systems was launched as a summary of research commissioned by the ILO. ILO will continue to provide technical support for reforming current institutions and processes through enhancing inter-agency policy dialogue and transfer of know-how. The development of the regional case database and the establishment of a common set of performance criteria will also be carried on.

The event benefited from the outstanding experience of Mr. Scot Beckenbaugh, deputy director of the US Federal Mediation and Conciliation Service.

*Republika Srpska
**as defined by the UN Security Council Resolution 1244.