Within the framework of the GAP-MDW multi-year European Union funded programme ending 31 July, trade unions, government and other social partners have worked together to promote decent working conditions and human rights protections for Ukrainian domestic workers migrating to Poland.

The demand for domestic and household care workers has increased significantly in recent years in Poland. The unfavourable economic situation in Ukraine and the economic gap between the two countries are the most important drivers of cross-border labour migration for Ukrainians, the largest foreign community in Poland. “Based on our research, we have seen that the number of migrant domestic workers from Ukraine is growing and that Poland is increasingly becoming a destination country for them”, said Sergiy Savchuk, ILO National Coordinator in Ukraine.

Domestic work is an occupation characterized by informal labour, a situation shared by nationals and migrants. However, the situation for migrants is more precarious as they are particularly vulnerable to labour and human rights abuses “We are talking about workers without voice and representation. They are not members of trade unions in Ukraine because they are working in Poland and they are not members of trade unions in Poland because they are Ukrainians”, said Maria Elena Valenzuela, Chief Technical Adviser of the ILO GAP-MDW project.

Recent advocacy efforts have led to the Ukrainian Parliament integrating ratification of the ILO Domestic Worker’s Convention into a national action plan. These efforts have also contributed to the drafting of new legislation to regulate and formalize employment of domestic workers.

In addition to sharing knowledge and experience gained, the Bi-national Workshop was an opportunity for partners to strategize on future collaboration as the Global Action Programme on Migrant Domestic Workers concludes.

Speaking on next steps following the GAP-MDW initiative, Yurii Kurylo, Vice-President of All-Ukrainian Association of Workers’ Solidarity (VOST-VOLIA), said, “We have to move in two directions: legislative - to promote the ratification of ILO Convention 189; and in a practical direction jointly with the Polish trade unions to produce agreements to improve the lives of Ukrainian migrant domestic workers in Poland.”

“In the case of bilateral agreements, the trade unions can have a very important role protecting migrant domestic workers, promoting their rights, and amending the policy agenda”, said Maria Elena Valenzuela.

“All the proposals emerging from this lively debate will be analysed. Backed by the strong evidence-base earlier collected by the Programme these can then be framed as a project proposal for possible funding,” said Sergiy Savchuk.

Grigor Gradev, ILO Workers' Activities Senior Specialist,  also signaled a continuation of the important work started in Ukraine and Poland under the GAP-MDW. “We are already in the first steps of a [new] joint project”, he said.

Keep the conversation going, make sure to follow @ILO on Twitter and keep checking the tag #GAPMDW to see how the work with migrant workers not only in Ukraine and Poland, but also globally, progresses. 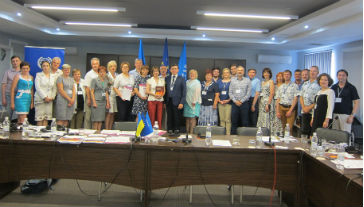