The labour market navigated the pandemic well, but headwinds may hamper further improvements

The transition of Poland in the last three decades is considered a development success story. The country moved from middle to high income status in less than 15 years, entering the group of high-income countries in the mid-2000s. The economy expanded rapidly with growth rates of 4 to 5% per year, job and income growth were broad-based, and prosperity was shared. While in the early 1990s, per capita income was 38% of the EU average, it now reaches 76%.

Labour markets benefited from these developments and experienced an impressive turnaround. While unemployment was still at 20% in 2000, the country has currently one of the lowest unemployment rates in Europe at 3%, while the employment rate is slightly higher than the EU average (74% vs 72%).

The Covid-19 pandemic caused a relatively mild economic recession in 2020 with a reduction of GDP of less than 3% (EU: -6%). Meanwhile, the recovery in 2021 was strong and Poland is expected to lead all EU countries in GDP growth in the period 2020-23. The short-term impact on labour markets was also relatively low with 2% of all working hours lost when compared to 2019 (EU: 7.4%), and a recovery in 2021 already beyond 2019 levels. Employment and unemployment rates including youth unemployment did not change much when compared to pre pandemic times, with the economy rather facing pressure of overheating, as inflation started biting in the second half of 2021. The strong government response to the pandemic was decisive to mitigate the labour market impact. The response package was worth 15% of GDP and one of the largest in the region. The main measures included income support for individuals and greater liquidity for businesses. There is some uncertainty around the effectiveness of the package as verifiable information is lacking, and measures were designed and implemented without consulting the social partners.

Remaining challenges from before the pandemic are a quickly ageing workforce, high emigration, and a relatively low female employment rate, resulting in a shortage of labour that could become a major growth hurdle. As a result, workers from outside the EU play an important role in the labour market. Before the pandemic Poland issued the highest number of first residence permits for work-related reasons in the EU, mostly to Ukrainian citizens.

Further challenges are high job insecurity with Poland having the highest share of temporary and atypical contracts in Europe. Women, older people, persons with disabilities, and those with lower qualifications participate in the labour market much less than in other EU countries. The low availability of childcare is one of the key reasons for the relatively low employment rate of women. Despite the high gender employment gap of 16%, the gender pay gap remains rather low at 8%. Income inequality and the share of people at risk of poverty have shown a decreasing tendency during the last decade but are still higher than in other countries of the region.

The war against Ukraine which has a long border with Poland is another source of uncertainty with a large number of Ukrainian refugees coming to Poland.

The cooperation between the ILO and Poland

Poland was one of the founding members of the ILO in 1919.

Viewed from a historical perspective, the most important milestone of the cooperation between Poland and the ILO was the dispute to provide a legal status to Solidarnosc, Poland’s most famous free trade union movement established in 1980. From there, the road ultimately led to free elections in Poland and many other countries in Central and Eastern Europe, European Union membership, and Poland’s new role in the international arena.

Since the early 1990s, ILOs support to Poland focused on reforming labour markets in the context of a transition from a centrally planned economy to a socially responsible market economy. The next major step was to advise Poland on aligning labour market and social policies with EU directives preparing the country for EU membership. After EU accession in 2004 ILO supported active labour market policies, minimum wage policies, and rights based labour emigration of Polish workers.

Today, Poland joined the group of ILO’s development partners making voluntary contributions to the technical work of the ILO in other countries. In 2015, Poland supported a project strengthening labour inspections in Ukraine. 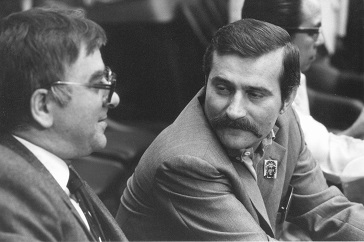