“This report clearly shows that in many countries, the crisis has had a strong impact on wages – and by extension, workers,” said ILO Director-General Guy Ryder. “But the impact was not uniform.”

The report points to huge differences between countries and regions, with wages generally growing faster in areas where economic growth is stronger.

While wage growth suffered a double-dip in developed economies – where it is forecast at zero per cent in 2012 – it remained positive throughout the crisis in Latin America and the Caribbean, as well as Africa, and even more so in Asia.

The biggest changes were seen in Eastern Europe and Central Asia, which went from double-digit pre-crisis rates to a hard landing in 2009. In the Middle East, wages appear to have dropped since 2008, although the data is still incomplete.

Differences between the regions are particularly stark if one looks at wage growth from 2000 to 2011. Globally, wages grew by just under a quarter. In Asia, they almost doubled. In Eastern Europe and Central Asia, they nearly tripled, although following significant declines in the 1990s. And in the developed world, they increased by just about 5 per cent.

There are also considerable differences in wage levels across countries.

The report highlights recent findings that show wages have grown at a slower pace than labour productivity - the value of goods and services produced per person employed - over the past decades in a majority of countries for which data is available.

This trend has resulted in a change in the distribution of income, meaning that workers are benefitting less from the fruits of their work while the owners of capital are benefitting more.

“Where it exists, this trend is undesirable and needs to be reversed,” said Ryder. “On a social and political level its clearest interpretation is that workers and their families are not receiving the fair share they deserve.”

In developed economies, labour productivity has increased more than twice as much as wages since 1999.

Even in China - a country where wages roughly tripled over the last decade - the labour share went down as GDP increased at a faster rate than the total wage bill.

The report warns that policy-makers should be careful not to promote “a race to the bottom” in labour shares in the hopes of gaining a competitive edge and exporting their way out of the recession. This is particularly relevant for deficit countries and the Eurozone.

All related info, the report itself and the executive summary can be found on www.ilo.org/wage12. 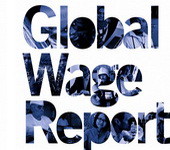