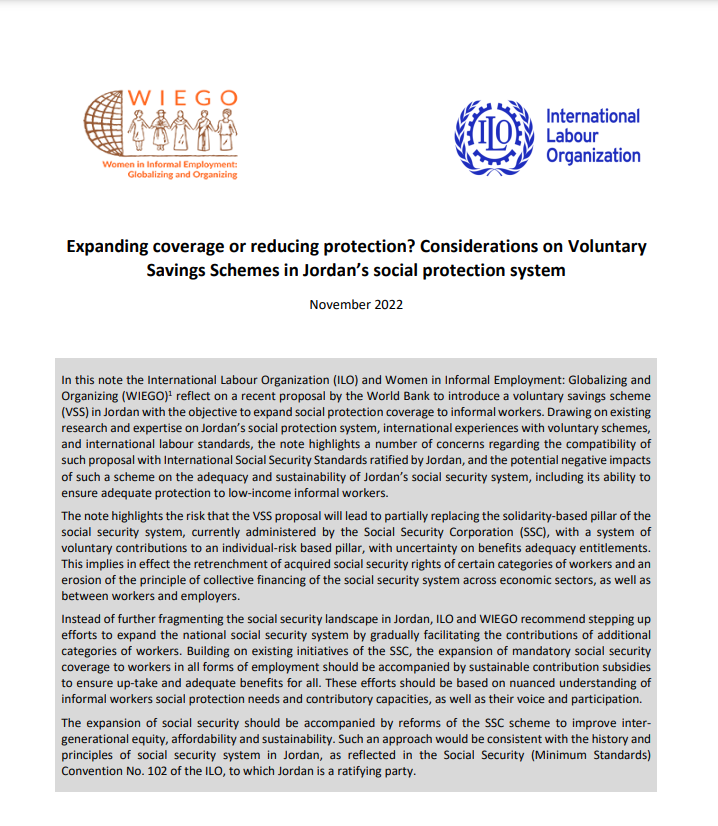 Download:
Drawing on existing research and expertise on Jordan’s social protection system, international experiences with voluntary schemes, and international labour standards, the note highlights a number of concerns regarding the compatibility of such proposal with International Social Security Standards ratified by Jordan, and the potential negative impacts of such a scheme on the adequacy and sustainability of Jordan’s social security system, including its ability to ensure adequate protection to low-income informal workers.

The note highlights the risk that the VSS proposal will lead to partially replacing the solidarity-based pillar of the social security system, currently administered by the Social Security Corporation (SSC), with a system of voluntary contributions to an individual-risk based pillar, with uncertainty on benefits adequacy entitlements.

This implies in effect the retrenchment of acquired social security rights of certain categories of workers and an erosion of the principle of collective financing of the social security system across economic sectors, as well as between workers and employers.

Instead of further fragmenting the social security landscape in Jordan, ILO and WIEGO recommend stepping up efforts to expand the national social security system by gradually facilitating the contributions of additional categories of workers. Building on existing initiatives of the SSC, the expansion of mandatory social security coverage to workers in all forms of employment should be accompanied by sustainable contribution subsidies to ensure up-take and adequate benefits for all. These efforts should be based on nuanced understanding of informal workers social protection needs and contributory capacities, as well as their voice and participation.