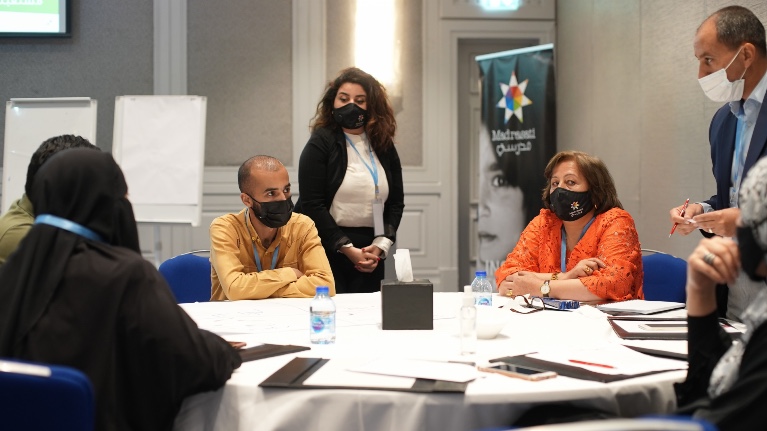 Amman, Jordan (ILO News) The International Labour Organization, together with Madrasati Initiative and the Ministry of Education held an event in Amman on Saturday (May 29) marking the successful completion of joint activities, aimed at strengthening career guidance services for 3,000 students, including vulnerable Jordanians, Syrian refugees and students of other nationalities in public schools – half of whom are females.

Madrasati, ‘my school’ in Arabic is Her Majesty’s Queen Rania Al-Abdullah initiative that aims to improve the physical and educational environment of Jordan’s most vulnerable public schools.

The career guidance activities were implemented as part of the ILO’s efforts under the PROSPECTS programme which is a global strategic partnership between the ILO, UNHCR, UNICEF, IFC, and the World Bank, and spearheaded by the Government of the Netherlands, to address education, employment and protection in the context of forced displacement.

“Our work with Madrasati under the PROSPECTS programme represents one of the greatest services we can provide for our youth – lighting a spark in their mind, stirring their curiosity about the world of work, and helping them become what they are meant to be,” said Frida Khan ILO Country Coordinator in Jordan and Senior Gender and Non-Discrimination Specialist for the ILO in the Arab States.

The initiative helped establish and equip career guidance centres at ten participating schools, including two schools in the Zaatari refugee camp to serve as a safe space for youth to receive individual and in-group career guidance services.

The event in Amman was an opportunity to acknowledge the achievements of the thirty-two school career counsellors and teachers who were trained to support the implementation of the programme.

“Today, we celebrate the accomplishment of our teachers and counsellors who supported our children in rediscovering their potentials and aspire to pursue their dream jobs,” said Tala Sweis, Director of the Madrasati Initiative.

Director of Education Management at the Ministry of Education Sami Mahasis thanked the ILO and Madrasati Initiative for the implementation of the programme and stated that the ministry hopes for the continuation of support and training for education counsellors so they can provide career guidance to students within the response to the COVID-19 crisis, through continuous efforts between the Ministry of Education and the organizations which support career guidance and employment.

In response to the COVID-19 pandemic which resulted in the closure of schools across the Kingdom, Madrasati Initiative developed an interactive home-based career guidance toolkits for students, helping them explore their interests, aspirations, and strengths and facilitate their decisions in terms of educational and professional pathways.

In addition, online workshops were held for teachers and counsellors, as well as parents to help promote career guidance among youth. The sessions were held in cooperation with the counselling department at the Ministry of Education, and tackled several career guidance topics such as supporting youth in making their educational and career choices, current labour market needs, as well as the effect of COVID-19 on students’ academic performance. During each session, parents were given the chance to engage and enrich the discussion with their experience and feedback.

“I used to think that my support for my son lies in guiding him only in choosing his academic path (scientific or literary). I found that the future jobs are different from the ones we used to seek and a large part of them will either disappear or change due to several factors, including the development of technology. As parents, we must guide our children to what suits their time and equip them with the skills they will need to build their future," said Wael Haidar, one of the parents from Saeed bin Al Musayyab School, in Zarqa.

An awareness raising campaign will be launched to reach more beneficiaries. This will include the production of a series of videos to raise awareness among students, teachers, parents, and the general public on career options in various sectors and professions, such as green jobs, digital marketing, renewable energy, and manufacturing.

The work achieved under the current initiative will feed into a wider inter-agency coordination with UNICEF and PROSPECTS partners, to support youth transitions into decent work.