Dead Sea, Jordan (ILO News) The ILO in Jordan is holding a five-day Training of Trainers (TOT) workshop using Think.Coop and Start.Coop tools developed by the ILO, which aim to promote cooperative development. The training, which began on Sunday (June 23), is part of efforts to strengthen the role of cooperatives in Jordan to further improve livelihoods and advance decent work for Jordanian workers and Syrian refugees in the country’s agricultural sector.

"We thank the ILO for all its efforts in advancing decent work and supporting partners in their work to enhance employment in Jordan," said Shdeifat in his opening remarks. "This also includes efforts in supporting cooperatives through workshops and other activities which seek to strengthen their role in the country."

The TOT workshop will enable JCC participants to acquire the skills required to train people willing to create and establish cooperatives or to improve the management and governance of their existing cooperatives. It is expected that by the end of the training, participants will develop an action plan on future training they will be organising.

During the week-long training, participants will familiarise themselves with the tools’ objectives and learning methodologies, as well as the role of facilitators and facilitation techniques. The training will focus on a number of areas, including the advantages of collective action, choosing a business structure, defining a business idea, researching potential members, as well as assessing the technical and financial feasibility of a business idea.

The training is part of a series of activities being implemented in Jordan that seek to strengthen the management and governance of agricultural cooperatives to ensure their sustainability. They fall within the framework of a project, funded by the Government of the Netherland, which seeks to advance decent work and the status of agriculture workers – Jordanian, refugee and migrant workers - through a compliance model that strengthens productivity, national labour legislation and adheres to international labour standards.

“The ILO has been working closely with agricultural cooperatives since 2017 to enhance their role in supporting refugees with work permits issuance as well as raising awareness among all workers on their rights and responsibilities in the sector,” said Maha Kattaa, Regional Resilience and Crisis Response Specialist at the ILO. “As part of our work to help further develop and strengthen the role of cooperatives in the agricultural sector, we are organising this training of facilitators on cooperatives development, using ILO tools in order to build the capacities of JCC by equipping them with adequate learning methods, techniques and approaches to transfer their knowledge to those who want to establish cooperatives or improve existing ones.”

Under the project, the ILO will also support JCC on the development of a national strategy for the cooperative movement in efforts to strengthen and promote cooperatives in different economic sectors in Jordan. Other interventions include raising awareness on key elements of decent work among agricultural cooperatives, with an initial focus on the elimination of child labour and occupational safety and health (OSH).

Agricultural cooperatives in Jordan have played an important intermediary role to facilitate Syrian workers’ access to flexible work permits and support members of their host communities. This came as a result of the Ministry of Labour, in close consultation and support of the ILO, introducing a new model that de-links work permit applications from specific employers in the agricultural sector, and allowing agricultural cooperatives to apply for Syrian refugee work permits.

As a result, agricultural cooperatives have taken on new roles and responsibilities including raising awareness among communities on issues related to legislative policies and procedures, safety and health measures and career guidance. Cooperatives have also been working closely with the Government, the ILO and other donors in facilitating income generating activities for Jordanians and Syrian refugees in the agricultural sector, initiatives which include joint ventures, greenhouse farming and cash for work programmes. 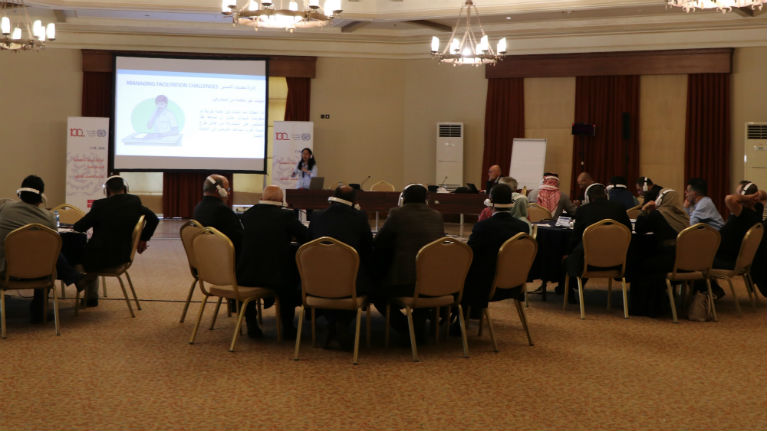