BEIRUT/BRUSSELS (ILO News) - The ongoing Syrian refugee crisis has highlighted just how important adequate employment opportunities are in both responding to the immediate humanitarian needs of the affected populations, and in progressing towards longer-term development and social stability, said ILO Regional Director for the Arab States Ruba Jaradat.

“The more vulnerable members of both refugee and host communities, particularly in Jordan and Lebanon, have been exposed to increased competition for already scarce jobs, and increased social tensions,” Jaradat said, speaking on a panel at the Brussels II Conference on Supporting the Future of Syria and the Region.

With the Syria crisis in its eighth year, the steady rise in the number of refugees has exacerbated many of the pre-existing labour market challenges in the host countries neighbouring Syria, including high youth unemployment rates, low labour force participation rates for women, informality, and low growth in labour productivity.

The ILO approaches job creation across two levels, responding to the immediate needs of affected communities, whilst also pursuing longer-term policies for improving labour market governance. It also works to provide an enabling environment for improved private-sector productivity, which in turn can generate decent work opportunities and longer-term social development.

“The ILO is committed to generating immediate solutions to labour market challenges stemming from the refugee crisis, whilst forging longer-term resilience, peace and social prosperity, as enshrined in ILO’s Recommendation 205 on Employment and Decent Work for Peace and Resilience,” Jaradat continued at the conference that brings together donors, governments and organizations to garner support for both Syrians and refugee-hosting communities and countries.

The ILO has been working hand-in-hand with host countries and development partners to support efforts to increase economic opportunities and employment creation in the region – for both refugees and host communities – through promoting an employment-rich national response, embedded in the principles of decent work.

Creating decent jobs is now at the heart of efforts by the international community’s response to the Syrian crisis. The ILO has been internationally and locally advocating not only for creating more jobs for those affected by the crisis, but increasingly for improving the quality of these jobs.

“It is key to focus not only the quantity, but also the quality of jobs created. It is not just jobs but decent jobs that make all the difference in the lives of Syrian refugees and the communities hosting them,” she stressed.

“This is founded upon our tried and tested knowledge that a decent work environment today paves the way to more stable, inclusive economic growth and sustainable development,” Jaradat said.

Jaradat concluded: “Decent work isn’t just a value to be promoted in times of peace and plenty. It is a pragmatic approach to building resilient, productive labour forces that are adaptive to shifting labour market needs, and central to stable economies and peaceful societies.”

In supporting the immediate creation of decent jobs for host communities and Syrian refugees to ease current conditions, the ILO’s Employment Intensive Investment Programmes (EIIP) in Jordan and Lebanon, for example, have enhanced economic opportunities for refugees and host communities. They are primarily funded by the German Government (BMZ) through the KfW Development Bank.

In Jordan, EIIP has so far created 5,300 jobs, 13 per cent of which benefited women. They have also boosted Syrian refugee beneficiaries’ incomes by 297 per cent, and incomes of Jordanian beneficiaries by 115 per cent. EIIPs also contribute to the creation, maintenance and rehabilitation of public infrastructure, which has been put under pressure due to the influx of refugees.

ILO advocacy, for example, paved the way to issuing over half of the 95,000 permits issued to Syrian refugees in Jordan since February 2016. ILO social partner the General Federation of Jordanian Trade Unions signed a Memorandum of Understanding to facilitate the release of over 10,000 construction sector work permits until March 2018, whilst 22 ILO-supported agricultural cooperatives delivered permits to agricultural sector workers.

Alongside this dual approach, the ILO also supports an enabling environment for improved private sector productivity, in order to generate decent work opportunities and longer-term social development. Since September last year, in one example, the ILO established 11 employment service centres across Jordan – including two new centres inside the Zaatari and Azraq camps. Providing market-relevant support, advice, and targeted training through these centres has already helped around 1,500 Syrian refugees and Jordanians – 40 per cent of whom are women – to find jobs.

Increased private sector productivity can empower local businesses to play a greater role in stimulating growth and creating jobs – both in the short and long terms. In Jordan, 677 firms were supported through technical advice and direct services to improve the likelihood of their export to Europe and recruitment of Syrian refugees. Thirty thriving joint businesses between Jordanian and Syrian refugees have been successfully established. 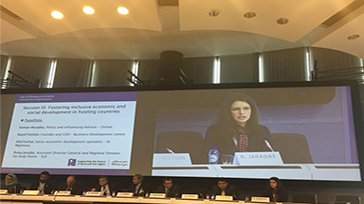