BEIRUT (ILO News) – The ILO Regional Office for Arab States, in partnership with Lebanon’s Ministry of Labour and Ministry of Social Affairs, and the United Nations Development Programme (UNDP), launched the country’s first Employment Intensive Infrastructure Programme (EIIP). The programme is funded by the German Federal Ministry for Economic Cooperation and Development (BMZ) through the German Development Bank (KfW).

Following the influx of hundreds of thousands of refugees from Syria, the ILO responded to the crisis by promoting decent work opportunities for both refugees and members of the local communities that host them.

The EIIP programme works to improve the access of Lebanese and of Syrian refugees to decent employment, improve infrastructure and public assets in Lebanon, and enhance the capacity of contractors and government institutions to plan and implement EIIP programmes. The programme also supports the Ministry of Labour in administering work permits to Syrian refugees in a speedy and transparent manner, so that the refugees can legally and formally take up short-term employment.

“The Programme takes on added importance given that it is implemented in Lebanon, a country which hosts an estimated 1.5 million Syrian refugees, who now account for some 25 per cent of the population,” said ILO Regional Director for Arab States Ruba Jaradat at the launch event. “This has placed a heavy burden on Lebanon’s economy, society, infrastructure and public services. Lebanon requires more such programmes, and further support from international donors, because it cannot – and indeed should not – shoulder this burden alone.”

With a total budget of 11.9 million euros for the first phase of the project, the ILO and its partners have begun implementing multiple infrastructure projects across Lebanon. Projects include construction of agricultural roads, water reservoirs and pavements.

“I see this approach as a win-win situation,” UN Resident Coordinator and Humanitarian Coordinator Mr. Philippe Lazzarini. “It invests in key infrastructure resulting in better services and at the same time provides much needed employment opportunities for the poorer and more vulnerable groups.”

The current phase of the programme is set to generate almost 96,000 workdays for some 2,400 individuals, at least 10 per cent of whom are women. The Programme will be implemented over three phases.

“Job opportunities and support for host communities were top of the agenda at the Brussels conference last year as prerequisites for stabilizing the region and creating new chances especially for young people,” said Germany’s Ambassador to Lebanon Martin Huth. “Therefore I am very happy that today - just before the next Brussels conference - we can launch this new project as a tangible and visible example of the German commitment to support the stability and prosperity of Lebanon.”

The EIIP emphasises the importance of capacity building, and over 200 professionals from the public and private sector participated in training workshops on planning and implementing employment intensive work methods and principles of Decent Work.

The project falls under the livelihoods segment of the Government-led Lebanon Crisis Response Plan 2017-2020 and is aligned with the United Nations Strategic Framework for Lebanon 2017-2020.

“The Government has succeeded, despite the many obstacles in its path, in developing an economic recovery plan for Lebanon which will reap real benefits on many levels,” said Minister of Labour Mohammad Kabbara. “This programme that we are launching today is in well in line with this plan.”

“Our joint goal is to provide jobs and to develop our country,” said Minister of Social Affairs Pierre Abi Assi. “We must achieve these goals through transparency and the highest level of dedication.”

The launch event concluded with the signing of the Programme Framework Agreement. 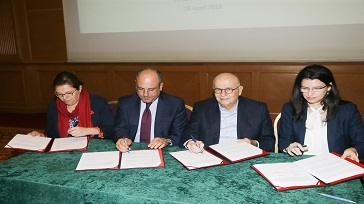