“It is evident that our region, amidst protracted social and political unrest, and the continuing conflicts in some countries, is subject to ever more critical labour market and employment challenges,” said Jaradat, speaking during the conference’s opening session.

Jaradat noted that total unemployment in the Arab region remained high at 10.2 per cent in 2017 (almost double the global rate of 5.6 per cent), with more than 13 million individuals looking for a job. Youth are particularly disadvantaged with a 27.6 per cent unemployment rate among those aged 15-24, compared to a global average of 13 per cent.

Gender inequalities are also acute, with the female unemployment rate standing at 18.7 per cent, more than double the rate of males (8.2 per cent) and three times their unemployment rate globally. Vulnerable employment has also increased by 32 per cent in the Arab region between 2000 and 2017, constituting 26.5 per cent of total employment in 2017.

“High shares of public sector employment remain a problematic characteristic of the region’s labour markets, particularly amidst the recent oil price crisis. The share of employment in the public sector ranges from 14 per cent to an estimated 80 per cent, excluding expatriate workers,” Jaradat told delegates from 21 Arab states at the conference.

“Future employment growth in the region must come from unleashing the job-creating potential of the private sector. This, together with the expected growth in population over the next decade, and the expected impact of globalization, technology and other drivers of change, will indeed necessitate better, more inclusive policy development to promote structural transformation, job-rich growth and decent work for all,” she said.

On the sidelines of the conference, Jaradat met with League of Arab States Secretary-General Ahmed Aboul Gheit, Arab Labour Organization Director-General Fayez al-Muteiri, and with ministers of labour from Saudi Arabia, United Arab Emirates, Kuwait, Yemen, Iraq and the Occupied Palestinian Territory, as well as with regional worker and employer representatives from the region. She was accompanied by senior ILO specialists from the Arab States region.

This year, the annual event takes place under the auspices of Egypt’s President Abdel Fattah El-Sisi from 8-15 April. It brings together delegates from 21 member states to discuss labour issues and policy responses.

Key panel sessions in this year’s event focus on the ALO Director General’s report on “The dynamics of Arab labour markets: transitions and ways forward,” as well as on two technical reports on “The corporate social responsibility of private sector institutions” and “The role of productivity in promoting competitiveness and growth.”

Jaradat said the ILO noted, with great appreciation, the many advancements Arab countries have made in the world of work over the past year. In particular, she noted Iraq’s ratification of Convention No. 87 on Freedom of Association and Protection of the Right to Organise, and Lebanon’s imminent ratification of Convention No. 144 on Tripartite Consultation (International Labour Standards) – as well as a number of important labour policy reforms across the region.

She added that the ILO Regional Office for Arab States (which covers countries in the Gulf and Levant) has also been hard at work over the past year to provide technical and advisory support to governments, workers and employers in the region.

Of the many examples she cited, Jaradat noted that through the Employment Intensive Infrastructure Programmes (EIIP) in Jordan and Lebanon, the ILO is facilitating the creation of employment opportunities for refugees and host communities. In Jordan alone, over 4,600 jobs were created. Out of all the workers employed, 13 per cent were women and 2 per cent were persons living with disabilities. The programme has seen the rehabilitation of 660 km of roads, and the maintenance of 8 km of terracing and 152 hectares of forestry areas, as well as environmental cleaning and improvement activities.

Jaradat also noted that the ILO is set to embark on projects with Syria and Yemen to fight the worst forms of child labour, including child involvement in armed conflict.

The ILO and ALO have a long history of cooperation in the Arab region, dating back over four decades, and the two agencies signed a Memorandum of Understanding in 2007. 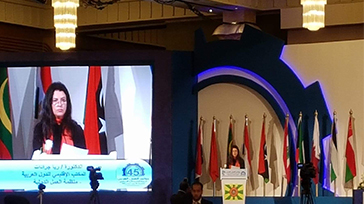