BEIRUT (ILO News) - The International Labour Organization (ILO), Lebanon’s Ministry of Labour (MOL) and the Norwegian Embassy in Lebanon inaugurated an ILO-supported centre that will help street-based child labourers in the Ouzai suburb of the capital Beirut.

The centre, to be operated by the Lebanese NGO Beyond Association, is technically and financially supported by an ILO project funded by the Norwegian government.

The centre will provide a variety of practical support services to local and refugee child labourers involved in street work. Such work includes begging, street-based trade and services, and forms of illicit activities.

Regionally, the already vast number of children engaged in the worst forms of child labour increased substantially following the outbreak of the crisis in Syria in 2011, and the arrival of refugees – many of them children – in neighbouring countries.

The ILO warns that the growing exploitation of these working children is of serious concern in the region.

“Contrary to global trends, child labour has increased in Lebanon as well as in other neighbouring countries, largely fuelled by the influx of refugees desperate for income,” said Frank Hagemann, the ILO’s Deputy Regional Director for Arab States and a child labour specialist.

“Street-based working children are particularly vulnerable as they are subjected to hazardous working conditions and harassment, and can be lured into dangerous illicit activities,” he said.

The centre will provide educational, counselling and other services to child labourers, as well as to children withdrawn from child labour and those at risk of entering child labour. Ouzai is one of the most disadvantaged of Beirut’s suburbs, and is host to large numbers of refugees.

The ILO project responsible for the centre will also provide economic support to the children’s families where possible, to help address the factors that push families to send their children to work.

The project has provided specialized capacity building support for the centre’s social workers and educators, and has trained the Internal Security Forces in the Ouzai and wider Mount Lebanon area on how to attend to child labourers and withdraw them from street work.

The ILO has supported the government of Lebanon in combatting child labour in recent years through practical interventions and policy analysis, including the development of the National Action Plan to Eliminate the Worst Forms of Child Labour.

“The National Action Plan prioritizes three main sectors for intervention, and one of them is street-based child labour,” said Nazha Challita, Head of the Ministry of Labour’s Child Labour Unit.

“In this regard, it is crucial to provide direct services to the child, services such as those offered in this centre,” she said.

“Child labour is prohibited everywhere in the world. My government’s commitment is to ensure that all children have opportunities to build a future for themselves,” Lind said.

“We work with and through good partners to achieve this and we succeed when you succeed. The Ouzai center provides the kind of direct services that are needed for victims of child labour and abuse. I am impressed by the good work done by Beyond Association in cooperation with ILO Lebanon and the Ministry of Labour,” she added.

The centre will provide the children it cares for with services such as literacy and numeracy programmes, psycho-social support, awareness raising on the hazards of child labour through drama and the arts, recreational activities and child protection activities.

“We are also working hard to refer as many of these children as possible to the state schooling system, by means of the Child Labour Monitoring System,” said Joe Awad of Beyond Association.

The system is an ILO tool that provides children who have been withdrawn from child labour with access to governmental and non-governmental services, and closely monitors them so that they do not return to the streets. The system has been adopted by Lebanon’s Ministry of Labour.

Beirut has one of the highest densities of street-based child labourers in Lebanon, according to a 2015 national study carried out by the ILO, UNICEF and Save the Children International, under the umbrella of the Ministry of Labour’s Child Labour Unit.

In 2016, Beyond Association opened a similar centre with the support of the ILO, MOL and Lions of Norway for child labourers in the agricultural sector in Lebanon’s Beqaa region. A third centre is due to open in Nabatiyeh in South Lebanon in October.

The ILO project responsible of the centres is titled “Combatting the Worst Forms of Child Labour among Syrian Refugees and Host Communities.” 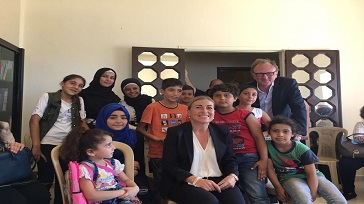