AMMAN, Jordan - The Ministry of Labour, the European Union and the International Labour Organization (ILO) signed a project agreement on April 26 to provide matching services for job seekers among Jordanians and Syrian refugees, connecting them with employers. Under the project, ILO will be facilitating the implementation of the relaxation of the rules of origin scheme agreed by the EU to help Jordan further access the EU market. Through this project, the ILO will be extending the core services of one of its flagship programmes, Better Work Jordan (BWJ), to further manufacturing sectors, aiming to help Jordanian companies abide by the country’s labour law and meet international labour standards.

The 1 million euro project will help Jordanians and Syrian refugees alike enter the local job market under decent working conditions, and will be carried out in collaboration with the MOL and national stakeholders. It will apply to new jobs created following the relaxation of the rules of origin for Jordanian companies to enhance their exports to the EU market. The project aims at supporting the implementation of the EU-Jordan Compact, including assisting Jordanian companies to take advantage of trade opportunities provided by the new trade facilitation, leading to job creation for both Jordanian and Syrian refugees.

Labour Ministry Secretary General Farouq Hadidi welcomed the agreement saying it demonstrated the EU and ILO’s involvement in developing the capabilities of Jordanians to export to the European market.

“A major objective for our government is to increase exports to the EU market, which would benefit the country’s economy, society and our guests, Syrian refugees,” Hadidi said. “We aim to make them part of our economic development and include them within our production facilities, because we believe that joint efforts from different countries to open channels for our exports to Europe will develop our economy and help Jordan provide a good life for the Syrian refugees living here.”

“We give our full support to this agreement, its implementation and the implementation of the new rules of origin, and we agreed with the ILO that we would be very happy to direct our efforts to attract more and more Syrian refugees to the job market, especially to the industrial sector,” he said.

European Union Ambassador to Jordan Andrea Matteo Fontana said: “The EU is assisting Jordan in making the best use of the simplified rules of origin arrangement." He added: "The formal launch of this new scheme will take place at next week's high-level event on the rules of origin in Brussels, kick-starting trade opportunities across Europe for Jordan.”

Also under the project agreement, Better Work Jordan – a partnership between the ILO and the International Finance Corporation (IFC), a member of the World Bank Group - will collaborate with the MOL to expand its core services of assessment, advisory and training so far limited to the garment industry, to further industrial exporting sectors included in the rules of origin agreement.

ILO Regional Director for Arab States Ruba Jaradat welcomed the agreement and expressed her enthusiasm for the achievement.

“This project will help manufacturing companies to recruit Jordanians and Syrian refugees, while ensuring that the jobs created, following the EU-Jordan trade agreement, will be decent jobs,” Jaradat said.

“Of course the success of the initiative will also depend on the number of European buyers that will procure goods from Jordan, and the capacity of Jordanian factories to comply with high European quality standards. The ILO will also work closely with the Government and social partners to boost the capacity of the factories for export and job creation,” Jaradat said.

Six years into Syria's war, neighbouring Jordan is currently hosting more than 650,000 Syrian refugees registered with the United Nations’ refugee agency (UNHCR), 80 per cent of whom live in host communities. The country’s recent census in 2015 showed some 1.3 million Syrians living in the Kingdom, roughly around half of them registered as refugees. So far, the government of Jordan, in collaboration with the ILO, has issued 48,000 work permits for Syrian refugees hailing mostly from formal positions in agriculture, manufacturing and services sectors.

During last February's Support to Syria and the Region Conference in London, the EU pledged to simplify the rules applied to manufactured goods produced in Jordan, so as to stimulate export opportunities and ultimately promote job creation in the Kingdom. The Simplified Rules of Origin Agreement between Jordan and the EU was concluded in July 2016. It is applicable to 52 product groups and is available to producers in 18 specified industrial areas.

One of the conditions for applying the relaxed rules of origin is for companies to employ 15 per cent of Syrian refugees, increasing to 25 per cent after the second year, which allows Jordan to export products to Europe tariff free for a ten-year time span. So far, six companies have already been certified for tariff free export to the EU Single Market under the new agreement, of which one has already exported goods to the EU.

Based on their longstanding track record, the ILO has been identified as the most suitable partner for the monitoring of labour aspects of the implementation of the rules of origin agreement. In recent years, the ILO has responded to the Syria refugee crisis in Jordan, partly through strengthening the knowledge base on the impact of the crisis on Jordan’s labour market, enhancing institutional capacity and coordination to combat unacceptable forms of work, as well as improving access to employment opportunities and livelihoods among refugees and in host communities.

The ILO’s Better Work Jordan programme, on the other hand, has aided the doubling of the garment industry’s total exports, reaching 1.6 USD billion in 2016 and significantly increasing the number of jobs since its establishment in 2008. 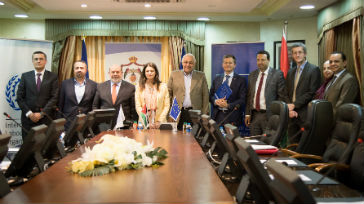