Amman, Jordan (ILO News) The number of child labourers in Jordan has roughly doubled to more than 69,000 since 2007, with around 44,000 engaged in hazardous work, according to the latest National Child Labour Survey released on Tuesday (August 16).

The ILO, which supported the implementation of the survey, said it was deeply concerned by the rise in the number of children aged between five and 17 that have been forced into work, often under potentially dangerous conditions.

The ILO said it hoped the data from the survey would be used by all stakeholders to combat the problem more effectively.

“We are concerned by the increase in child labour in Jordan,” said Insaf Nizam, Chief Technical Advisor for ILO’s “Moving towards a Child Labour Free Jordan” project. “But we also acknowledge that the efforts of all actors have yielded some positive results in keeping the percentage of child labour under control in spite of challenging socio-economic circumstances.”

A summary report presenting the main findings of the survey was unveiled in Amman at a meeting held under the patronage of His Excellency Ali Ghazawi, Minister of Labour.

The survey is the first of its kind to be conducted since 2007. It was implemented by the University of Jordan’s Centre for Strategic Studies in collaboration with the Ministry of Labour, the Department of Statistics, and with the ILO project titled “Moving towards a Child Labour Free Jordan,” which is funded by the US Department of Labor.

Its findings were based on a sample of over 20,000 households from across the country, designed to generate estimates disaggregated from all 12 governorates, including the Zaatari camp, the largest Syrian refugee camp in Jordan.

The survey, which measured only hazardous work within the Worst Forms of Child Labour, found that children are exposed to a number of hazards such as dust fumes, as well as exposure to physical and psychological abuse.

In recent years, Jordan has taken significant steps to strengthen its policy responses to child labour. In 2011, the Council of Ministers approved the National Framework to Combat Child Labour (NFCL), the implementation of which is being supported by the ILO. The NFCL is designed to integrate efforts to combat child labour by the Ministries of Labour, Education, and Social Development, in order to effectively tackle the identification and referral of child labour across Jordan.

“The survey shows that more emphasis is needed on implementing the policy frameworks in order to achieve a significant reduction of child labour in the Kingdom,” said the ILO’s Nizam.

The survey shows that Syrian refugee children have the lowest school attendance rate, and working Syrian children earn lower wages than Jordanian children, an indication that they are more vulnerable to exploitation.

It found that the worker-to-population ratio is highest among Syrian children at 3.22 per cent, followed by other nationalities at 1.98 per cent and Jordanians at 1.75 per cent.

“The high worker population ratio among Syrian children, and the fact that more than 60 percent of Syrian children between the ages of 15 and 17 are out of school, are indications that they are at a higher degree of vulnerability. This calls for more intensified and targeted efforts to address the issue,” said Nizam.

The survey puts the number of Syrian refugees in Jordan at 797,081. According to Government figures, however, the number is 1.3 million, while the number of officially registered refugees is 657,203. Their presence in host communities has impacted the economy and the labour market, including increasing the number of child labourers.

The survey in numbers:

A summary report of main findings is now available online. The full Jordan National Child Labor Survey Report 2016, including a more detailed presentation of findings and estimates from the survey, the technical details and the questionnaire, will be disseminated in September 2016 by the Centre for Strategic Studies, University of Jordan, and the ILO. For further information please contact Salwa Kanaana at kanaana@ilo.org 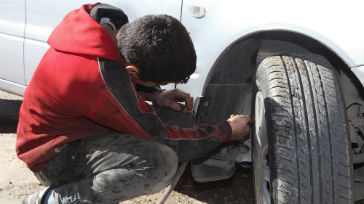