Amman, Jordan (ILO News) On behalf of the German Federal Ministry for Economic Cooperation and Development, the German Development Bank (KfW) is providing the ILO with a first tranche of 10 million euros to fund a two-and-a-half-year project that will work at improving the lives of thousands of Syrian refugees and Jordanians by creating jobs and upgrading infrastructure.

The funding is part of a pledge made by Germany during February’s London Donor Conference, which was held to support countries like Jordan deal with the influx of Syrian refugees.

The project will build on the ILO’s on-going efforts to ease some of the labour market pressures caused by the refugee crisis, through facilitating access to employment and livelihood opportunities.

“While the ILO will continue to link with its constituents to support the development of the Jordanian labour market, there is currently a need for immediate job creation, through the provision of employment intensive infrastructure programmes,” said Ruba Jaradat, ILO Regional Director for the Arab States.

“Germany’s generous contribution will help Jordan and the ILO respond to the urgent need to employ Jordanians and refugees, while improving infrastructure in some of the country's most impoverished areas,” Jaradat added.

The project will target the governorates of Irbid and Mafraq, two of the largest refugee-receiving districts in Jordan. Work will centre on improving roads as well as local agricultural infrastructure through the construction of water catchments and soil protection measures. Some overcrowded schools will also get additional classrooms built, while others will be renovated using labour-intensive methods. These initiatives will be implemented in collaboration with the Ministries of Agriculture, Public Works, Education and Labour.

Through the project, the ILO will continue advocating for the formalisation of Syrian refugee employment in Jordan through easing their access to work permits. This will include awareness-raising campaigns and working with the Ministry of Labour on enhancing the capacity of local Ministry of Labour authorities in the two districts.

“This new partnership between KfW and ILO is the first of its kind in Jordan, complementing our ongoing cooperation with the Jordanian authorities in the fields of water, education, energy and solid waste. It aims at quickly alleviating the situation in some of the host communities most affected by the Syrian refugee crisis,” said Florian Rabe, Director of the KfW office in Amman.

In 2013, the ILO launched a strategy aimed at supporting Syrian refugees and host communities in Jordan, Lebanon, Turkey, and Egypt. In Jordan, a revised framework after the London Donor Conference will focus on improved labour market governance; enhanced capacities of companies to grow and benefit from the Jordan Compact; and immediate job creation for Syrian refugees and Jordanians.

Most recently, ILO interventions included working with local communities on improving their agricultural produce, promoting local products through marketing events, and piloting Employment Intensive Investment Programmes in Irbid and Mafraq. Other efforts include assisting in the production and implementation of local economic development plans aimed at generating employment in various industries. The ILO is also implementing a project aimed at combating rising child labour among Syrian refugees and host communities through labour policy reform and technical capacity building. 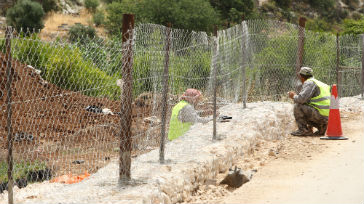