ILO News – The Government of Italy has become the first donor to fund the expansion of an ILO project which works on alleviating the critical effects of the Syrian refugee crisis in Lebanon through bolstering employment and livelihoods in the north of the country.

The new Italian Development Cooperation donation to the ILO – amounting to US$500,000 – is vital funding for the agency’s overall response to the effects of the refugee crisis in neighbouring countries, particularly in boosting livelihoods and combating child labour.

Nearly 1.15 million Syrian refugees were registered in Lebanon as of January 2015.

“At least one in every four people in Lebanon is now estimated to be a Syrian, a proportion unparalleled in the world. The conflict in Syria is having grave social and economic impacts on Lebanon,” said Frank Hagemann, Acting Regional Director of the ILO in the Arab States.

Compounding an already fragile economic, social and political situation, the influx has put considerable pressure on the Lebanese economy and the labour market at different levels in recent years.

“Livelihoods of both host communities and of refugees depend on strong international support – and the funding from the Italian government is a vital cornerstone of this support,” Hagemann said.

The Italian government pledged the funding in a ceremony at the Italian Embassy in Beirut on February 24, in which it also pledged funding for programmes by UNICEF and UNDP that respond to the refugee crisis in Lebanon.

“We truly hope to continue collaborating with UNICEF, UNDP and ILO and we are confident that this partnership may be a step towards further accomplishments in our joint commitment to promote peace, prosperity and progress in Lebanon,” said Italy’s Ambassador to Lebanon Mr Giuseppe Morabito.

The new funds will go towards bolstering employment services in order to improve access to employment opportunities and livelihoods for youth and other groups in North Lebanon made vulnerable by the refugee crisis.

They will also fund ILO work to increase jobs and other income generation opportunities in target agricultural sectors in the northern area of Akkar.

Critically, bolstering employment and livelihoods in North Lebanon will foster social cohesion to de-escalate tensions between refugees and host communities.

The project is the ILO contribution to the livelihoods sector of the Lebanon Crisis Response Plan (LCRP) 2015-16, agreed between the Government of Lebanon and international partners.

The LCRP is part of the broader Regional Refugee & Resilience Response – the “3RP” – a response to the Syrian refugee crisis in neighbouring countries jointly coordinated by a number of agencies such as the ILO, UNDP and UNICEF.

The ILO estimates that approximately 1,660 people are expected to benefit directly – and 50,000 indirectly – from the project upon its completion in 2017 pending additional funding.

The project uses an approach which changes the way market systems work so that they offer more opportunities and benefits to poor and vulnerable people. It implements this through a variety of means, including value chain interventions such as creating market linkages to boost exports, upgrading informal apprenticeships and on-the-job-training programmes. 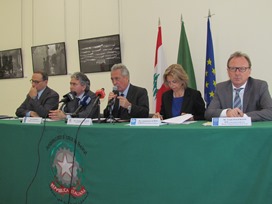