In many countries around the world, multiple forms of discrimination and other structural barriers prevent women from participating in the labour market on an equal footing with men, including low salaries, limited opportunities for reaching leadership positions and inadequate child care. In Jordan, women’s jobs and qualifications can also remain undervalued due to stereotypes and prejudices, social and cultural norms designating men as breadwinners and women as homemakers. The absence of effective legislation and regulations, a lack of familiarity with women’s rights, and women’s weak representation and bargaining power all contribute to undervaluing women’s contribution to the labour market. The problem is particularly prevalent in Jordanian private schools, where the gender pay gap reaches an average of 41.6 per cent. 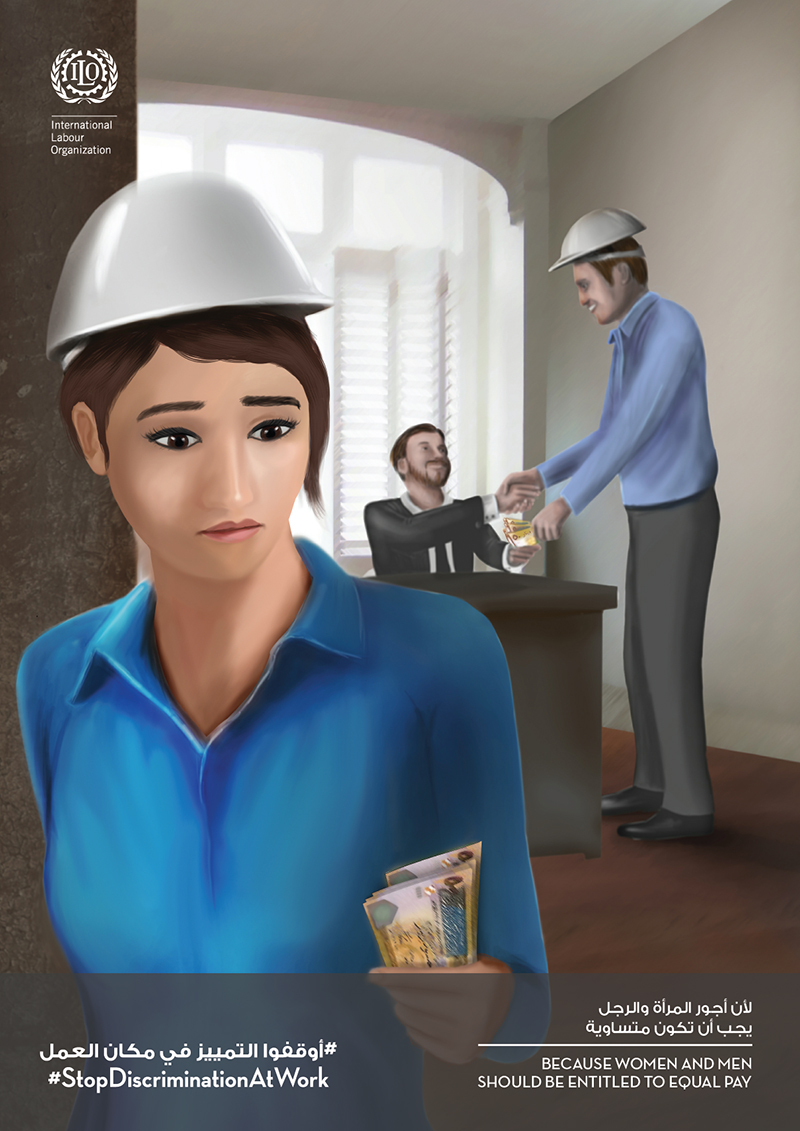 Nour works as an engineer in a construction company, where she says men employees earn twice as much as the women engineers in terms of basic salary. In addition, certain benefits, such as free phone use, transportation and health insurance for the family are available exclusively to men. When Nour approached her manager to discuss the matter, she was told that unmarried women did not need a higher salary or benefits. She believes that women engineers in the company should organize to end this discrimination. 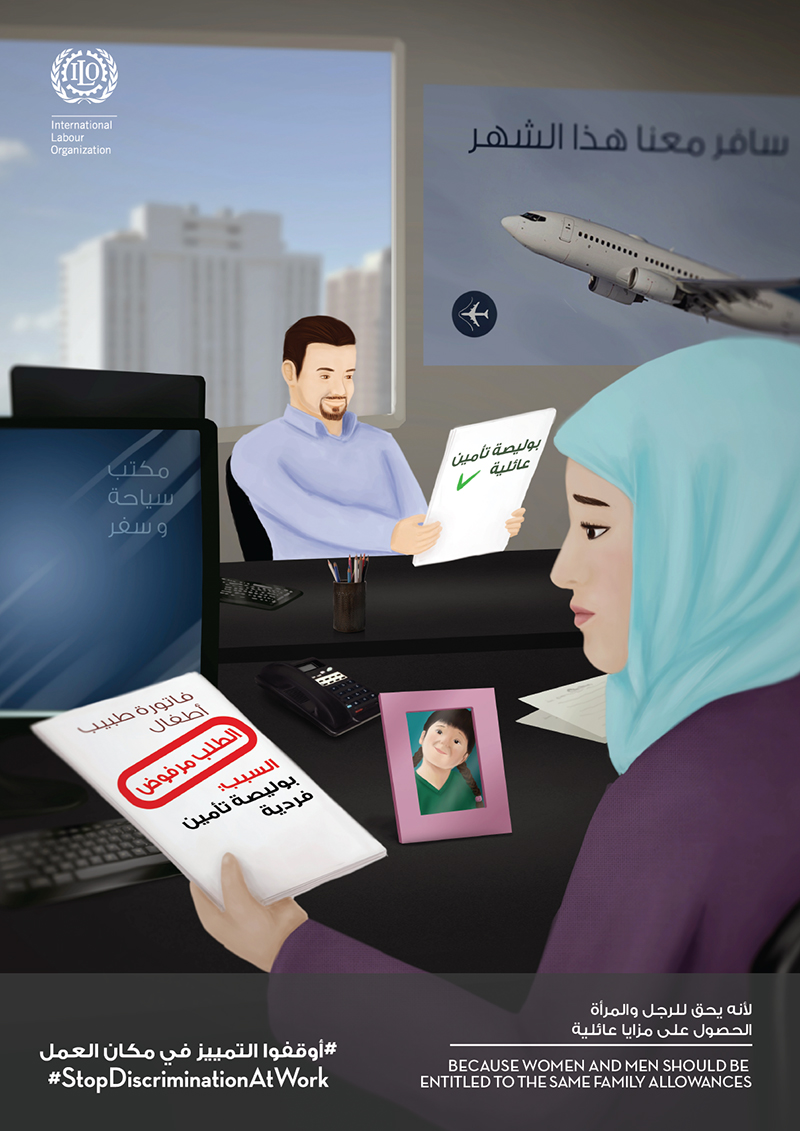 Sama works in a travel agency with 21 other employees. The company has set the monthly salary at 500 Jordanian dinars (about US$705) for both men and women. However, Sama says that only male employees are entitled to include their children under the company’s insurance policy. Sama thinks that there should be better legislation in place to end such discrimination and ensure gender equality in the workplace. 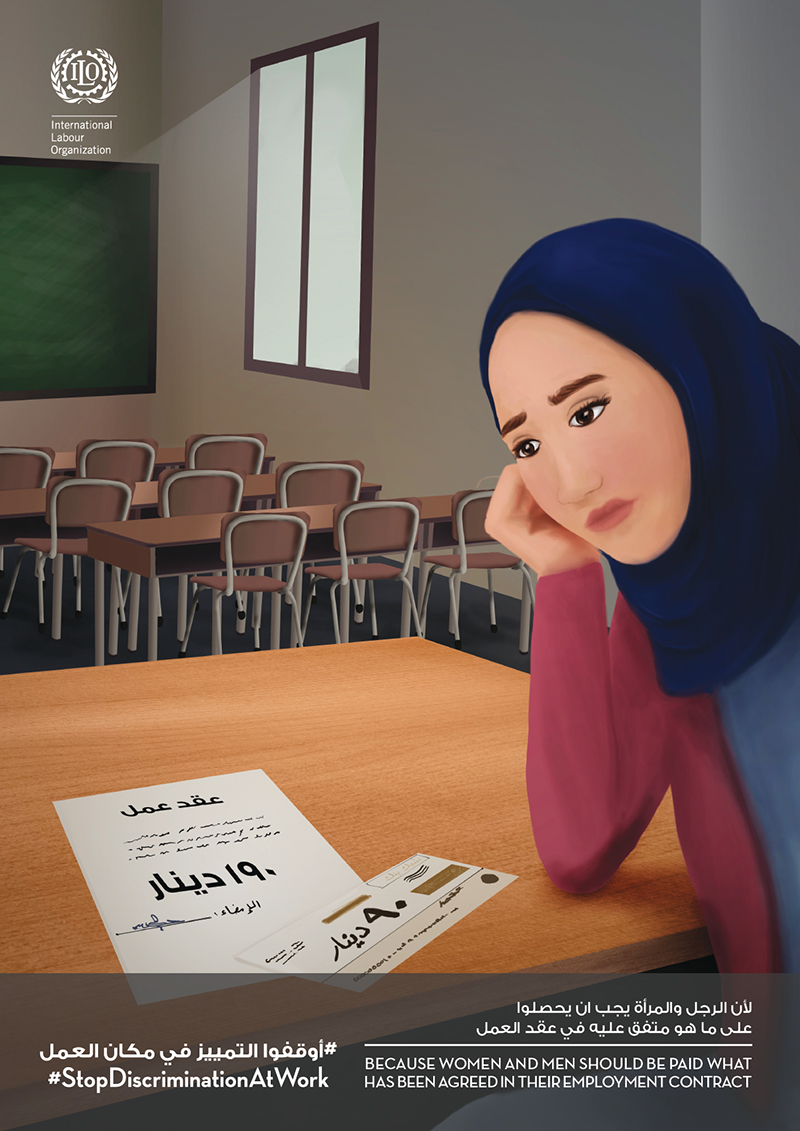 Farah worked as a teacher in a private school with 13 other colleagues, most of whom were women. Farah signed a contract with the school agreeing to a monthly salary of 190 Jordanian dinars (about US$268,) which is the national minimum wage. Despite the contractual agreement, the school management told Farah that during her first semester she would only be paid a monthly salary of 125 dinars (about US$176.) However, at the end of each month, Farah only received 90 dinars (about US$127,) and was also required to pay 24 dinars (about US$33) towards social security. Farah confronted the school’s management and as a result, she was dismissed from her job. Farah filed a case with the relevant authorities, but it is still pending. 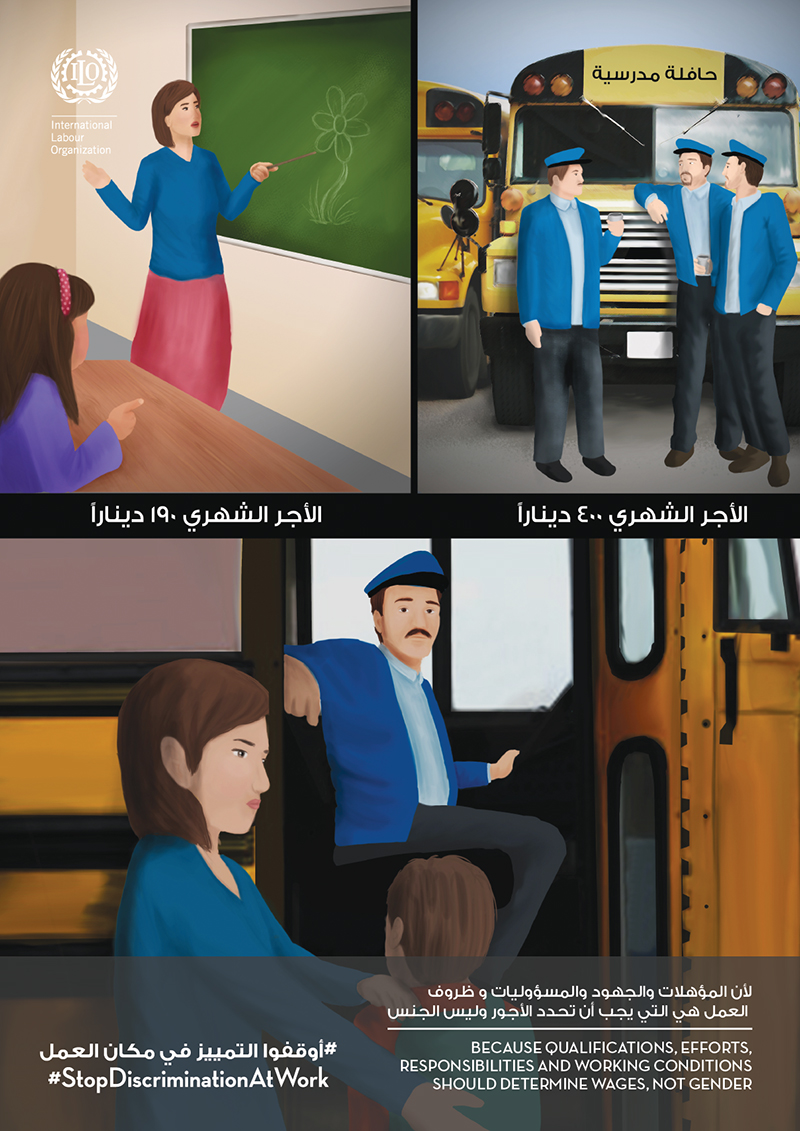 Alia is a physical education and arts teacher who is paid 190 Jordanian dinars (around US$268) per month. Alia says that the bus driver working for the same school earns a monthly salary of 400 dinars (about US$564.) Although it is not part of her job description, Alia is also expected to accompany the children on the bus to and from school every morning and afternoon outside her official working hours, without being compensated for the extra work. Alia thinks that qualifications, efforts and responsibilities should determine wages and responsibilities, not gender. 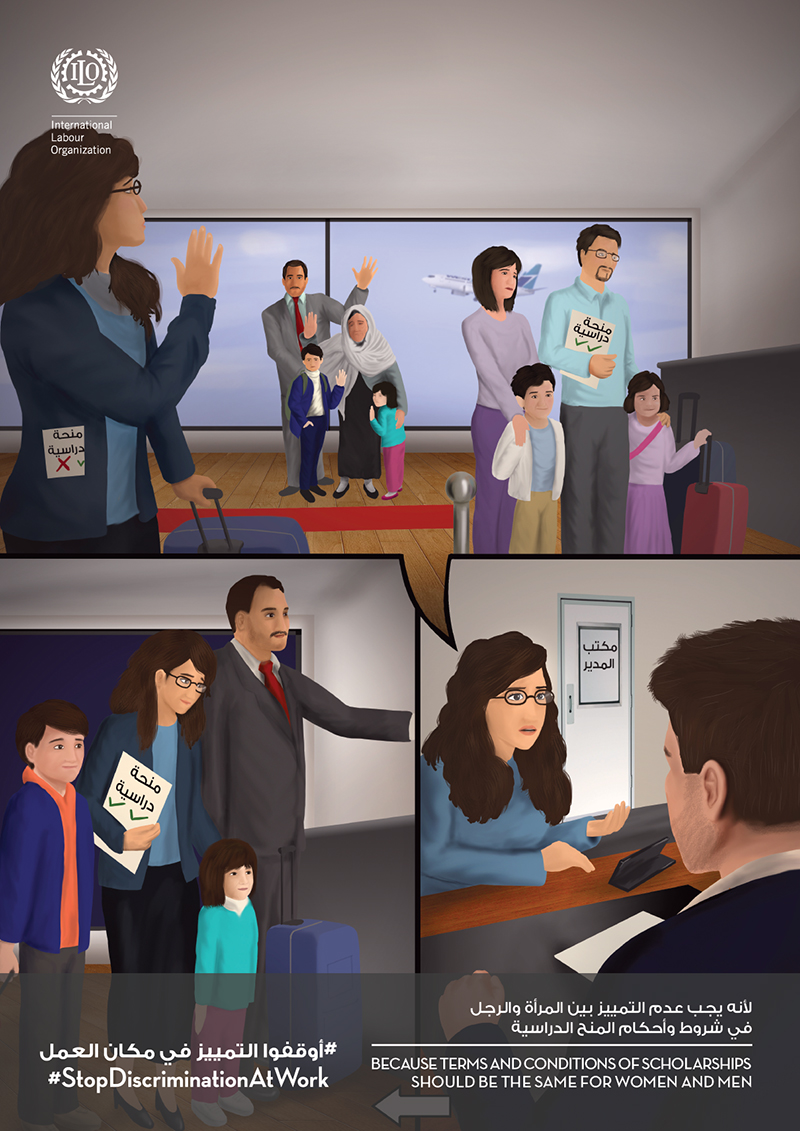 Yasmine is a professor at a university in Jordan. Yasmine and her colleagues were awarded a scholarship for further specialised studies at a university abroad. However, the Jordanian university provided additional financial support to the male professors, and allowed three family members to accompany them, while also covering their health insurance and travel expenses. Yasmine, on the other hand, received less financial support and was not allowed to take any family members with her. She contacted the president of the university repeatedly to discuss the matter. Her persistence paid off, resulting in many positive changes in the university’s practices including the introduction of identical scholarship terms for both women and men. 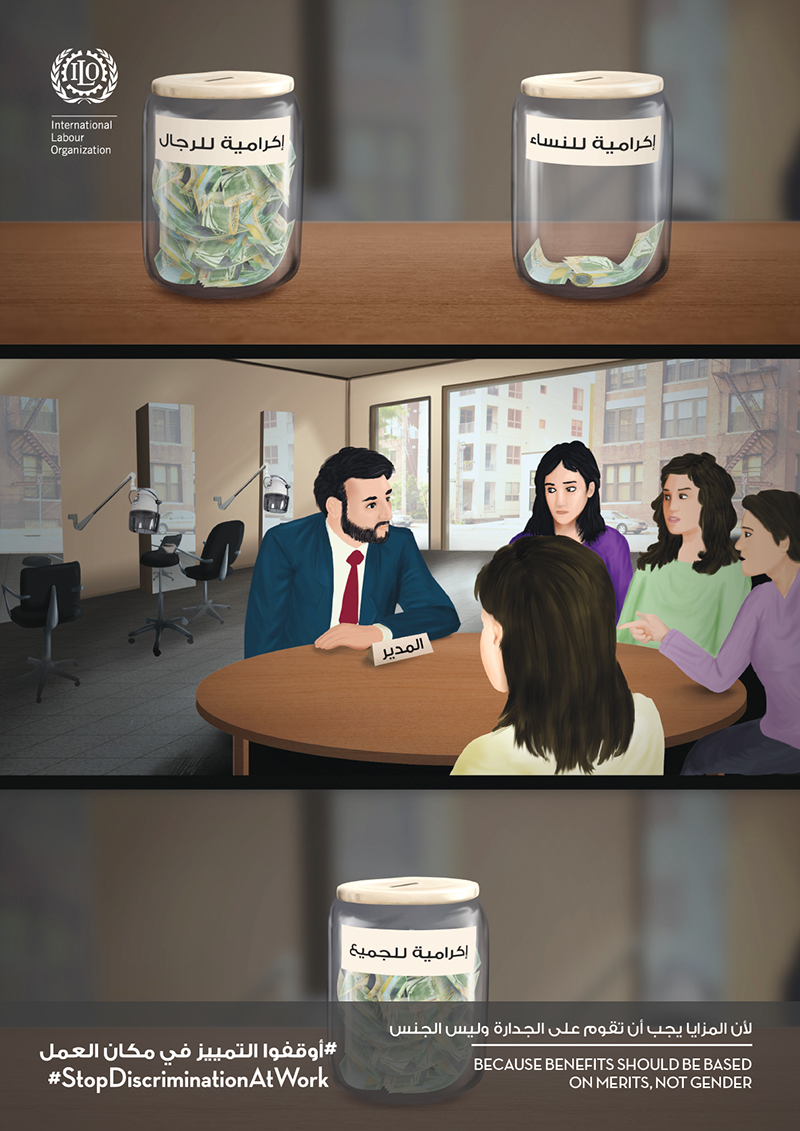 Amal is a hairdresser working in a hair salon for women. The salon has 10 employees who are paid according to their years of experience, regardless of their gender, starting from 200 Jordanian dinars (about US$282) per month. However, tips received by clients were not split equally. The men employees claimed 40-50 per cent more of the tips than the women. Female members of staff decided to raise the issue with their manager, demanding that tips be distributed equally. Their efforts paid off, and the manager decided that all tips should be distributed equally between all employees, irrespective of their gender. 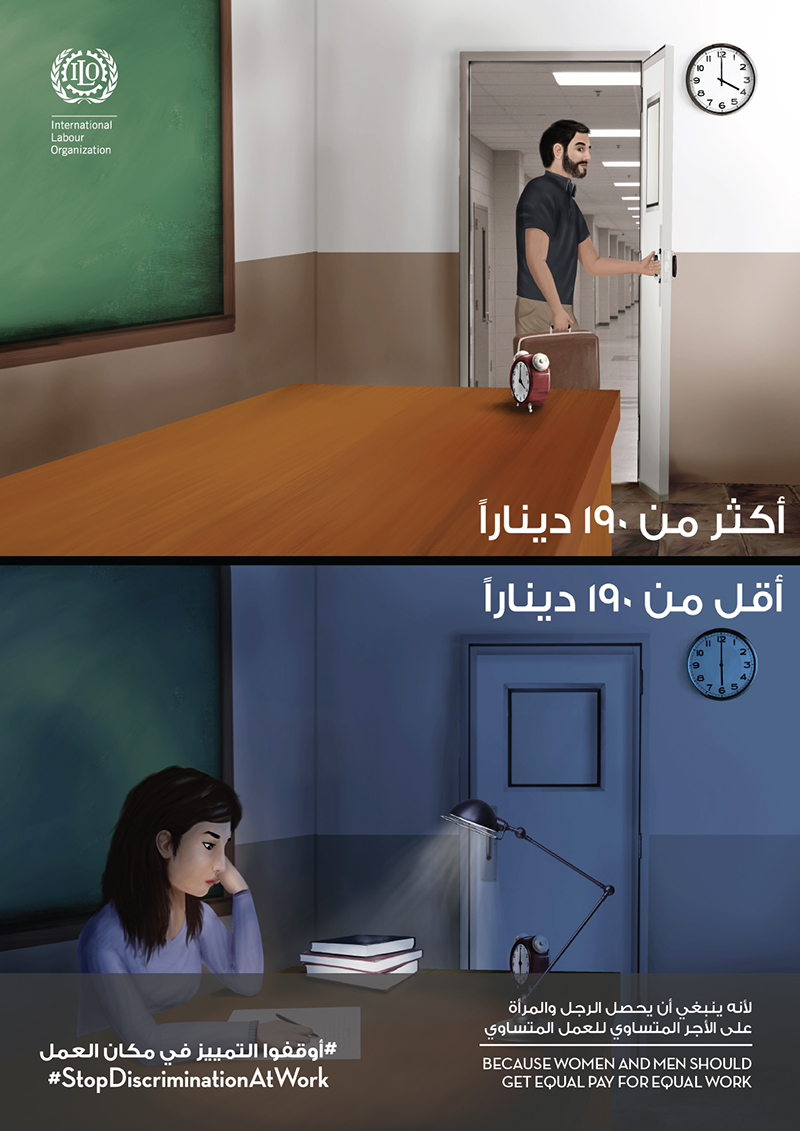 Rania worked as a teacher in the girls’ section of a private school with 85 other women employees. Rania agreed to teach for a monthly salary of 190 Jordanian dinars (around US$ 268) only to discover that one of her male colleagues was getting paid more than her, although he had the same level of experience and qualifications. She also discovered that women teachers who worked long hours got paid less than the male colleagues who worked fewer hours. After witnessing this on-going discrimination, Rania decided to quit her job in the school. She hopes that her story will help change such discriminatory practices, and that female teachers will be treated fairly in the future. 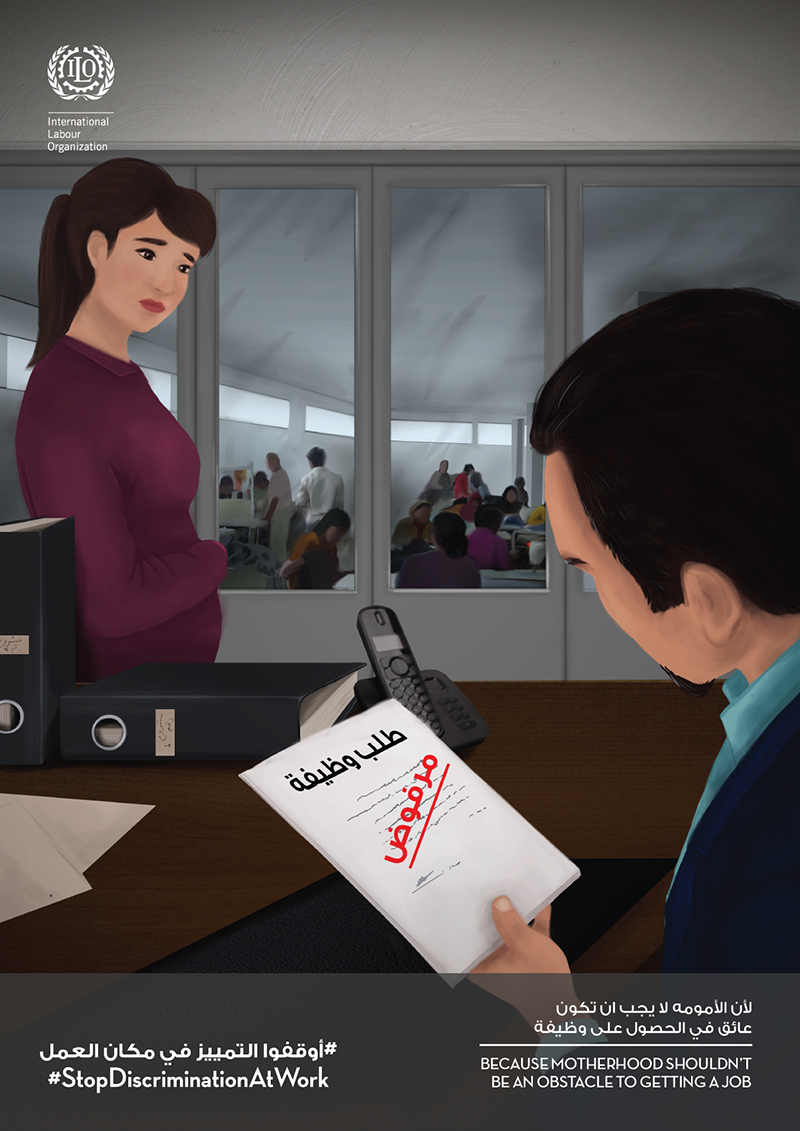 Nisreen is unemployed and is struggling to find a job. However, after her pregnancy started showing, potential employers rejected her applications. She believes that she was qualified for the jobs she applied for and that she was rejected because of her pregnancy. Similarly, in many garment factories in Jordan, where the work performed is not hazardous to pregnant women, migrant women who apply for jobs are required to undergo a pregnancy test. If the women are found to be pregnant they are not offered jobs. 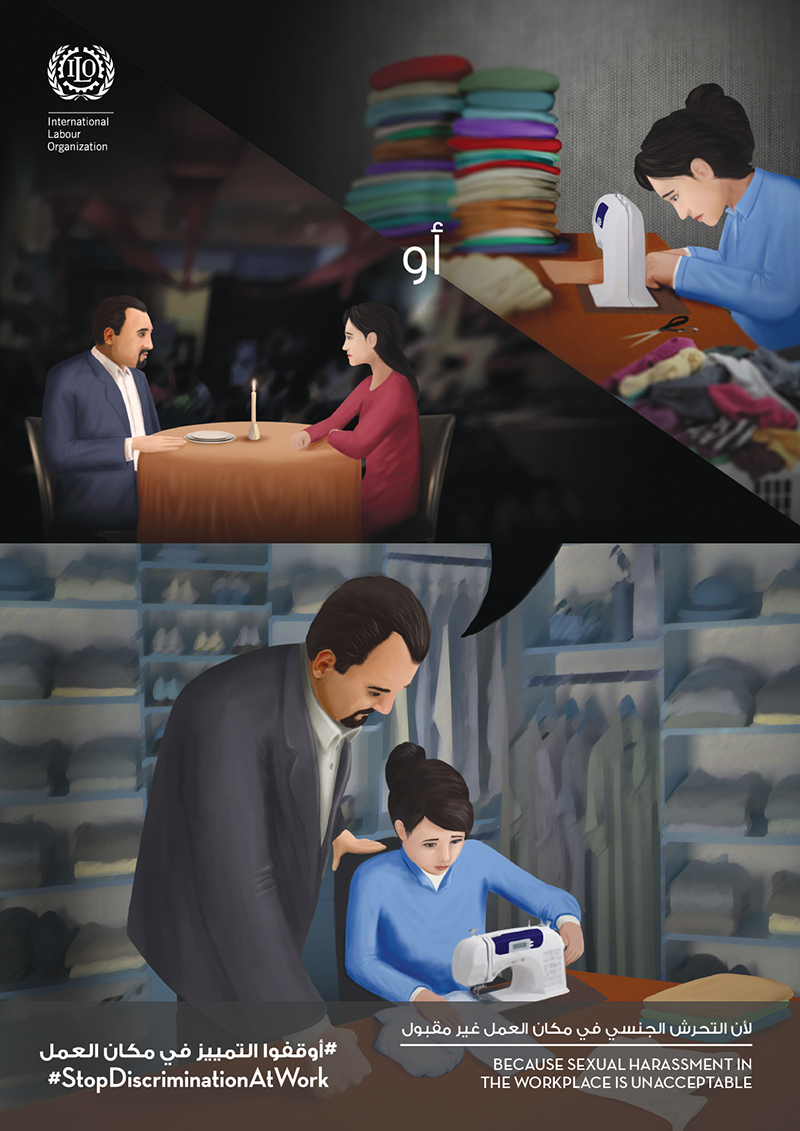 Leila works in a garments factory. Her male supervisor began to harass her at work. She asked him to stop, but he threatened to increase her work load if she refused to meet him outside work. Leila chose to leave her job as she was not aware that Jordan’s labour law protects her from sexual harassment and penalizes the harasser.

Stories of Discrimination in the Workplace in Jordan [pdf 2212KB]

Fair wages and childcare: promoting dignity and equality by empowering workers in the private sector in Jordan