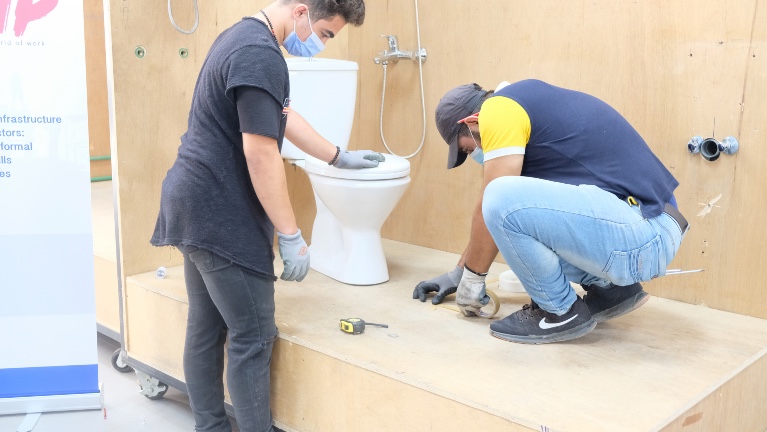 “I consider myself a school dropout, and since I left school, I have been my dad’s companion in his work, which is plumbing. But I was with him because of the lack of anywhere else to go,” said 18-year-old Lebanese plumbing trainee Samir Fcheich.

“Then, I heard in my friends’ group about the training sessions available at the Safadi Foundation, and among them was plumbing. I preferred to learn that profession professionally, and that’s the reason I joined the Skill-Up project,” said Fcheich, who participated in competency-based training implemented in collaboration between the ILO and the Safadi Foundation, a Lebanese NGO that provides skills training.

After completing the advanced vocational training course in plumbing, Fcheich found that he was capable of helping his father in his work, rather than simply accompanying him. “I can now work on my own too, and I’ve done that several times already,” said Fcheich.

Fcheich said his experience during the training sessions was successful and positive. He said the training increased his self-confidence, and he can now better benefit from his father’s long experience in plumbing. He can also help support his family financially, as he can now take jobs on his own.

Fcheich is one of the 100 Syrian and Lebanese youth who received training under Skill-Up Lebanon – an ILO-development cooperation programme funded by the Norwegian Ministry of Foreign Affairs to support reform of the skills system in Lebanon. Skill-up Lebanon focuses on mainstreaming entrepreneurship education through the ILO’s Know About Business (KAB) programme, and on training Lebanese and Syrian youth on market relevant skills.

Following the Beirut Port blast on 4 August 2020, and in response to emerging needs following the blast, two additional vocational training programmes for plumbing and glass installation were introduced under the Skill-Up Lebanon project. The training targeted 35 Syrian and Lebanese youth who, as part of their on-the-job training, had the opportunity to support the rehabilitation of the affected homes and businesses in Beirut.

“I enjoyed the training sessions with Mr. Ahmad a lot, and I felt I was really benefiting from his experience. However, the experience of helping with the rehabilitation of Beirut was on another level. I felt I was truly in my element, doing what I am good at, and helping people in need. I am glad I was among the beneficiaries who were chosen to help in the relief efforts in Beirut following the disastrous blast,” concluded Fcheich.