AMMAN, Jordan (ILO News) - Known for world-class historical sites such as Petra and natural wonders like the Dead Sea, Jordan is a Middle Eastern, Arab country with a population of nearly 8 million. More than half (55 per cent) of the population is under 15 years of age, making Jordan demographically youthful. In contrast, only slightly more than one fifth (22 per cent) of Italy’s population is made up of children in this age group.

Jordan is said to experience 330 days of sunshine per year. But all is not sunny for the 30 per cent of Jordanian youth who are unemployed and seeking employment. “Any society is burdened by a generation without hope of stable work. Poor employment in the early stages of a young person’s career can make lifelong job prospects gloomy,” said Nayef Stetieh, President and Chief Executive Officer of Jordan’s Business Development Centre.

While Jordan has a culture of self-employment, entrepreneurship education has been largely absent. Only about five per cent of micro, small and medium enterprise owners are run by young people. The International Labour Organization (ILO) set out to fill this void by teaming up with Jordan’s non-profit Business Development Centre, its Ministry of Education and its Ministry of Higher Education and Scientific Research, to offer potential young entrepreneurs the training they need to get a head start in setting up their own businesses.

The “Know about Business” (KAB) project was launched in Summer 2011 and is scheduled to finish at the end of 2016. It was supported by the Business Development Centre, drawing on funds provided by the Government of Canada.

The training on KAB covers all aspects of business management in a simplified and participatory manner. It teaches youth entrepreneurial skills and works on developing positive attitudes towards self-employment as a potential career option.

Its aim is to reach 4,500 young students over the 2013-14 and 2014-15 academic years. The impact of the project is being evaluated and a decision will be taken as to whether it will be integrated into the national curricula of secondary vocational education and community colleges.

Previously interested only in social entrepreneurship, 16-year-old Ayat Mahmoud Jamahneh broadened her thinking after completing the KAB programme, which for her created a very exciting and positive learning atmosphere.

“Today, I am aware of the importance of having my own business and its impact on generating income. KAB helped me build self-confidence in addition to new skills,” she says. She learned the legal and financial aspects of setting up a new, independent business in addition to “listening skills, positive thinking and how to deal with customers.” Jamahneh plans to start her own women’s beauty centre in Irbid.

Seventeen year old Abudllah Ayed Alshamayleh is studying for a future career in electrical engineering for cars and other vehicles. In the KAB programme, he “gained new knowledge in running the financial aspects and marketing a business. This will help me in developing and expanding our family business,” says Alshamayleh. “I also learned new tools to attract customers and gain their loyalty through professional treatment, honesty and handling their demands efficiently,” he added.

He has already applied his skills during summer breaks while working as a sales manager and improving the interior design and products of his brother’s cleaning products, chemicals and perfume business.

An instructor working at Al Shareef Abdelhameed Sharaf Industrial Boy’s School, Mujahed Mohammed Mujahed, whose specialization is electrical engineering for cars and other vehicles, took 90 hours of teacher training to be able to deliver the KAB course. “The content, skills and information KAB provides are not normally included in any school’s curriculum, at any level. It is needed for all community members as they lack such information,” he emphasized. The 29-year-old teacher was delighted to develop his own knowledge about starting a business.

A veteran teacher at a secondary school for females and Ministry of Education employee, Jamilah Ahmad Khairi Musleh noted the considerable effort involved in preparing each class of the comprehensive KAB course. “Despite the hard preparation process, the very interesting sessions and games made for a very dynamic and interactive learning environment. It embedded the information inside students’ minds as it was introduced in a simple manner with lots of case studies,” she says.

Besides opening doors for these students and teachers, the KAB project was able to develop new topics related to green enterprises and decent work; mainstream gender and disability concepts; train, assess and certify 13 trainers as national KAB facilitators who can teach KAB without ILO supervision; and deliver certificates to 549 students who completed the KAB course.

KAB graduates think about the future, which is definitely brighter, in a different way, knowing that starting a venture is within their reach and having the confidence to overcome the fear of failure. 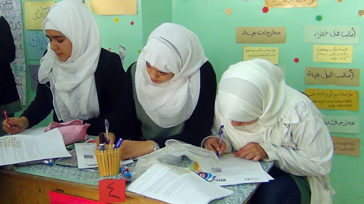 Introduction of “Know About Business” at the Development and Employment Fund

ILO in the Arab states