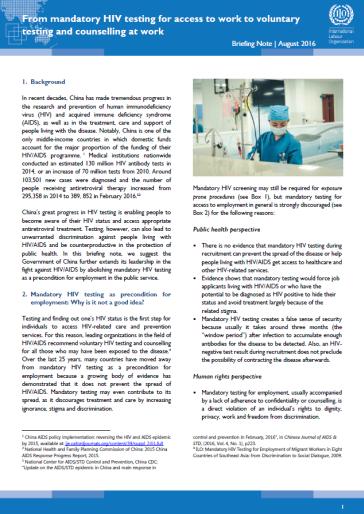 Download:
China has made tremendous progress in the research and prevention of human immunodeficiency virus (HIV) and acquired immune deficiency syndrome (AIDS), as well as in the treatment, care and support of people living with the disease. Medical institutions nationwide conducted an estimated 130 million HIV antibody tests in 2014. Around 103,501 new cases were diagnosed and the number of people receiving antiretroviral therapy increased from 295,358 in 2014 to 389, 852 in February 2016.

China’s great progress in HIV testing is enabling people to become aware of their HIV status and access appropriate antiretroviral treatment. Testing, however, can also lead to unwarranted discrimination against people living with HIV/AIDS and be counterproductive in the protection of public health. In this briefing note, we suggest the Government of China further extends its leadership in the fight against HIV/AIDS by abolishing mandatory HIV testing as a precondition for employment in the public service.

Critical steps are required to break up the institutional barriers at both national and local levels in China, in particular the following:

● Revise relevant medical standards for recruitment in the public service that contain discriminative clauses, especially mandatory HIV testing.
● Establish social dialogue for tripartite partners (the MoHRSS, the All-China Federation of Trade Unions and the China Enterprise Confederation), as well as other relevant government ministries, to disseminate awareness of HIV/AIDS as a workplace issue and compare China’s experience with international practices.
● Review the application of Article 30 of the Employment Promotion Law in both the public and private sectors.
● Develop specific laws banning direct and indirect discrimination in employment and occupation.