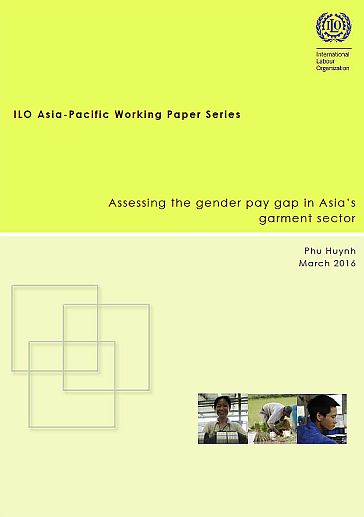 Download:
This paper presents the gender pay gap in the garment, textile and footwear industry in nine developing Asian economies – Bangladesh, Cambodia, India, Indonesia, the Lao People’s Democratic Republic, Pakistan, the Philippines, Thailand and Viet Nam. It finds that women earn less than men in eight of the nine countries, with the imbalance particularly sizeable in India and Pakistan. Some of the pay gap can be attributed to differences in factors such as age and education, but discrimination also appears to be a contributing determinant. Women are also more likely to be at the lower end of the wage ladder. Applying standard Mincerian wage regressions and the Blinder-Oaxaca decomposition method, the paper presents empirical evidence on gender wage gaps and wage premiums in the industry, and discusses measures that can help reduce gender disparities and discrimination in the sector.