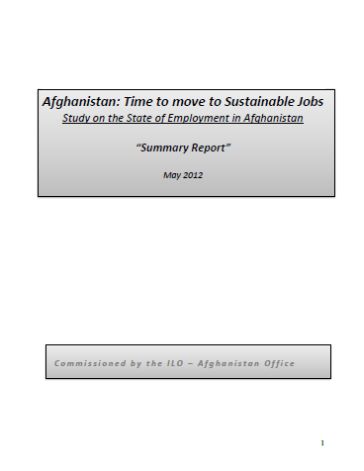 Download:
This study calls for a longer term approach to socio-economic development in Afghanistan, in which employment and decent work take a central role. While this is indeed a major challenge given the economic and political uncertainties facing the country, a balance needs to be found between the urgency of stabilization and creating more sustainable jobs that lift people and their families out of poverty.

This brief study attempts, despite the continued lack of reliable labour market data and information systems, to provide a glimpse of the current state of employment in Afghanistan, highlighting key areas of concern and making a series of policy recommendations that it is hoped will be of value to the Islamic Republic of Afghanistan as well as its international supporters.