In Cambodia, the ILO has promoted labour-based appropriate technology (LBAT) for the effective means to generate employment by improving and maintaining essential rural infrastructure since 1992. Already in 1992, the ILO introduced LBAT to rehabilitate Cambodia’s secondary and tertiary roads. Work began in the north-west provinces in response to requests from UNHCR, whose task was to resettle people and distribute food to refugees returning from Thailand. Training of staff, such as engineers, technicians and supervisors started in the refugee camps. During the 1990s, the ILO constructed and maintained some 800 km of rural roads using labour-based work methods. It also rehabilitated some 90 km of irrigation canals, and participated in clearing and cleaning of the environs of the Angkor Wat World Heritage Site. As a result of the success of these strategies for rebuilding local infrastructure, a number of other donors initiated similar projects applying LBAT as developed by the ILO.

The competitiveness of the technology and approach was later confirmed by ILO’s regional programme ASIST-AP through a study comparing the use of labour-based technology with conventional equipment-intensive work methods (ref: Jobs or Machines).

Equally, the Government of Cambodia endorsed LBAT as the technology of choice for its rural infrastructure works programme. In support of this decision, the project "Technical Assistance to the Labour-Based Rural Infrastructure Works Programme”, known as the “Upstream Project”, was formulated. This four-year project, running from 1998 to 2002, had four capacity building targets:

The Asian Development Bank (ADB) funded the ILO Integrated Rural Accessibility Planning IRAP/GIS project in Cambodia which was successfully completed in October 2006. An EIIP technical assistance team worked with the government counterpart technical staff in Phnom Penh and project implementation units in four provinces to develop and implement local level participatory planning activities to identify investment priorities in rural infrastructure and public services. The IRAP/GIS Project’s main objective was to institutionalize IRAP in the Ministry of Rural Development (MRD) and build a sustainable capacity to apply the technology nationwide and build local capacity for application in the provinces of Battambang, Siem Reap, Banteay Meanchey and Oddar Meanchey. The Project provided hands-on skills development to MRD technical staff seconded to the IRAP/GIS Project. MRD institutionalized the IRAP unit in its Planning Division.

The Mainstreaming Labour-based Road Maintenance Pilot Project, funded by the Asian Development Bank through its Japan Fund for Poverty Reduction (JFPR) and the Government of Cambodia, demonstrated (i) how the application of labour-based road works technology in maintaining public roads can increase the direct poverty reduction impact of road works and (ii) how to efficiently organise management of road maintenance funds through decentralised channels, essentially through the provincial authorities. With the initial start-up in 2006, this project provided a series of training courses to local government staff and small-scale private contractors in periodic and routine maintenance works, including key subjects such as labour-based road works technology, maintenance, quality assurance, material testing, asphalt technology and contracts management. The training was conducted through formal classroom session as well as on-the-job training carried out on full-scale training work sites.

Through the introduction of routine maintenance of existing roads in four provinces in North-west Cambodia, the project clearly demonstrated how an affordable road maintenance programme can be established on public roads relying on local resources including local labour. The benefits of this scheme was twofold – while providing essential maintenance on the public road network, the application of labour-based work methods provided residents in the adjacent villages with cash employment.

A central part of the project outputs was also to establish sound practises for the application of low cost bituminous surfacing of secondary and tertiary roads on which traffic levels required improved surface treatments. The project introduced low-cost bituminous surface seals using innovative specifications making effective use of locally available natural gravels as aggregate instead of more expensive and scarce crushed stone transported from long distances at high costs.

The success of the village infrastructure works in Chamka Samrong is now being demonstrated in Daksorsor village in the municipality of Battambang. Infrastructure improvements include access roads, streets, drainage, water supply and sanitation. Works are carried out using local contractors and local labour from the village.

The ILO has recently joined the efforts of the Government to establish a comprehensive social safety net in which a public works component is envisaged. This initiative is still at a preliminary stage of policy of strategy formulation through a working group establish under the Coordinating Office for Agriculture and Rural Development (CARD) within the office of the Council of Ministers. The purpose of the SSN is to establish a permanent structure within Government to improve social protection to poor and vulnerable households through employment-intensive public works schemes and conditional and unconditional cash transfers. 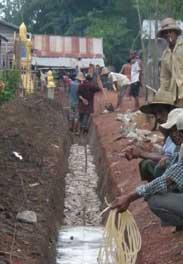 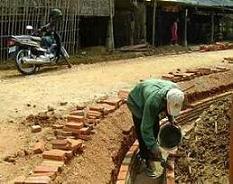 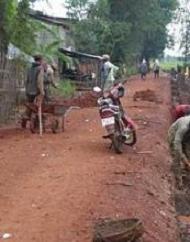 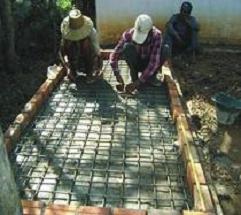