By Karen Emmons
BANGKOK (ILO News) - For two years I have been travelling around Asia with the photographer Steve McCurry to document the abuse some domestic workers endure in the homes of their employers, both in their own countries and abroad.

We have found cases of child labour, forced labour, human trafficking, rape, starvation, excessive working hours, little or no pay and restricted freedom of movement and communication. We spoke to workers who had been beaten with pots, brooms, sticks and metal pipes. We heard of women coming home in a coma or a coffin.


The victims were female and male, young and old, educated and illiterate (and their abusers also varied – female and male, rich and middle-class, old and young). What united them was a toxic combination of desperation, born out of poverty, and a lack of legal protection; in most countries domestic workers are not protected by employment laws, and in some they are seen as no more than a form of ‘property’.
We met a Nepali woman who had been blinded from repeated beatings by her female employer in Saudi Arabia and had faeces rubbed into her face. An Indonesian woman’s back was heavily scarred – surreally in the shape of an angel’s wings – by boiling water thrown by her male employer in Malaysia. I tried to count the scars on another Indonesian woman’s body but lost track after reaching 20.
In Nepal we interviewed a pregnant woman who, when she told her female employer in Oman that her policeman husband had raped her, was thrown into prison for five months for seduction. Pregnant, she was in hiding because she feared her family would desert her. Another Nepali woman, hired by a family in Kuwait to look after 13 children, was beaten because she resisted working in the family’s brothel.

In a Hong Kong shelter an Indonesian woman told me how her female employer spoke to her: “Come here, dog. You are stupid. You are a dog. Helper, come here.” In the same shelter her compatriot recalled how, because of poor food, her weight dropped more than 30 pounds before she finally ran away.

A Filipina told how she had been given the top of a washing machine to sleep on. She giggled when explaining that her male employer liked to wash clothes at night, so she had to try and sleep as the machine churned and shook. What could she do? In Hong Kong (one of the few places in the world that actually has legislation covering domestic workers), the law requires domestic workers to live with their employers, even if their ‘room’ is a cupboard, a stairwell, a bathroom – or the top of a washing machine. 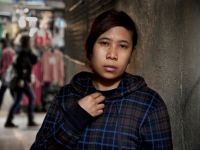 It’s not just poor employers and inadequate laws. Employment agents are also culpable in this abuse. We photographed an Indonesian woman in Hong Kong whose employer told her, “If I hit you and kill you, no one will know.” Her employment agency reacted by offering her a wage increase to stay. When she refused, the agency placed another domestic worker in that house. When that woman left, a different agent sent another Indonesian maid, Erwiana Sulistyaningsih, whose eight months of horrific abuse made international headlines and resulted in criminal charges against the employer.

Another Indonesian woman we met had run away in Malaysia because of beatings by her young male employer. She lost a tooth when he threw a shoe at her for heating up the “wrong” soup and her ear is now permanently deformed from his constant twisting. Yet the police took her back, and her employment agency threatened legal action if she tried to run away again. She is reluctantly considering going abroad again as a maid because her husband can find no work.

These are not uncommon experiences.

The ILO, which funded our photography project, estimates that there are more than 52 million domestic workers in the world. If even a tiny percentage experience the staggering meanness or criminal evil that we found, that is still likely to be a vast number.

Of course, many domestic workers have good experiences. And there are certainly many decent household employers, in every country. But we want abusers to know that what goes on behind their closed doors can’t be kept a secret.

Steve McCurry and I wanted the general public to see how such abuse scars lives as much as bodies. Steve, who took the National Geographic cover photo “Afghan Girl”, knows how portraits can bring an issue to life, to make the case for change compelling and unforgettable. Together, we wanted to support the campaign for domestic workers to enjoy the same legal and effective protection as other workers.

In 2011 a new ILO Convention specifically covering the rights of domestic workers came into force. Thus far it has been ratified by 16 countries – only one (the Philippines) in the Asia–Pacific region and none in the Middle East. Ratifying Convention No. 189 is important, not just because it obliges governments to bring their national laws and enforcement systems into line, but also because it sends a message to societies that domestic workers have rights as other workers do.

No one should work the way the people we photographed have worked.