The Report for 2018-2019 is themed "Understanding What Lies Behind Gender Pay Gaps". The two-part Report analyses developments in global wages and gender pay gaps. The global wage growth in 2017 was the lowest in the last 10 years. In real terms, it was 2.4% in 2016, but merely 1.8% in 2017, the lowest growth rate in real wages since the global financial crisis of 2008. 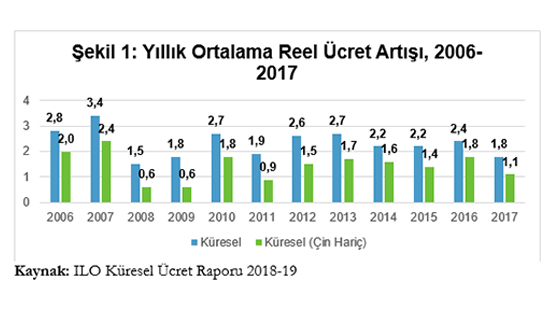 - Gender pay gaps striking, women still paid less Based on an analysis of 70 countries and 80% of wage earners worldwide, comparing women and men in homogeneous subsets by education, age, hours worked (full-time vs part-time) and public vs private sector using weighted measures, the study reveals that global gender pay gap stood at 18.8%. The gap was 12% in Turkey, 2.7% in Belgium, 11.7% in Norway, 13.3% in France and 16.6% in the United Kingdom. Gender pay gap remains a challenge for all countries to surmount.

The report also shows that traditional explanations, such as differences in the levels of education between men and women who work in paid employment, play a limited role in explaining gender pay gaps, and the "unexplained" part has a larger effect. In high-income countries, education has an impact of less than 1% in pay gaps. In other words, women are paid less not because they have lower education. On the contrary, women in wage employment have higher education levels than men.

Mothers tend to have lower wages compared to non-mothers due to a host of factors, including labour market interruptions, reductions in working time, employment in more family-friendly jobs with lower wages, or discrimination in hiring and promotion. Fathers on the other hand earn more than non-fathers through pay supplements on account of fatherhood. In sum, mothers are wage-punished for being mothers, while fathers are wage-rewarded.

By its 29.6%, Turkey is the country with the highest motherhood penalty among both upper-middle and lower-middle income countries, and hosts the most disadvantageous conditions in this regard. Working Turkish mothers pay the highest penalty by receiving 30% less in wages than non-mothers. Motherhood also causes labour market interruption, and women's permanent exit from labour markets. Women's participation in labour force is lower than men in all countries worldwide regardless of pay level or age group. Further disadvantageous are women of 25-35 age group whose participation in labour market goes down for first-time motherhood generally in this period. Unfortunately, most women of 25-35 age group who leave the labour market for motherhood do not return.
- Director of the ILO Office for Turkey Özcan: "Gender pay gap is a biggest manifestation of social injustice. Denying women of the pay they deserve is a worst form of violence against women"
Commenting on the report, Mr. Numan Özcan, Director of the ILO Office for Turkey said: "Turkey is the country with the highest motherhood penalty among the 70 countries in the report. Comparing the mothers and non-mothers, there is 30% of pay gap between two groups. The penalty for being a mother in Turkey is to receive less wages by 30%. Turkish women pay the highest penalty for motherhood in the world."

"It is of course possible through policy measures to prevent women staying away from work life and earning less, and reduce the motherhood penalty" said Özcan and suggested that positive steps in this direction could include an equitable sharing of family responsibilities between men and women, scaling up child and elderly care services, formulating and effectively implementing programmes that promote women's return to work after birth, and promoting fatherhood leave.

Özcan stressed that "reducing gender pay gaps requires a broader set of measures" and further elaborated:
"It is critical to correctly identify in what groups of income distribution and how the pay gap occurs if we are to formulate solution-oriented policies. For example, extending the minimum wage on a broader base may have equitable outcomes for low-income groups. Extending collective agreements to cover vulnerable groups may lead to more equitable income distribution for high-income groups. Removing barriers for women to senior positions may contribute to achieving income equity in the top income groups. Identifying the source of problem correctly is critical to build the solution. Combating informal employment which women often face will certainly provide radical solutions. Improving girls' access to education and eliminating stereotypes in education and occupation will facilitate access to decent jobs and wages in the longer term. Policies should be underpinned by encouraging girls to study science, technology, engineering and mathematics. It is only by this route they can access better paid jobs. Finally, occupational segregation expressed usually as "woman's job" or "man's job" should be eliminated; men should be encouraged to participate in occupations such as teaching, healthcare etc. where workers are predominately women."

Reminding that the ILO Office for Turkey has been undertaking comprehensive work with the slogan "we are equal and together" to enable women to have their deserved place in society and in the world of work, Özcan stated that ILO was ready for cooperation with all stakeholders in the present and future initiatives. 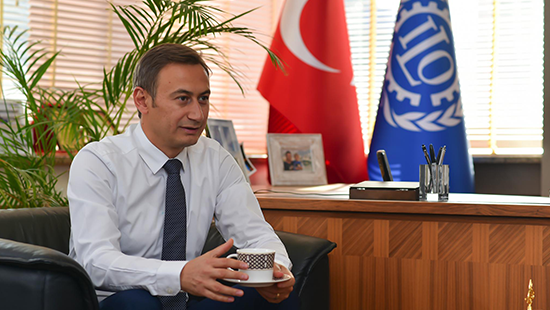