The workshop “Labour Market Problems Faced by Syrian Workers, Employers and Entrepreneurs and Suggestions for Solution” jointly organized by ILO-Turkey and Syrian Friendship Association took place in Çukurambar Holiday Inn Hotel in Ankara on 13 June 2016. Opening speeches at the meeting were delivered by Numan Özcan, Director of the ILO Office in Turkey; Kadriye Esra Aygün, President of Syrian Friendship Association; Atay Uslu, Chair of the TBMM (Grand National Assembly of Turkey) Sub-commission for Refugee Rights, and Ayşe Türkmenoğlu, Senior Advisor to the President of Turkey.

ILO Ankara Director Numan Özcan drew attention to the necessity of supporting, besides humanitarian aid, the subsistence of and decent work for Syrians in the face of the present refugee crisis, and stressed that it Turkey took an important step for the formal employment of Syrians under temporary protection with the recent Regulations on Work Permits. This new legislation will help the transition of Syrians from informal to formal employment and increase opportunities for decent work.

Özcan remarked that there is a significant increase the number of enterprises with Syrian partners, adding that facilitation of investments and business initiatives by Syrians will contribute to the employment, foreign trade, and economic growth. Özcan concluded his speech by pointing to various activities by the ILO Office aimed at contributing to smooth access to income sources, labour markets, and formal/decent employment by refugees in Turkey. 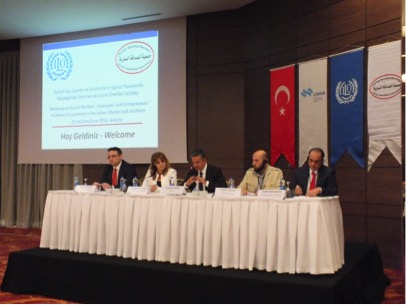 The workshop continued with a panel discussion on Syrian workers’, employers’ and entrepreneurs’ problems encountered in the labour market and solutions. Moderated by Hakan Çelik, the participants of the panel discussion were Deniz Ersöz, Deputy Director General of Labour from the Ministry of Labour and Social Security; Kadriye Esra Aygün, President of Syrian Friendship Association, and representatives of Syrian workers and businessmen. Following the panel discussions, the participants were divided into two working groups in order to identify the problems of workers and employers in the labour market, respectively, and to develop suggestions for solution. The major problems that participants focused on, as follows: Opinions and outputs from working groups will be shared with participants and relevant institutions. 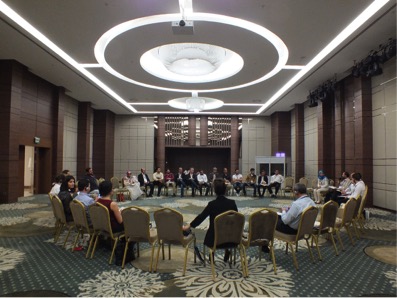 "Workshop on Problems Faced by Syrian Workers, Employers and Entrepreneurs in Labour Market and Suggestions for Solution" report is published