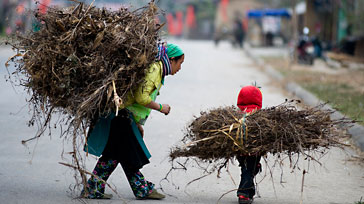 What is child labour?

Considerable differences exist between the many kinds of work children do. Some are difficult and demanding, others are more hazardous and even morally reprehensible. Children carry out a very wide range of tasks and activities when they work.

Not all work done by children should be classified as child labour that is to be targeted for elimination. Children’s or adolescents’ participation in work that does not affect their health and personal development or interfere with their schooling, is generally regarded as being something positive. This includes activities such as helping their parents around the home, assisting in a family business or earning pocket money outside school hours and during school holidays. These kinds of activities contribute to children’s development and to the welfare of their families; they provide them with skills and experience, and help to prepare them to be productive members of society during their adult life.

The term “child labour” is often defined as work that deprives children of their childhood, their potential and their dignity, and that is harmful to physical and mental development.

It refers to work that:
In its most extreme forms, child labour involves children being enslaved, separated from their families, exposed to serious hazards and illnesses and/or left to fend for themselves on the streets of large cities – often at a very early age. Whether or not particular forms of “work” can be called “child labour” depends on the child’s age, the type and hours of work performed, the conditions under which it is performed and the objectives pursued by individual countries. The answer varies from country to country, as well as among sectors within countries.

The worst forms of child labour

Whilst child labour takes many different forms, a priority is to eliminate without delay the worst forms of child labour as defined by Article 3 of ILO Convention No. 182:

Labour that jeopardises the physical, mental or moral well being of a child, either because of its nature or because of the conditions in which it is carried out, is known as “hazardous work”.

The Context of the Child Labour Problem in Turkey

In 1992 Turkey was one of the initial six countries to undertake direct action to combat child labour through IPEC programs and assistance. The Memorandum of Understanding between the Government of Turkey and the ILO was signed in 1992 and was extended till September 2006. There was a total number of 101 action programmes implemented from 1992. IPEC projects carried out over the last 12 years have reached approximately 50,000 children. Sixty percent of these children have been withdrawn from work and placed in schools. The remaining 40 percent have benefited from improved working conditions and health, nutrition and vocational training services. Furthermore, approximately 25,000 families have received counselling services and assistance. The strategies developed and objectives of the Programme are coherent with national policies and objectives and reinforce and strengthen existing national structures.

The problem of child labour is one that Turkey , as every country in transition, needs to address. The problem needs to be viewed in terms of demography, educational levels, economics and social development.

As a country, Turkey is in transition from a rural to an urban setting and from an agricultural to an industrial economy. The trend of migration to major metropolises, together with the disintegration or non availability of familiar social support network, means the phenomenon of working children is becoming more apparent, particularly, the numbers of children working in marginal sectors and on the streets in order to help support family income levels.