Lima – A Regional Strategy for Socioeconomic Integration, aimed at reducing vulnerability and maximizing the contribution of millions of refugees and migrants from Venezuela in Latin American and Caribbean countries, was launched by UNDP and ILO with the objective of facilitating their sustainable inclusion in host countries.

The two UN agencies highlighted that it is necessary to face "the most serious migration crisis in the history of the region", generated from 2015 when "more than 5.5 million people had to leave their country as a result of the economic, social and political crisis facing Venezuela".

"The region has to face new challenges in terms of mobility of people, access to basic services and protection, inclusion in labor markets and social cohesion," highlighted the Directors for Latin America and the Caribbean of UNDP, Luis Felipe López Calva, and ILO, Vinícius Pinheiro.

The two Regional Directors added that "the Socioeconomic Integration Strategy seeks to respond to the increasingly pressing challenge of migration from Venezuela, particularly in the context of the COVID-19 pandemic”.

UNDP and ILO led the development of the strategy with the support of the Coordination Platform for Refugees and Migrants from Venezuela (R4V) and the Quito Process, regional mechanisms that will promote its dissemination and implementation in the Latin America and Caribbean region.

The strategy is aimed at the main host countries of the refugee and migrant population, particularly government institutions with some degree of competence in the socioeconomic integration of this population and employers' and workers' organizations, with a view to promoting social dialogue in this area.

It was stressed that unlike humanitarian aid that seeks to support people in their basic needs, a socioeconomic integration strategy is aimed at making them "promoters of their own livelihoods, by fostering their sustainable inclusion in host communities and their contribution to local economies."

"On numerous occasions, destination countries see refugees and migrants as a burden that affects the provision of public services and the national and local fiscal balance. However, international experience shows that migrants, including refugees, also contribute to the development of host countries," says the UNDP-ILO document.

"Turning migration into a factor of sustainable development requires public authorities, both at the local and national levels, to promote the socioeconomic integration of the refugee and migrant population”.

The Strategy document stresses that "for the successful implementation of the seven axes outlined above, it is essential that the countries of the region strengthen cooperation mechanisms and adopt regional policies" in areas such as human mobility and regularization, mutual recognition of qualifications and skills, labor intermediation and social protection.

One of the main objectives of the strategies is to generate decent work opportunities. The document highlights that "the majority of Venezuelan migrants and refugees, regardless of their educational level and work experience, are working in the informal sector".

"The most frequent occupations are: in commerce, street sales, customer service, restaurants and in construction; a majority number of women are relegated to domestic and paid care work."

During the launching ceremony, two "pilot projects" to be implemented in Guyana and Colombia were announced, with which the implementation of the Regional Strategy will begin.

The launching ceremony was attended by Eduardo Stein, Joint Special Representative of UNHCR and IOM for Venezuelan Refugees and Migrants, and Vitaliano Gallardo, Director General of Peruvian Communities Abroad and Consular Affairs, Ministry of Foreign Affairs of Peru, which holds the Pro-Tempore Presidency of the Quito Process.

The event also included the participation of Felipe Muñoz, Head of the Migration Unit of the Inter-American Development Bank (IDB), and Juliana Manrique Sierra, Labour Director of the National Association of Employers of Colombia, in representation of the International Organization of Employers (IOE).

Joseph Hamilton, Minister of Labor of Guyana, and Lucas Gómez, Border Manager of the Presidency of Colombia, participated on behalf of the countries that will inaugurate the implementation of the strategy. 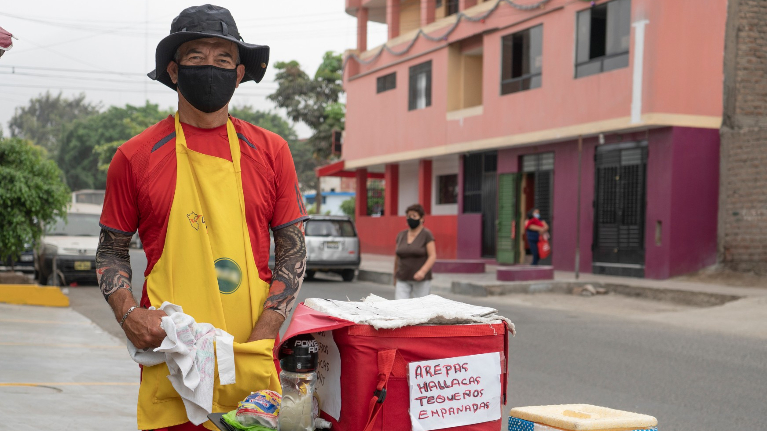