Dar es Salaam. On 1 April 2022, the National College of Tourism (NCT) campus in Dar es Salaam celebrated the graduation of 105 apprentices from the modular apprenticeship programme, specialised in the hospitality and tourism sector. The event was momentous as it was the first graduation of the new shorter-term (nine-month-long) apprenticeship programme at NCT, sponsored by the Government of Tanzania, through the Prime Minister's Office Labour Youth, Employment and Persons with Disabilities (PMO-LYED).

To address the skills gaps and skills mismatch issues, the Government of Tanzania, in collaboration with other stakeholders, including the ILO, is implementing the National Skills Development Programme, in which apprenticeship, internship, and recognition of prior learning (RPL) programmes are keys part of it, according to the guest of honour, the Director of Productivity Promotion Unit in the President's Office; Labour, Youth, Employment, and People with Disability, Mr. Yohama Madady, during his opening speech. The National Skills Development Programme provides a framework for the enhancement of skills development and employability in Tanzania, focusing on the key priority sectors, including hospitality and tourism. He added:

“According to the Five-Year National Development Plan (2021 / 22-2025 / 2026), the Office of the Prime Minister, through the National Skills Development Programme, has been directed to provide technical and vocational training to 581,000 youth in total over five years, equivalent to 136,200 young people per year. We are happy to see that apprenticeship programmes such as these, are producing skilled Tanzanians to join the hospitality and tourism labour force.”

The guest of honour encouraged graduates to work hard and take up the best positions in the country’s hospitality and tourism sector.

The CEO of NCT, Dr Shogo Mlozi, congratulated the new graduates and lauded them for securing jobs or internships even before graduating, which is a great achievement as many graduates struggle to secure jobs months or years after graduating. She perused by thanking the Government of Tanzania and the ILO for supporting apprenticeship programmes across the country and noting the growing popularity of such programmes:

“The ILO is currently supporting Tanzania’s first degree-level apprenticeship programmes with the Institute of Accountancy Arusha (IAA) and the Water Institute. The NCT is also in the process of developing its first Bachelor’s in Hospitality and Diploma in Event Management, both in apprenticeship, and we look forward to the continued support of the ILO in this process.”

She reasserted the commitment of NCT to work with both, the government and the ILO, towards accomplishing the country’s National Skills Development Programme. Dr Shogo however highlighted the need for more coordinated efforts to raise public awareness of the variety of vocational training programmes that are now available to Tanzanians as well as a clear mapping of current and future training needs in the country.

The Modular Apprenticeship Programme in Hospitality and Tourism is implemented by NCT, sponsored by the Government of Tanzania, with technical support of the ILO, through the Global Programme on Skills and Lifelong Learning (GPSL3) in Tanzania, which is financially supported by the Norwegian Agency for Development Cooperation (NORAD). 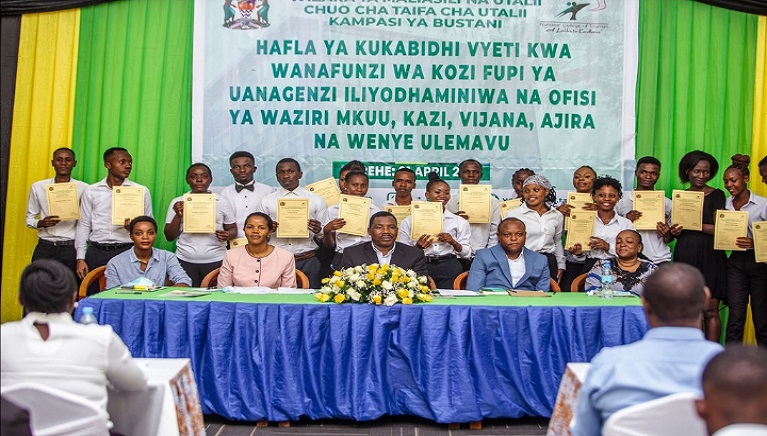