Abuja (ILO News) - The Director of ILO Country Office, Abuja, Mr Dennis Zulu, called on the Federal Government of Nigeria to ensure the successful implementation of the National Policy on Labour Migration.

Zulu made the remarks in his goodwill message during the unveiling ceremony of National Policy on Labour Migration and inauguration of the Labour Migration Technical Working Committee (TWC) and Social Partner Advisory Committee (SPAC) on 18th August 2016.

Mr. Zulu stated that human desire to seek decent employment and livelihoods is at the core of the migration-development nexus. He stated that as more people cross borders to work in the coming years, fair and effective migration policies such as “the one being launched today” that protects the rights of migrant workers and reduce the costs of labour migration will be essential.

The National Policy is also necessary for achieving economic growth and enhancing development outcomes for migrant workers and their families, both for countries of origin and destination. He stated that the ILO works with governments, employers’ and workers’ organizations to improve labour migration policies that can achieve more equitable development.

This policy focuses on the needs of working men and women to generate benefits towards development and support of their families and communities in countries of origin and destination.

The honourable Minister of Labour and Employment, Senator (Dr.) Chris Nwabueze Ngige, stated that the voluntary or forced movement of people within or beyond boarders constituted a complex process presenting some of the most intricate inter-relationships of policy concerns for governments around the world.

He listed some of the triggers of migration to include challenging economic and security situations, specifically, globalization, demographic shifts, conflicts/insurgency, income inequalities and climate change amongst others. He stated that “this trend is likely to persist in the foreseeable future”. This according to him made migration management one of the critical challenges for Nigeria.

The Honourable Minister acknowledged that International Migration indeed represented an opportunity for Nigerians to provide a better life for themselves and their families. He stated that Nigerians are involved in international migration to pursue educational aspirations, improve their professional skills and prospects or satisfy the desire for personal development through the adventures and challenges that come with living abroad.
While he regretted that most migrations in the past decades took place due to high unemployment rates and inability of the economy to generate adequate number of decent jobs, he however, urged Nigerians not to migrate out of compulsion.

He was also alarmed with the loss of lives of many young Nigerians who died in the Mediterranean and in the dessert while attempting to cross into Europe, stating that such incidence was of “utmost concern to the administration of President Muhammadu Buhari as no responsible government would sit back and watch the depletion of its country’s most critical factor of production and national development”.

He therefore emphasized migration in the conditions of freedom, dignity, equity and security in order to boost the economic and social development of the countries of origin and destination. He thanked the International Labour Organization (ILO) and International Organization for Migration (IOM) for their financial and technical support.

Two committees, namely, the Technical Working Committee (TWC) and Social Partner Advisory Committee (SPAC) were inaugurated during the unveiling of the National Policy on Labour Migration. The unveiling ceremony witnessed the strong participation of the Chief of Mission of International Organization for Migration and a representative of the European Union who also gave goodwill messages. Key national stakeholders were also present at the ceremony. 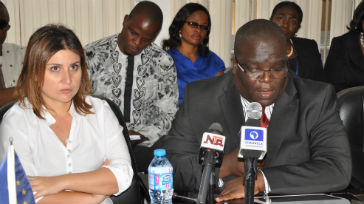