(ILO News) Harare: When the project began in 2014, Mary was selected as a beneficiary, based on her family’s apparent incidence of poverty. While they managed to eke out a living through subsistence farming, she was unable to give her children and husband the life she believed they should have. Her family had school fees arrears, as well as debts dotted all over the community. When she harvested her first produce, she paid off these debts and began thinking of a life where she would have enough money to sustain her family, through growing onions. The rural electrification project was taking off in her village, and from her first harvest, Mary managed to only pay a small percentage of what was required.

After this first harvest, Mary invested back into the project and bought a larger quantity of onion seed to increase her yield. From that second crop, she harvested over 4 000kgs of onion, with a market price of $5 for a 22kg pack. She made a profit of $1,100, which she mostly used to meet her family’s needs. The biggest achievement she realised was to pay off the balance to get electricity to her home.

‘I know now that when I leave the project site, which is my workplace, I do not need to worry about having to search for firewood. I will be able to just come into my house and turn on a switch.’ Mary beamed proudly.
She further stressed that this improvement has wide ranging impact on herself and her children. One of them will be reduced fears for her daughter’s safety when she is collecting firewood in isolated wooded areas alone, which is one of her chores. Her daughter will also decrease the amount of time she has been losing collecting firewood and re-direct it to her school work.

In addition, all her children can now have the luxury of reading their school books using electricity and not strain their eyes under candlelight.

Mary also highlighted how bringing electricity to her home was a means of reducing the negative influences her children were generally exposed to. She noted:
‘Previously, I knew that my children would sometimes pass by the shops and peek into bars, which have televisions. Were they to get accustomed to such habits, this would have led to the normalising of negative behaviours associated with such environs. One of my biggest fears was that they would be comfortable in those surroundings and then become vulnerable to abuse. Now, I am planning to buy a television for my family to reduce exposure for them.’

Participation in the JPGE project has provided Mary with opportunities she would never had dreamt of. The family no longer relies on subsistence crops nor from money earned through casual labour in the neighbourhood. The community has also stopped looking at her and her family with pity, but has elevated her as an illustration of how any woman can transform into a thriving entrepreneur. She has become a proverbial ‘beacon of light’ to fellow beneficiaries, her family and the community at large.

Mary and her mother-in-law, Sara Chauke, who is also a beneficiary explain the different components to be installed in her home. 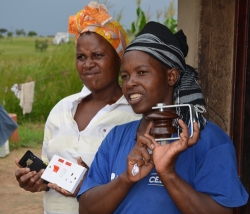