The project team conducted a two day capacity building programme on HIV policy development, HIV Voluntary Counselling and Training as well as on Membership recruitment.
Policy Development: On the first day of the workshop the SACCO was trained in HIV workplace policy development and their policy will be finalized in June.
Voluntary Counselling and Testing: During the second day the Project team, in collaboration with the Ministry of Health’s local clinic and the North Start Foundation Clinic conducted an HIV voluntary counselling and testing exercise involving both members of the SACCO and the local community. Two hundred and fifty (250) people were tested.
Membership Drive: The project team supported the SACCO in its membership drive efforts by participating in the distribution of one hundred and fifty T/Shirts and one hundred soccer balls with an MDG message inscribed on them to members of the local community. One hundred and fifty membership application forms were also issued to interested members of the community.
Savings and Credit: The SACCO now operates a bank account. To-date it has raised $11,000.00 (eleven thousand dollars) most of which has been loaned to members at an interest of 10%.
Income Generating Initiatives: To date, fifteen members of the SACCO have been able to borrow money from the SACCO either to start or grow their businesses such as restaurants, laundry services, cross border trading or welding.
Cross Border HIV Prevention Initiatives: The SACCO has conducted some HIV awareness raising initiatives in collaboration with peer educators on the Zambian side of the border. Through this initiative, which is conducted once every month, the SACCO has been able to interact with sixty six people on the Zambian side.
Business Opportunities: At the moment it would appear that the only large scale business opportunity that the SACCO can take advantage of is fish farming.
Follow-up action: Following this activity there is need for support in the implementation process, particularly with respect to the challenge fund and monitoring in order to ensure that our partners collect the required data and submit it on time. The ILO/AIDS Director indicated her willingness to support all the SACCOs to mobilize some IT equipment 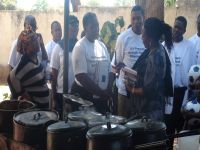