It was a pleasure and a honour for me, together with Philip Jennings and Reema Nanavati, to be member of the Global Commission on the Future of Work.

27 people from different regions, with very different backgrounds. I really enjoyed to make - as one of the ex-officio members - the relationship between the Governing Body and the Commission. We could count on the excellent co-presidency of president Cyril Ramaphosa and Prime Minister Löfven and the support from Director General Guy Ryder and the staff. I liked the richness of the analysis, the brightness of the ideas, the mutual interest in each other's experiences and views, the open discussion. It was an excellent idea and initiative of the Director General, later backed by the Governing Body, to open up the preparation of the Centenary and the discussion on the Future of Work towards other people, people with experience but not belonging to the ILO or the constituents. Added to this we could count on the commitment of the commissioners and all these elements made the report under the title ‘Work for a brighter future’ so strong.

The message is clear. The world goes through challenging times where a majority of the people in the world is left behind. This will worsen if we do not act, sure is that we are not ready for the Future of Work. Therefore the most ambitious social contract ever needs to be reinvigorated if we want to avoid more crises in our societies than we already have. It was remarkable how the Heads of state yesterday and the day before spoke about the creation of the ILO as the most important social contract of history. It was not just a slip of tongue or an exaggerated image to please the ILO-public.


The Commission didn’t drop one or more of the values and objectives of Versailles or Philadelphia. They remain valuable and they need to be reinvigorated, renewed, and strengthened.

The Commissions’ human centered agenda gives us in 3 pillars of action and 10 recommendations some strong points on how to deliver the social contract. One of the most important sentences can be found on page 28, I quote ‘It is not about adjusting people to fit into this new landscape. It is a bolder vision that seeks to steer the transformations under way towards a future of work that affords dignity, security and equal opportunity, expanding human freedoms’.

Let me remember towards the audience some of the strong points of the report.

In the Commission we had very profound discussions on issues that we wanted to see more outspoken in the report.
Notwithstanding some weak points, the report as a whole is very strong. I experienced how the report was welcomed by workers’ groups, in different member-states, by the civil society too. The report provides the constituents with the steppingstones for the Centenary Declaration.

A lot of ambition will be needed to reinvigorate the social contract that we need for these and future times and what encouraged us was the big support of the world leaders for a strong Centenary Declaration. 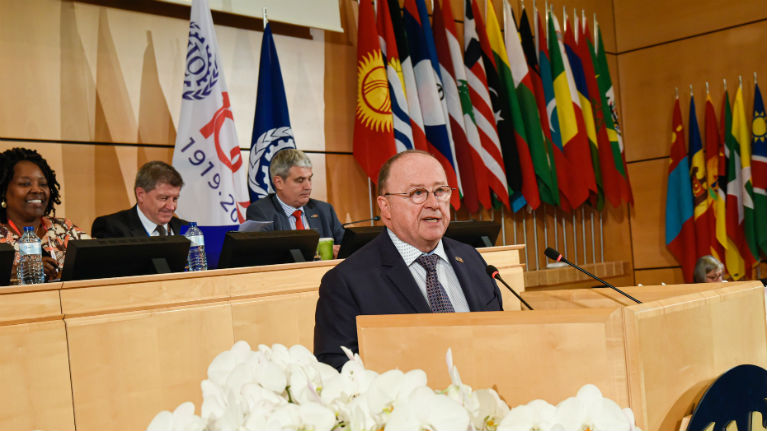