Geneva, 14 June 2012 (ACTRAV INFO)-The Chairperson of the National League for Democracy (NLD), Aung San Suu Kyi, held a side meeting with the Workers' Group during the 101st session of the International Labour Conference.

Before inviting her to take the floor, the Worker Vice-Chairperson of the Governing Body, Luc Cortebeeck, recalled the long struggle waged by the ILO, at the initiative of the Workers' Group, to eradicate forced labour in Burma and ensure respect for freedom of association there. Many workers over the course of many long years had given their support to the Burmese workers' struggle, he emphasized, and they “continue to do so today”. He also recalled the latest high-level ILO mission to Burma in March 2012. While welcoming the progress made in Burma, he recognized, on behalf of the Workers' Group, that “much remains to be done before human rights, rule of law and democracy can be said to have fully taken root in the country”. Finally, Luc Cortebeeck emphasized the priority given by the Workers' Group to the return of trade unionist Maung Maung to Burma and to respect for trade union rights there. 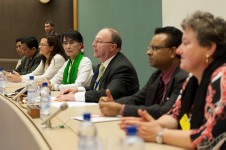 In her address, Aung San Suu Kyi called on the trade unions and the workers to strengthen their cooperation with their colleagues in Burma. “The links between trade unions and workers everywhere will strengthen our trade union movement within Burma,” she declared, “and open our workers up to the possibilities that places have already achieved for themselves.” She added that “not only concentrating on workers’ issues, but on the broader human rights issues, the broader issues of democratic institutions would help us in Burma greatly.”

Finally, the Burmese leader gave an assurance that the steps towards democratization in her country are “irreversible”.

A number of trade unionists made statements of support for Aung San Suu Kyi, notably those from South Africa, Italy, Japan and the International Trade Union Confederation.