ACTRAV INFO: What campaigns/activities/events has your organization launched since the Convention passed in 2011?

Marieke Koning: After the historical adoption of C189 and R201, ITUC launched on 19 December 2011 the ’12 by 12’ campaign aiming at 12 ratifications of C189 in 2012. It aims as well at a substantial increase of trade union membership rates among domestic workers and to set up and strengthen their unions. The ’12 by 12’ Campaign is organized in partnership with the International Domestic Workers Network (IDWN) and IUF as well with PSI, ETUC, Human Rights Watch, MFA, Caritas, Solidar and World Solidarity. Based on information from ITUC affiliates and from IDWN, IUF and ETUC, there are now ’12 by 12’ teams in 73 countries registered. They keep up the pressure on the ratification of C189 through social dialogue, listing C189 high on the tripartite agenda, organizing formal and informal meetings with members of parliament, and through actions as in Brazil where CUT plans to collect 1,200.000 signatures by March 8 2012 in support of C189. On 8 March we expect actions at national level to demand the ratification of C189. Many ’12 by 12 ‘ teams are coalitions of national centers, trade unions of domestic workers as well domestic workers, human rights, women and migrant organizations. Such as the ’12 by 12’ coalition in the Philippines, which we expect will be among the first countries to ratify the Convention, possibly before June 2012. Here, unions and other groups work consistently together when lobbying the government or organizing events. Or take Indonesia where the ’12 by 12’ coalition succeeded to get the domestic workers Bill back on the agenda of the Parliament by chaining themselves to the gates in front of the parliament while seeking media attention. Every week we receive updates of the ’12 by 12’ campaign teams on the ratification process/ expected changes in national legislation, as well on organizing domestic workers such as the creation of a new union for domestic workers by CUT-A in Paraguay. We created the ’12 by 12’ facebook page as a platform for the ’12 by 12’ partners and campaign teams. It is now being used to spread information and updates on C189/ national legislation quickly, to post photo and video clips or to generate actions at the local and global level. It has now up to 450 activists.

Elizabeth Tang: I remember just on the following day of June 16th when the Convention was adopted, Myrtle, the Chair of the International Domestic Worker Network, said to me: “now the hard work begins.” She has been really right! Since then, our domestic workers organizations have been as vibrant as before. We have had two regional conferences – in Asia and in Africa. The former was held jointly with the ITUC-AP and other CSOs, and the latter was purely domestic workers’ organizations meeting. But both were instrumental to develop common goals and priorities of actions in the regions. At national level, domestic workers organizations have been working very hard to press their governments to ratify the Convention and to ask them to make national laws to improve some of their rights. And many have already made important gains. For example, the Indian government has already made a national domestic worker policy. In South Africa and Kenya, the governments raised the minimum wage of domestic workers last December. In Chile, the government has just agreed to regulate the working hours of domestic workers. These are just a few examples. Others have participated in organizing the “12 by 12” campaign launching events in their countries. The ultimate goal of the IDWN is to build strong domestic workers organizations. Therefore in every campaign, action, meeting, etc., we must ensure they are part of an integral approach to strengthen their organizations.

Barbro Budin: The IUF African regional women's project has in close cooperation with the IUF-IDWN regional coordinator intensified its support for domestic workers. The recently established domestic workers network in Africa counts today 20 organizations and has helped to organize and recruit several thousand new members. All the African IUF affiliates representing domestic workers have actively promoted C189 through trade union and public workshops, tripartite meetings, and press conferences. The IDWN steering committee meeting was held in conjunction with the IUF African Regional and international conferences in Accra in December 2011. The Regional conference declared its full support for the work of the IDWN and for the ratification campaign. The promotion of C189 was also included in the agendas of the regional conferences in Asia/Pacific (October 2011) and Latin America (November 2011). Both conferences made firm commitments to assist domestic workers and their organizations in the ratification campaign and beyond. The Caribbean domestic workers' network launched in November is also fully supported by the IUF regional structures. The IUF has participated in various meetings to raise awareness of C189 and of course in the launching of the joint campaign with the ITUC: 12 x 12 in December in Brussels.

ACTRAV INFO: What was the top highlight moment of the past year and why?

Marieke Koning: The historical adoption of C189 and R201 on 16 June at the ILO Conference paves the way to end modern day slavery for domestic workers. When C189 is ratified and implemented in a substantial number of countries, millions of workers will be pulled out of the informal economy into formal jobs and enjoy the right to organize, form trade unions and engage in collective bargaining. This requires a long term commitment of the union movement to keep up the pressure on governments as well as to connect with and organize domestic workers. 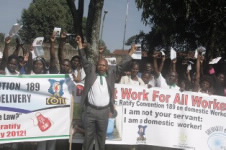 Elizabeth Tang: It is very hard to tell, there are so many I think. The adoption of the Convention on June 16 of course is the one. I am sure it is true for so many of us. When the adoption was confirmed, we rolled down a big banner calling governments to ratify the C189 now from where we were seated at the third floor and I saw many domestic workers were in tears. They were tears of joy.

Barbro Budin: The top of the top is of course the adoption of the convention on June 16, which is an unforgettable, historic day. The hard work of the domestic workers representatives throughout the whole ILO process, their closely united team across language barriers and their tears of joy when years of efforts finally were rewarded can never be forgotten. Another highlight was the IDWN Steering Committee meeting in Accra in conjunction with the IUF regional and international conferences. The activity reports shared by the SC members and the planning for the coming years clearly showed that the momentum and determination from June 16 was maintained and reinforced. The meeting between the IDWN representatives from various parts of the world with IUF delegates to the conferences and with the national Task Force for Domestic Workers in Ghana gave workers the important opportunity to exchange experiences on how to prepare for and promote the ratification of the convention. The Ghana TUC also organized a very well covered press conference with the IDWN steering committee members which hopefully helped to boost the campaign in Ghana.

Marieke Koning: ITUC is determined to have at least 12 ratifications of C189 in 2012, which includes clear commitments of governments to implement C189. This is the bottom line and we will not accept anything less. With our ’12 by 12’ partners and in cooperation with the ’12 by 12’ teams at national level we will continuously challenge governments to ratify C189. It must be noted that the adoption of C189 itself at the ILC in June 2011 did increase momentum for changes in national legislation in 2012. In Spain, UGT and CCOO negotiated a new law that significantly strengthens domestic workers rights. It went into effect on 1 January 2012. Very recently the government of Singapore changed their law which finally provides (migrant) domestic workers the right to one day of weekly rest – although there is still a long way to go to the actual ratification of C189. Important changes are expected this year in India, which plans to extend a number of labour laws to domestic workers, including the trade union Act and the Payment of Wages Act. All in all, we expect that national public events and lobbying governments will lead to a potential of at least 30 ratifications between 2012 and 2014. We invite all - who have not done so already - to take part in the ’12 by 12’ campaign. Now is the moment to bring about change for millions of domestic workers!

Elizabeth Tang: Every day I ask myself this question: what must I do to strengthen IDWN. IDWN is a domestic workers organization. Unless it is strong and effective, rights of domestic workers can never be guaranteed. This is true to every sector of workers. Therefore my first answer to you is to see that domestic workers organizations becoming stronger on the ground – with more members, effective leadership, women speaking for themselves and dues-payment structures. In doing so, I hope to achieve ratification of C189 in 3 to 5 countries. I think it is possible. Domestic workers are working very hard in many countries. They join organizations because they want to fight for the ratification and enactment of national laws to protect their rights. Then their organizations will be strengthened. This is to kill two birds with one stone.

Barbro Budin: We hope that the targets set by the 12 x 12 campaign will be achieved and exceeded through joint and coordinated efforts. Once the convention is ratified, strong domestic unions are needed to make sure that it is well implemented. Therefore we will accompany the IDWN in its efforts to strengthen the organizing and recruitment capacities of the domestic workers and their organizations and to further develop their negotiating and leadership skills.